As Wild Burma: Nature’s Lost Kingdom airs on the BBC, the forests documented in the series are increasingly being cut down, according to a new report by U.S. NGO Forest Trends. The report alleges that wide swathes of forest are being cleared in ethnic minority areas of Myanmar (also known as Burma), ostensibly for palm oil and rubber plantations. However after the lucrative timber is extracted, the report finds little evidence that the companies involved are serious about establishing plantations.

“For example, the government’s national palm oil development plan has allowed tens of influential Myanmar companies to receive large palm oil concessions in Tanintharyi Region in southern Myanmar along the Thai border, an area that holds the Mekong region’s last large expanse of lowland Dipterocarp rainforest. The result so far has been more logging than actual planting of palm oil seedlings,” reads the report.

Forest Trends argues that the government is using “crony companies” to extend control to remote, ethnic communities that are still rich in natural resources.

“Many of these forestland conversion projects are promoted to local ethnic communities and elected officials as development projects to bring about peace and spur economic growth. In practice, however, these development projects have more to do with the well-connected Myanmar private company getting access to timber and land,” reads the report. 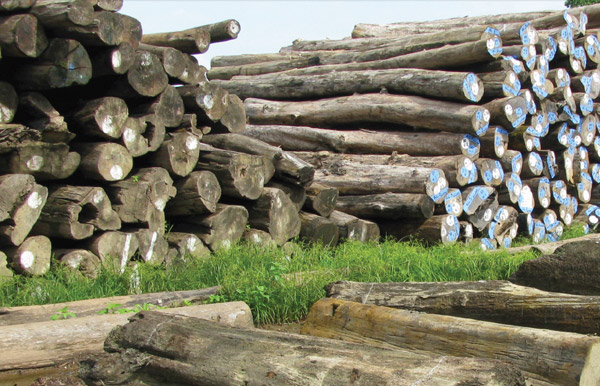 Logs in Myanmar. Most of the wood exported out of Myanmar is in the form of unprocessed logs, costing the country considerable economic gain. A ban on exporting raw logs is set to go into effect in April 2014. Photo courtesy of Timber Trade Flows and Actors in Myanmar: The Political Economy of Myanmar’s Timber Trade.

While the logging issue in Myanmar has long focused on massive Burmese teak operation, the report warns that economic land concessions represents a rising threat. As of July 2013, Myanmar has awarded 2.1 million hectares (5.2 million acres) of forest land for industrialized agriculture to largely local companies. This is an an area almost three times the amount granted in 2011 and nearly the size of Belize. Such economic land concession have sparked protests and unrest in nearby Cambodia, whose government eventually stopped granting new concessions.

“Over 60 percent of the agricultural concessions (mainly biofuel and rubber) are located in just two regions: Tanintharyi Region and Kachin State—two of the most forested regions in the country,” reads the report. “Data suggests that conversion timber from these agricultural concessions located in forested regions is mostly legal with government approval from both ministries of agriculture and forestry and exported via Yangon.”

Myanmar sits in the Indo-Burma biodiversity hotspot, one of the most species-rich ecosystems on the planet, but also among the most endangered. In fact in 2011, Conservation International (CI) listed the Indo-Burma tropical forests as the world’s most imperiled with only around 5 percent remaining at that time.

Myanmar reopened to the world after its longstanding military junta collapsed in 2011. Democratic reforms allowed the international community to drop sanctions and open new trading with the country. While the recent changes presents ample opportunity for a democratic Myanmar, conservationists also warned the country could soon emulate its Southeast Asian neighbors by rapidly cutting down its forests for foreign markets— in this case especially India and China—and wasting its natural resources.

“The country, on the cusp of democracy, is at an important crossroads. Will it succumb to the short-term gains offered by over-exploitation of its natural resources and go the way of Cambodia, where 50% of the old-growth forests fell to the chainsaw within 10 years of the free elections in 1993?” Ross Piper, an insect expert who helped film BBC’s recent documentary writes. “Or will it choose the road less well travelled, investing in long-term, sustainable development and the protection of its natural landscape for future generations?” 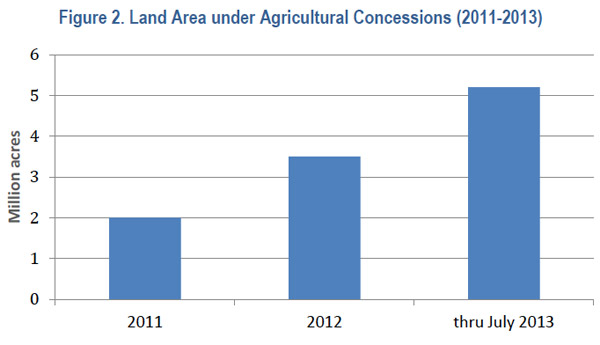 (10/04/2013) For decades, one of Southeast Asia’s largest countries has also been its most mysterious. Now, emerging from years of political and economic isolation, its shift towards democracy means that Myanmar is opening up to the rest of the world. Myanmar forms part of the Indo-Burma biodiversity hotspot, and some of the largest tracts of intact habitat in the hotspot can be found here.

(08/21/2012) As a ‘road junky’, I know what you’re thinking: ‘Burma is reforming so quickly, let’s rush off to Burma before tourists snatch up all its unspoiled beauty!’ I had the same idea, and after an incredible trip to Burma, I have to say that I was right. However, I must tell you that traveling in Burma is both rewarding and challenging. In Burma, I found myself spending a day in Bagan being driven from majestic temple to majestic temple by a betel-chewing, elementary-school-aged, driver who took the horse cart right through a plowed and planted field on the way to Sule Pagoda where I watched the sunset of a lifetime. I found myself in awe of the red-brick stupas, colorful frescoes, pastoral simplicity, and peace found in off-season induced solitude amongst some of the ruins. Still, in spite of these wonderful experiences, I also found that my optimism over the country’s recent transformation was sometimes tempered by evidence of its tumultuous past.