Erik Hoffner is an environmental journalist and photographer whose work has appeared in a wide range of publications, including Orion, The Sun, Northern Woodlands, Yale Environment 360, Earth Island Journal, and World Ark. Recently two of his stories triggered strong reactions from the public: an exposé on damaging logging practices in ultra-green Sweden and a photo feature on suburban fracking in Colorado that spawned an avalanche of reader comments.

In an October interview with Mongabay.com, Hoffner discussed the fallout from these stories as well as his career in environmental journalism.

AN INTERVIEW WITH ERIK HOFFNER

Mongabay: What is your background and what led you to become a journalist/photojournalist?

Erik Hoffner: My family is full of photographers, so inspiration was everywhere, but the writing came later as an add-on to the images I had gotten good at creating. I
started writing on a freelance basis for all sorts of magazines around 2000 and later as a staffer for the iconic print magazine Orion, I had my own column about grassroots activism for a spell which was really fun. That combination of factors got me noticed by an editor for a magazine who sent me to Poland for a sustainable agriculture story.

Mongabay: Where does your work typically appear?

Erik Hoffner: Grist.org, Orion, Yale Environment 360, World Ark, and Earth Island Journal. I’m also a frequent photo contributor for The Sun and am working on an interview for that publication now.

Mongabay: What conservation issues most interest you? What are your favorite subjects for photography?

Erik Hoffner: My coastal upbringing biases me towards marine conservation stories, and a deep reading of my Grist posts since 2006 will make that abundantly clear, but my environmental degree and time living in Colorado and New Mexico widened that a lot. Favorite photo subjects surround people interacting with the physical world, whether that’s the foraging of wild foods or working hard to conserve some part of the world. I want to expose unexpected story lines wherever possible, and show the protagonists in the most devastating light.

Mongabay: Your reporting on logging in Sweden generated quite a bit of attention. What was the impact of that article?

Erik Hoffner: It was a shock to most Swedes to learn that their country is cutting its forest way too fast, especially the old growth. In fact, their own forest agency had reported that the current regime was unsustainable, relying as it does on clear cutting of old growth forests in slow to regenerate boreal forests, but the man on the street in Stockholm or Uppsala was unaware. Swedes hold conservation, and forests in particular, in top regard, so there was a lot of reaction and outrage, but after National Geographic News Watch took note and the story went world wide, a national dialogue began that is still unfolding. This was especially propelled by a top columnist for the country’s biggest newspaper who wrote a five part expose on the issue agreeing with my thesis that the country was greenwashing its forest industry’s products. This is noteworthy because Sweden is regarded as the world’s greenest country, and contains the largest swath of forest and biodiversity in all of Europe within its borders. If Sweden can’t do logging right, who can? 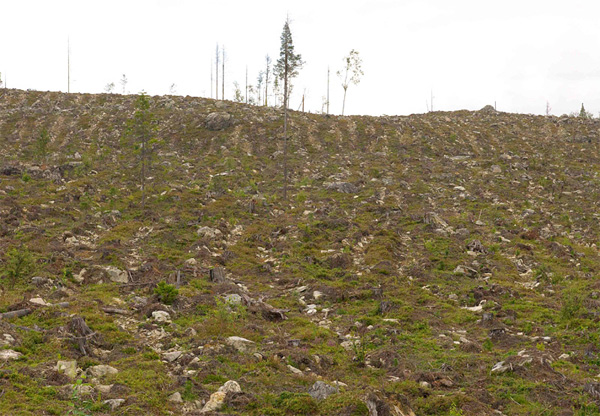 Clearcut forest on a hillside in Sweden. Photo by Erik Hoffner.

Mongabay: Are there any other recent pieces you are particularly proud to have worked on?

Erik Hoffner: The Drill Next Door is a feature I produced for Grist a month ago that garnered huge attention: readers were shocked by the images I created of drill rigs looming over homes and playgrounds in suburban Colorado, where the fracking industry runs rampant, and I received requests and queries from all over the country for interviews and use of the images. Weeks later of course the devastating floods happened and numerous drilling operations were inundated and leaked untold amounts of hydrocarbons and toxins into air and water around these same neighborhoods. 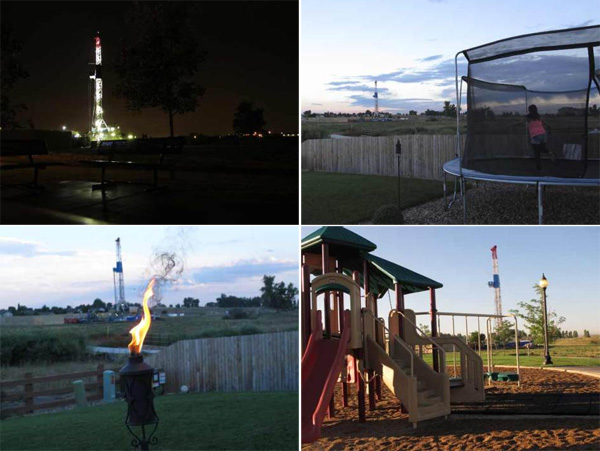 Mongabay: What would you say is the most important thing you’ve learned about environmental writing?

Erik Hoffner: That there are untold numbers of storylines, and personal stories, to be told about environmental issues. Everyone’s got a story to tell and we as documenters just need to listen and help tell them.

Mongabay: What has been the biggest challenge working in environmental journalism?

Erik Hoffner: It’s an extremely under-resourced and largely freelance endeavor: you have to make your own breaks and leverage opportunities that come along. I got
noticed by participating in online forums, but it can be tougher nowadays to make yourself heard. Freelancing is a tough way to go but organizations like Society of Environmental Journalists are key, I’d recommend joining that organization, both for the camaraderie and the mentoring resources it offers.

Erik Hoffner: Get real world experience visiting places or communities you’re passionate about, and write about or photograph them faithfully: outlets like socialdocumentary.net can help you tell that story to a wider audience. Communicate with the media outlets you’d like and want to write for, but start small and work up from there, because a body of work speaks volumes to a busy editor. One of my first paying articles was for Back Home magazine and that gave me the confidence to keep going.