The federal environment minister, Mark Butler, has given the go-ahead to a controversial mine that the courts halted amid concerns it could drastically affect the last stronghold of the Tasmanian devil.

Butler said he had granted approval to Shree Minerals to proceed with its iron ore mine at Nelson Bay River in the north-west of Tasmania, subject to 30 conditions.

However, the Save the Tarkine campaign group, which successfully convinced the federal court to block the mine two weeks ago, said it would launch a further legal challenge, claiming that Butler had not taken the time to make a full assessment of the mine’s impact.

The federal court had ruled that Tony Burke, the previous environment minister, had erred by failing to properly consult departmental advice relating to the mine’s adverse implications for the Tasmanian devil.

Around 80% of the Tasmanian devil population has been ravaged by a facial tumor disease, with the last remaining tumor-free population found in the Tarkine, where the mine is to be located.

Conditions placed on the mine by Butler include a ban on travel to and from the site outside daylight hours to reduce the chance of devils being run over by trucks. Shree employees will also have to get to the mine via a bus, rather than travel there in their own cars.

Shree will have to monitor devil populations and contribute $350,000 to the Save the Tasmanian Devil program. The company will have to pay $48,000 for each devil killed, as well as fund the eradication of feral dogs and cats should a spotted-tailed quoll, another endangered marsupial, die.

Butler has also demanded that Shree put $400,000 towards research into four rare orchids found in the vicinity of the mine.

“I have imposed conditions that I am confident will protect those species,” Butler said.

“These conditions include a range of avoidance and mitigation measures that will reduce the likely impacts. Where significant residual impacts remain likely, however, the company must take other action to compensate for the impacts, known as offsets.

“These conditions will ensure that there are strong environmental protections in place for a development with significant economic potential for north-west Tasmania.”

Scott Jordan, head of the Save the Tarkine group, told Guardian Australia that Butler’s decision was rushed and would be challenged in court.

“They’ve fast-tracked the mine with a window dressing reassessment that contains most of the conditions of the previous approval,” he said. “Today’s decision is a decision in favor of extinction of the Tasmanian devil.”

“The minister has had 10 days where he hasn’t done a reassessment, he’s just got a briefing and met with a bunch of stakeholders not relevant to the decision. The departmental advice is clear that this mine would introduce disease to devils in their last disease-free area in Tasmania.

“It’s a great concern that this advice has been ignored. We’ll be getting our legal team to go through this as this decision doesn’t address the massive failure identified by the federal court.”

The mine has been strongly backed by the state Labor government, the Coalition and resources industry. It’s estimated that the $20m project will employ around 70 people in an area that has struggled, compared with the rest of Australia, to create jobs and stimulate economic growth. 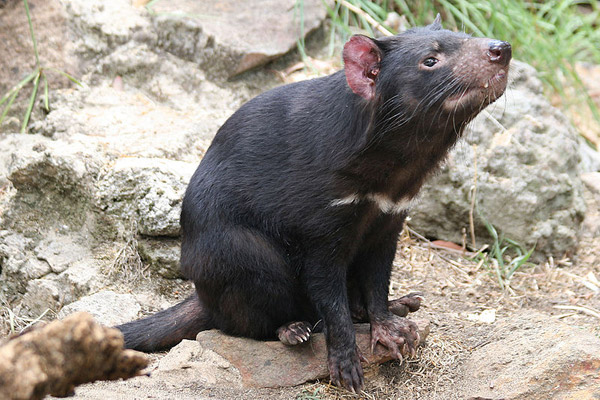 (07/24/2013) Revelations of koalas suffering graphic injuries and death in Victorian timber plantations are evidence of a long-standing failure to properly protect the iconic Australian marsupials, according to a leading conservation organization. Footage on Monday night’s 7.30 report showed koalas, including babies, lying dead on the floor of a cleared forest. One koala was missing an arm while another injured animal relocated to a new area of bush was shown to be in visible distress.

(06/09/2013) Hot pink slugs that emerge after rainy nights have become a conservation symbol for alpine forests on Australia’s Mount Kaputar. The slugs, which measure up to 20 centimeters (8 inches), are only found on Mount Kaputar, a volcano that last erupted 17 million years ago. They spend most of their time buried under leaf litter, but emerge by the hundreds when conditions are right to feed on moss, algae, and fungi.

(06/06/2013) Australia’s leading scientific expert on the endangered Leadbeater’s possum has publicly lambasted the Victorian state government, claiming it is the first ever domestic administration to take “calculated actions” that it knew could wipe out a threatened species. In a letter published in the respected journal Science, Prof David Lindenmayer, of the Australian National University, states that “government-sanctioned legal logging of the reserve system will signiﬁcantly increase the chance of extinction of Leadbeater’s possum.”