Jumbo problems for the Indian railways

Running late that morning, the Kanchankanya Express train zipped past Gulma and entered the Mahananda Wildlife Sanctuary in northern West Bengal, India. Till a few minutes ago, impatience was writ large on every face. Now with the fog having finally lifted and the green forest cover glistening under the sun, things were finally looking up. But before my co-passengers could sigh with relief, the train came to a screeching halt, right in the middle of the forest. I looked out the door of my compartment. A group of passengers had already detrained and gathered by the railway track, speculating what was wrong. “Not to worry”, one of them shouted back to us in Bengali, “The train just hit a grazing cow. We will be on our way soon.” What he perhaps did not say, was that it could easily have been an elephant.

Elephant deaths on this track are a common and cumbersome affair. The Mahananda Wildlife Sanctuary, with its fairly large elephant population, is just one among the many forests the 163 km long Siliguri-Alipurduar railway track cuts through. Others include Chapramari Wildlife Sanctuary famous for its gaur and elephant populations, Jaldapara National Park which harbors a high density of one-horned rhinoceros, Buxa Tiger Reserve and several other protected forests. The forests aside, the track moves through a mosaic of lush green rolling tea gardens against the backdrop of the Himalayas, numerous croplands, villages, towns, and several large and small rivers interweaving through the landscape. With 74 km of the track going through forests, this railway line has been in the media glare for more wrong reasons than right.

This year, so far, eleven elephants have reportedly died due to train accidents on this track. Five elephants in January and a single tusker in March were hit by passenger trains near Buxa Tiger Reserve. The latest incident in May, which claimed the lives of five elephants near Banarhat, bears an uncanny resemblance to a similar accident in 2010 in which seven elephants died around the same place. 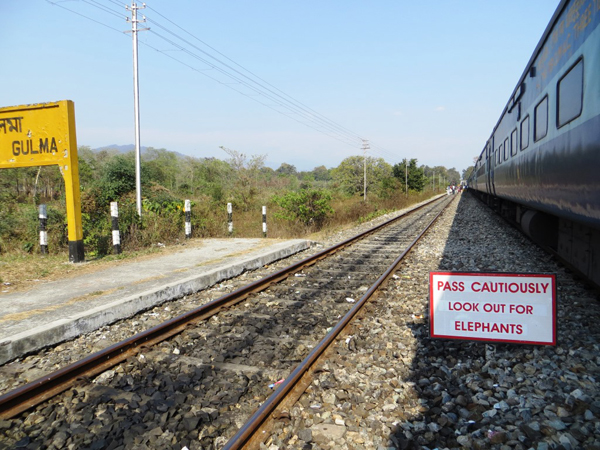 While all of these casualties were due to passenger trains, goods trains here have had their own share of collisions in the past. Over the last 10 years, goods trains have been responsible for over 32% of all casualties, while passenger trains account for 62%. On an average five elephants either die or are injured on this track, a steep rise from the average of one elephant casualty per year prior to 2003, when the track was still meter gauge.

Built by the British in the late 1800s, catering mainly to the ever expanding tea estates in North Bengal, the meter gauge track saw fewer trains plying at slower speeds. Records maintained by the West Bengal Forest Department indicate that even then sections of railway track passing through Mahananda and Chapramari Wildlife Sanctuaries were primary accident sites. With rising demand to improve connectivity in the north-eastern states of India, and the need to lower load on the alternative track connecting New Jalpaiguri-New Alipurduar-New Bongaigaon, the conversion of the track from meter gauge to broad gauge was inevitable. Amidst several protests and a public interest litigation (PIL) filed by WWF, West Bengal, the conversion of track began in 1999 and was completed by 2003.

The number of vulnerable stretches along the track has steadily increased since then. The accidents also appear to have a temporal pattern, with many more occurring at night than during the day. In view of such increasing wildlife related accidents, primarily elephants, a lower speed limit has now been imposed on some stretches. While 17.4 km of the track has a speed limit of 50 km/h throughout the day, 74.6 km of the track faces the same speed restriction between 7pm and 5am. Over the rest of the track, trains ply at a maximum permissible limit of 100 km/h. But does the 50 km/h speed restriction really help? 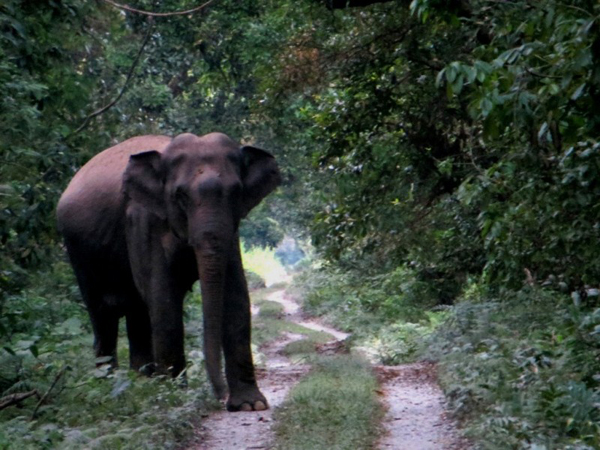 Elephant on the road in Chilapata, North Bengal. Photo by Shreya Dasgupta.

“We need a minimum braking distance to stop the train completely,” says a train loco pilot at the Alipurduar Railway Junction. “If an animal appears unexpectedly on the track, there is very little we can do even at 30 km/h. Braking suddenly would put human lives at risk.”

However, it is not uncommon to see trains whizz through speed restricted sections, instead of slowing down.

While most of the people living along the track attribute these accidents to increased number of trains and their speeds, many add that increased elephant movement outside the forests in search of food is another factor.

“Elephants move out during the harvest seasons of rice and maize,” says a resident of a village nestled between forests of Mahananda Wildlife Sanctuary and Baikunthapur forest division. “During these months, I see them walk past my house every evening.” As a consequence of their long distance movements, elephants end up raiding crops, damaging houses, schools and even injuring people on the way. With various forms of human-elephant interactions on the rise, train accidents only add to the conflict.

In fact, between 2006 and 2011, while 57% elephant deaths in North Bengal were due to natural causes, a significantly high 35% occurred due to train collisions. It is thus, not surprising that elephant-train accidents attract a lot of press coverage. But these large mammals are not alone. Several other wild animals face collision-risk, most conspicuous of which perhaps, is the gaur. A large wild bovine, majority of its accidents have taken place around Chapramari Sanctuary. The casualty list also includes leopard, chital, sambar, fishing cat, and several other smaller animals, many of which, more often than not, go unnoticed and unrecorded. 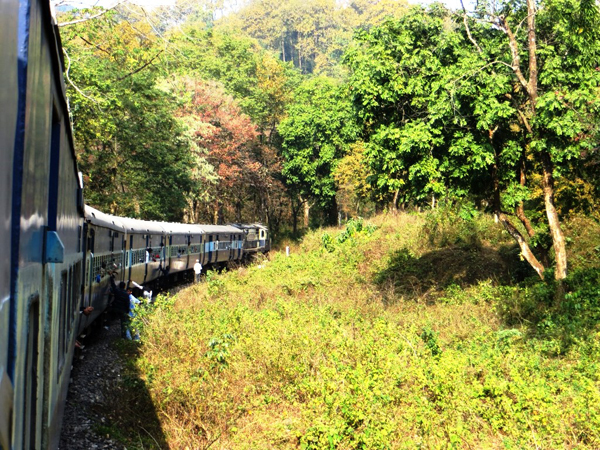 Is there then a way out? A number of PILs have been filed at the Kolkata High Court as well as the Supreme Court of India, demanding that the railways actively take up mitigation measures to prevent train accidents on this railway track and others in India. Another demand has been to shift train traffic from this track to the currently saturated alternative line connecting New Jalpaiguri to New Alipurduar. But this would require careful planning and investment. The North East Frontier Railway (NFR) has also recently taken a big step forward. In a proposal to the Delhi headquarters, the NFR has proposed to stop all trains from plying on this track between 6pm and 6am. If the proposal does get implemented, it could become a major breakthrough in mitigating train-wildlife collisions in this region.

Within these forests amidst the silence, the intermittent honking of trains intertwined with the high pitched call of peafowls, paints a haunting image; that of the constant tussle between the need for development and ecological balance. But for the Indian railways, with its mascot ‘Bholu’ the elephant, this balance seems out of reach for now.