Does size matter? When referring to primate brain size and its relation to social intelligence, scientists at Duke University do not think the answer is a simple yes or no.

In the past, scientists have correlated large brain size to large group size. However, in a new study published in PLoS ONE, scientists at Duke University provide evidence that large social networks, rather than large brains, contribute to social cognition, favoring the evolution of social intelligence.

This is exactly what the authors found.

To test the social intelligence theory, experimenters chose six lemur species as their primary subjects due to their genetic similarity but variance in group size and social habits. Then a team of undergraduate researchers tested 60 individual lemurs from these six species to see if they were more likely to steal food when humans were present.

The experiment consisted of three separate tests. The first involved a pair of human testers, who sat on each side of a block, with one plate of food in front of each of them. One human tester faced the plate that was also facing the entrance where the lemur would emerge from, the other had his or her back turned.

In the second test, human testers sat in profile to the plate of food, facing toward or away from the plate; and in the third test, testers wore a black band either over their eyes or mouth while facing the plate of food.

Under the social intelligence theory, those species from larger groups should be more perceptive to social cues than those species who from smaller groups. In this particular case, the social intelligence theory was correct: the size of the lemur group, in this case, ring-tailed lemurs (Lemus catta), the largest species in the sample, positively correlated with performance. In other words, the ring-tailed lemurs were more effective at stealing food undetected because they were sensitive to social cues and the orientation of the human tester.

In terms of brain size, when the lemurs were studied, scientists found that “relative brain size did not predict performance in the social-cognitive task.” In essence, the size of a lemurs’ brain did not gauge how well they would perform in the social cognitive test.

These findings of lemur social behaviour are the first attempt to experimentally test the hypothesis of intelligence by looking directly at intelligence rather than looking solely at brain size. If the social intelligence theory is correct, it would reveal the potential for cognitive evolution. 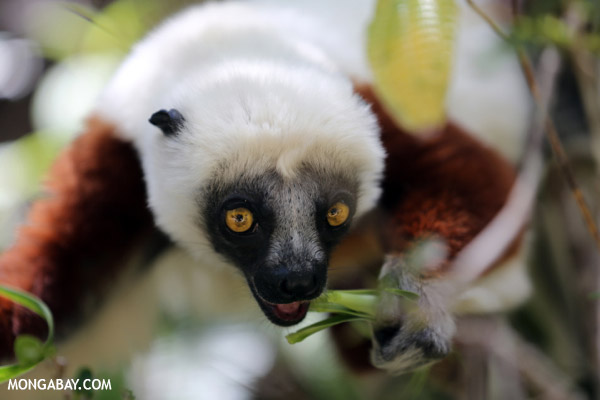 To protect themselves, lemurs learn alarm calls of other species

(07/11/2013) Solitary lemurs in Madagascar rely on the alarm calls of birds and more social lemurs to evade predators, reports a study published in PLoS ONE.

(05/05/2013) An endangered lemur has a larger range than originally believed but is still at risk due to forest fragmentation and land clearing, reports a study published in the journal Primate Conservation.

(05/02/2013) Bears do it, bats do it, and now we know lemurs do it too: hibernate, that is. Since 2005, scientists have known that the western fat-tailed dwarf lemur hibernates, but a new study in Scientific Reports finds that hibernation is more widespread among lemurs than expected. At least two additional lemur species—Crossley’s dwarf lemur and Sibree’s dwarf lemur—have been discovered hibernating. So far lemurs, which are only found on the island of Madagascar, are the only primates known to undergo hibernation, raising curious questions about the relationship between lemur hibernation and more well-known deep sleepers.