Every month I tally the most popular articles on the news section. It should come as no surprise that the most popular articles are usually the ones that have done well on social media. But what I find surprising is the extent to which search engines (almost entirely Google) have declined in terms of referring traffic to news articles. Based on a 12-month moving average, last month was the first time that more traffic to news.mongabay.com came come from social media sources than Google, Bing, and Yahoo. I expect that trend to continue. 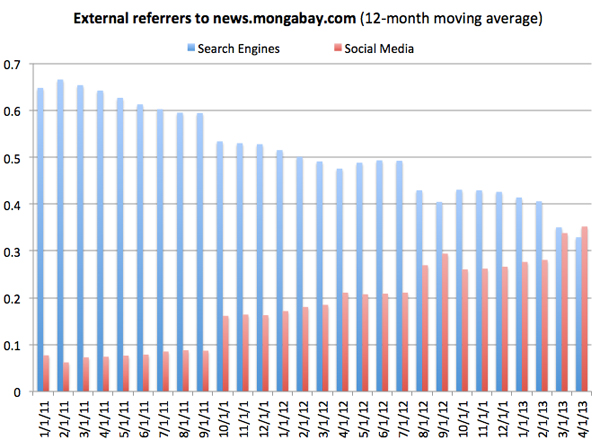 The take away here — which should be obvious to anyone who has used the Internet in the past three years — is that social media is an increasingly important source of traffic. So if you run a web site, care about traffic, and don’t have a social media strategy, it might be time to start thinking about one.

I’d rate Mongabay’s current social media presence as mediocre, which is largely my fault — I’ve focused on content rather than engagement via social platforms. However as our presence improves, I’d expect a greater share of traffic to come from sites like Twitter and Facebook.

I should add that at present, most of our social media effort is aimed at the news section — we’ve done very little with other parts of the site. Sections like rainforests, kids, and travel may be particularly well-suited to platforms like pinterest and tumblr.

If you are just starting out with social media for your web site, I suggest targeting a single platform first. Build up your audience and then move into another platform. Don’t try to start Facebook, Twitter, Tumblr, Pinterest, YouTube, Google Plus, LinkedIn, etc all at the same time. Success with one platform is hard enough — maintaining a half dozen, especially if you are an individual, will likely result in disappointment.

I’ll try to get back to travel-related posts next week.