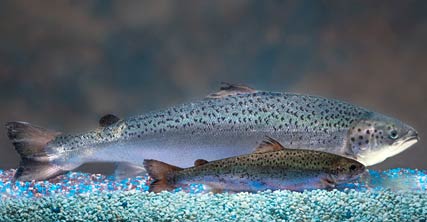 AquaAdvantage GM salmon next to a normal Atlantic salmon

The U.S. Food and Drug Administration (FDA) has partially approved the AquAdvantage Salmon, a genetically engineered salmon that grows twice as fast as normal. The FDA states that the GM salmon is “safe and unlikely to harm the health of the consumers or the environment”.

The AquaAdvantage salmon has been developed by AquaBounty a biotech company based in Waltham, Massachusetts. Their GM salmons have an added growth hormone from the Pacific Chinook salmon and a promoter gene from an ocean pout that allows the fish to produce growth hormone all year long instead of only during the Spring and Summer months. The fish grows to market size in 16 to 18 months rather than three years.

Aquabounty has reassured this salmon is safe for consumption and poses no threat to the environment as they intend to only develop sterile females.

Environmental and advocacy organizations such as Greenpeace, Friends of the Earth or Food and Water Watch oppose what they call the “Frankenfish”. They are concerned that it could cause human allergies and the eventual contamination or decimation of the natural salmon population if it escapes and breeds in the wild.

The Monterey Aquarium revealed that current methods used to produce sterile fish are less than 99% accurate. That would mean that one fish in every hundred would not be sterile and could be reproductively viable. Another concern is that production of GE salmon, even in its early stages, is likely to involve the production, shipping and growing of hundreds of thousands of eggs and fish which could also be accidentally released into the wild.

According to its opponents, the escape of reproductively viable GE salmon into the wild is very likely to occur. If this were to happen, the consequences are very hard to predict.

If the AquaAdvantage salmon is finally approved, it would be the first genetically modified animal approved for food consumption anywhere in the world.

The FDA has opened its report for public comment and will review the situation before making a final decision. The consultation will finalize at the end of February 2013, so now is the time for the public to state any concerns here.