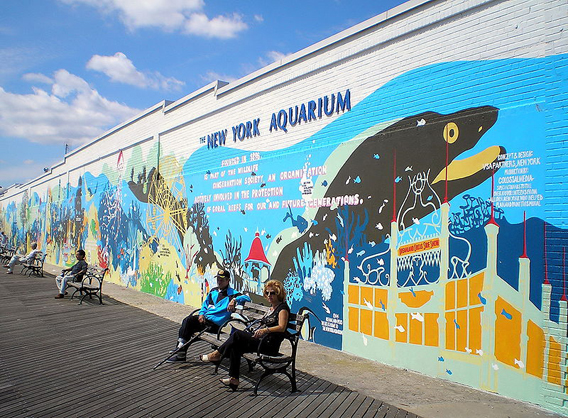 The WCS New York Aquarium sits on the boardwalk of Coney Island. Photo by: David Shankbone.

Hurricane Sandy, which brought storm surges that reportedly reached 14 feet to New York City, has put the Wildlife Conservation Society’s New York Aquarium “under water,” according to a statement from the organization. The aquarium is located on the Coney Island boardwalk, in the heart of an area where rescue operations are currently under way to save people stranded in their homes. There are reports that flooding has reached some people’s roofs.

“The Wildlife Conservation Society’s New York Aquarium, located in an evacuation zone in Coney Island, experienced severe flooding from the storm surge associated with Hurricane Sandy. The entire 14-acre facility was under water,” a statement sent to mongabay.com reads. “As the water recedes, we will need time to assess the full extent of the damage. Our staff remain at the aquarium after working throughout the storm.”

Running since 1896, the WCS aquarium is home to a wide-variety of marine species, including Pacific walrus, black-footed penguins, sand tiger sharks, loggerhead sea turtles, and hundreds of others. The aquarium is planning to open a new addition focusing on sharks in 2015.

While damage at the aquarium is being assessed, the organizations’ other four zoos across New York City “do not appear to have experienced serious damage.” These include the Prospect Park Zoo, the Central Park Zoo, the Bronx Zoo, and the Queens Zoo.

Hurricane Sandy has been called a hundred-year-storm (in some places it may be a 1,000 year storm), however recent research concludes that climate change is likely increasing the occurrence of particularly intense hurricanes. A 2010 review paper in Nature Geoscience stated that global warming may increase the number of particularly intense hurricanes by 2-11 percent. However, scientists continue to debate if climate change is increasing hurricanes in general or just the notably intense ones.

All WCS facilities are closed today due to the storm. Re-opening dates and times will be released later.

(08/09/2012) The National Oceanic and Atmospheric Administration (NOAA) raised its estimate of the number of storms that will likely form during this year’s Atlantic hurricane season.

Powerful hurricanes may be getting stronger due to warmer seas

(09/03/2008) Warming climate is causing the strongest hurricanes to strengthen and more moderate storms to stay the same, claims a new study published in Nature. However the data on which research is based is already facing fierce criticism.