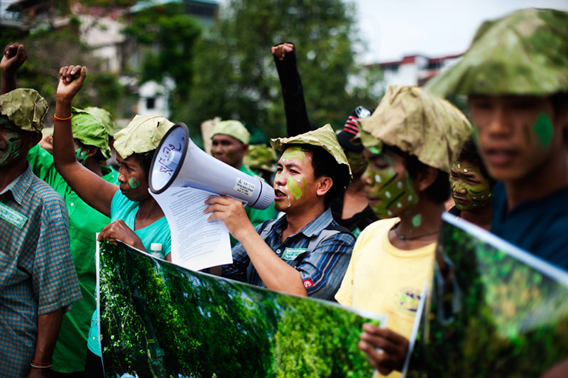 Activists dress as avatars to protest the destruction of Prey Lang forest. Photo courtesy of Prey Lang: It’s Our Forest Too.

Prey Lang forest is home to some 350,000 people, many from the Kuy ethnic group, who depend on its resources for their livelihoods. Most locals have vocally opposed economic land concessions in the region, including by staging protests dressed as ‘Avatars’ from the popular eco-science-fiction film, Avatar. Still even as Prey Lang is spared from new economic land concessions, locals are fighting existing ones.

Prey Lang harbors between 26 and 50 threatened mammals, birds, and reptiles including tigers, Asia elephants, banteng, gaur, and Asiatic black bears. Half of Prey Lang forest has never been logged, making it a rarity for lowland forests in Southeast Asia.

The government is currently mulling a proposal to dub over 600,000 hectares of Prey Lang and adjacent ecosystems as a protected area.

Even before the moratorium on new concessions, the Cambodia Human Rights and Development Organization (Adhoc) found that two million hectares (4.9 million acres) of Cambodia—comprising over 10 percent of the country’s total land area—had been handed over to corporation for logging, mining, agriculture, and other development through economic land concessions.