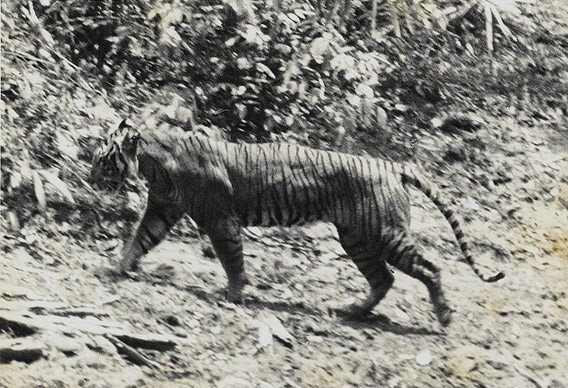 A Javan tiger in 1938 at Ujung Kulon. Photo by: Andries Hoogerwerf.

Although officially declared extinct in 2003, some people believe the Javan tiger (panthera tigris sondaica) is still alive in the island’s Meru Betiri National Park. To prove the big cat has not vanished for good, wildlife officials have installed five camera traps in the park, reports Antara News.

This is not the first time camera traps have been used to attempt to prove the existence of the tiger on Java. Two past camera trap expeditions, both in the 1990s, failed to photograph a single tiger, and the last confirmation of a tiger occurred in 1976. Still, unconfirmed sightings of tigers in the area continue.

“I am optimistic that Javanese tigers still exist at Meru Betiri, although no TNMP officer has seen the animal personally and the trap cameras that we installed several years ago didn’t produce any pictures of the nearly extinct wild animal,” chairman of the park, Bambang Darmadja, told Antara News last month.

Located near the eastern edge of Java, Meru Betiri National Park cover 58,000 hectares, around the size of Zion National Park in Utah.

Recent research has argued that the Javan tiger is in fact a distinct species, and not subspecies as long thought.

Worldwide the tiger is listed as Endangered with just over 3,000 left in the wild. Despite a high profile and decades of conservation work, the species continues to decline from habitat loss, poaching, human-wildlife conflict, and a decline in prey. The Bali and Caspian tigers are two other species that are currently considered extinct both also vanished during the 20th Century.

(12/05/2011) This month’s National Geographic features the work of photographer Steve Winter, who spent months on the trail of one of earth’s most majestic and endangered beasts 𔃐 the tiger. Winter worked extensively in some of tigers’ last strongholds in India, Thailand and Indonesia, capturing rare moments in the daily lives of wild tigers.

(08/14/2011) The Environmental Investigation Agency (EIA) has warned the US, the UK, and all tiger-range nations that China has re-opened the trade in wild cat skins—including tigers—ahead of a Convention on International Trade in Endangered Species (CITES) meeting this week in Geneva, Switzerland. According to the EIA, China has reinitiated a Skin Registration Scheme that allows the trade of big cat skins from legal sources, such as captive-bred cats and controversial tiger farms, however the NGOS argues the scheme lacks transparency, providing an easy cover for the sale of skins taken from big cats poached in the wild.