This article was originally posted as Indonesia’s Ambitious Forest Moratorium Moves Forward on the World Resources Institute’s web site. It has been reposted here with the permission of WRI.

On May 20, 2011, Indonesian President Susilo Bambang Yudhoyono signed a Presidential Instruction (“decree”) putting into effect a two-year moratorium on issuing new permits for use of primary natural forest and peatland.

The highly anticipated moratorium is part of a broader $1 billion Indonesia-Norway partnership to reduce emissions from deforestation and degradation (known as REDD+).

According to government statements, the decree applies to between 64 and 72 million hectares of primary forest and peatland, shown in a map attached to the decree. The decree highlights governance as a key area for improvement, critical in addressing the underlying causes of forest loss. The President calls on ministries and agencies to work together nationally and locally to implement the moratorium.

It is difficult to assess the likely effectiveness of the moratorium in achieving its goal of reduced greenhouse gas (GHG) emissions, since the decree includes a number of exemptions (such as cases in which licenses are pending) without providing details on the exempted areas’ location or size.

In order for the public to fully assess the impact of the decree, the government would need to make all exemptions public in such a way that a quantitative spatial analysis can be independently prepared and published. Only with this information can the various partners in Indonesia’s efforts to reduce GHG emissions see whether the spirit of the decree is being met.

In the meantime, this article provides a summary of how key elements are addressed, identifies unanswered questions to be further explored once the digital maps and additional information are publicly available, and suggests priority actions for the two-year moratorium period that can produce lasting benefits to Indonesia’s forests and the people and businesses that depend on them.

The moratorium makes progress in some key areas…

…but some important issues remain:

What is addressed in the Presidential Decree?

The Presidential Decree gives instructions to specific government agencies regarding a two-year suspension of new permits on areas of primary natural forest and peatland shown in an attached “Indicative Map of New License Suspension” (Indicative Map). 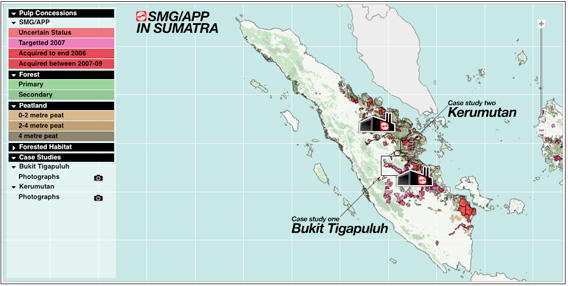 The Presidential Decree addresses key elements in the following ways:

Objectives: Does the preamble clarify the objectives of a temporary suspension of new permits to achieve long term improvements in land use planning and permitting processes

The decree itself states that the objective is to balance economic, social, and cultural development and efforts to reduce greenhouse gas emissions from deforestation and forest degradation. The explicit inclusion of governance is notable and should be applauded, as this starts to get to the root causes of Indonesia’s high rates of forest loss. It will be especially important in the coming months to reach agreement on what specific improvements in governance are needed most and how these improvements can be achieved.

Definitions: Are terms clear and consistent with achieving the stated objectives

The decree does not include definitions of terms. The decree refers to primary natural forest and peatland, but not secondary forest. Large areas of secondary forest, with high carbon content and important biodiversity, will therefore likely not be covered by the decree.

The terms primary natural forest and peatland have not been defined in Indonesian law. In this context they have been interpreted as descriptions of vegetative cover and soil characteristics, as distinct from legal designations. The decree also refers to legal designations such as conservation forest, protected forest, and production forest, which have been previously defined in Indonesia’s 1999 Forestry Law. Media reports suggest there is ongoing confusion regarding whether or not primary natural forest refers to a legal designation.

Data: Are the data and maps that will be used or created to determine the areas impacted by the moratorium accurate and adequate

There is insufficient information on the data and methods used to develop the Indicative Map, and indeed, on who produced it. This map shows peatland and primary forests, yet there are no definitions of these terms. It is also not clear which areas are under which forms of protection, and whether any information on existing or already exempted permits was used to generate the map. Crucially, no information is provided on the extent, location, and status of existing and exempted permits.

A more detailed analysis can be conducted only once the digital maps, source data layers, associated methods, and accurate information on the extent, location, and status of existing and already exempted permits, are made publicly available.

Permits: Which permits are included and excluded from the moratorium?

The moratorium applies to “new permits” (e.g. for the clearing of land to start oil palm, timber or other large estate crops) in the areas specified by the Indicative Map, with a considerable number of notable exemptions, including those for:

No exemptions are provided for the multiple types of use or management rights that can be issued to communities, even though community based forest management and monitoring has been recognized as an effective strategy for achieving sustainable forest management and balancing economic, social, and environmental development goals.

The types of permits which will not be exempted include loan use and business permit use for timber in natural forests issued by Ministry of Forestry, lease rights and use rights issued by the National Land Agency, and recommendations for and location permits issued by Governors and Regents/Mayors. There is no mention of exemptions or inclusion of forest use for mineral or coal mining.

The process for determining the validity of existing forest use permits is unclear. It is also not clear what the implications are for companies that have existing location permits (which are exempted) but not business use permits (called HGU permits). These existing permits may cover millions of hectares (an estimate from Daemeter Consulting is at least three million hectares).

Agencies: Which government agency is responsible for producing the relevant maps associated with the moratorium

Instructions to suspend issuing permits apply to all areas in the Indicative Map. This applies to the Ministry of Forestry, National Land Agency, as well as to all Governors, Regents and Mayors. The Minister of Interior is instructed to coach and supervise Governors and Regents in implementation.

For new permits that are exempted and may still be issued inside the Indicative Map areas, the Minister of Environment is instructed to reduce emissions of the business activities by issuing environmental licenses. It is assumed to mean that these licenses will restrict allowable GHG emissions.

This updating process does not only have consequences on the physical delineation of primary forest and peatlands, it also moves the licensing authority on non-forested lands (other usage areas) to the Ministry of Forestry as stated in Section Four of the decree.

This decree does however involve many of the important ministries and agencies and specifies their role and the need to work together. This is an important step forward in managing lands and forests more efficiently and sustainably. This is also consistent with indicators of ‘good governance’.

Process: What processes will be put in place regarding reviewing permits, cooperation and coordination of government agencies, increasing transparency and participation, making maps and spatial data publicly available, and settling disputes

The decree includes some instructions to agencies regarding improving governance. For example:

The Minister of Forestry is instructed to: (1) improve policies on issuing permits on the use of timber in natural forest areas and (2) improve management of lahan kritis (“critical” or degraded forest) through ecosystem restoration concessions.

The Minister of the Environment is instructed to improve governance of business activities within the areas shown on the Indicative Map through environmental permits.

Multiple agencies are instructed to coordinate the map revision process and provide information to monitor and report to the President on a regular basis.

The Head of the National Spatial Planning Coordinating Agency is instructed to accelerate the consolidation of the Indicative Map into the spatial planning map revision as part of land use governance reform, in cooperation with other agencies. This could ensure that primary forest and peatland that is not already under some form of legal protection is appropriately zoned through the spatial planning process, with the status change lasting beyond the two-year moratorium period.

The decree does not make any specific provisions for reviewing or revoking permits, increasing transparency and participation, or making maps and spatial data publicly available.

The omission of an exemption for community forestry permits—when many exemptions were made including for industrial activities— is a major weakness in the decree.
Addressing Unanswered Questions

An effective moratorium would help to improve land use planning and permitting processes that contribute to Indonesia’s development goals and respect local rights, continuing beyond the two-year suspension period.

The Indonesian government can begin to help answer some of these questions by ensuring that a digital version of the Indicative Map, source data layers, associated methods, and accurate information on the extent, location, and status of existing and already exempted permits, are made publicly available.
What are additional priorities for the two-year moratorium period?

In addition, as acknowledged by the government, achieving these goals will require taking many actions in the two-year moratorium period that are not addressed in the Presidential Decree. This includes putting in place REDD+ policies such as improved land use planning and permitting processes, reviewing or revoking illegal permits, encouraging expansion of agriculture and timber plantations onto degraded land instead of forested land (e.g. sustainable palm oil expansion on degraded land) and developing incentives for existing permits on forested lands to be swapped for permits on degraded lands (e.g. voluntary land swaps).

The main purpose of this decree, as identified in a previous article, is to create time for the government, business and civil society to develop and implement changes that will lead to more sustainable land management while stimulating economic growth, such as:

Whether this Presidential Decree contributes to achieving the goals of the Indonesia-Norway agreement on REDD+ is highly dependent on how remaining unanswered questions are addressed and what additional actions the Indonesian government takes—with the participation of industry and civil society—during the two-year period.