by Morgan Erickson-Davis on 7 January 2011

Leatherback sea turtles undertake one of the longest journeys of any animal as they traverse the oceans in search of food, navigating hazards such as plastic pollution and fishing operations. A new study published in the Royal Society Journal Proceedings B has for the first time mapped their odyssey through the South Atlantic.

Leatherbacks are the largest turtle species in the world, with the record-holding individual found in Wales measuring ten feet in length and weighing more than a ton. Unlike other sea turtles which have bony shells, leatherbacks sport a carapace covered in oily skin. They can swim almost 22 miles per hour, making them the world’s fastest reptile species, and have been recorded diving to depths in excess of 4,000 feet.

Leatherbacks have declined 80 percent since 1980 when there was an estimated global population of 115,000 breeding females. They consist of three genetically distinct populations: Atlantic, Western Pacific,and Eastern Pacific, with the little-studied Indian Ocean leatherbacks perhaps constituting a fourth. Of these, the Malaysian subpopulation of the Eastern Pacific has experienced the greatest decline. Once boasting 10,000 nests, in 2008 only two females came ashore to lay their – infertile – eggs. The Malaysian decline is blamed on human consumption of leatherback eggs.

Another cause for concern is the overwhelming presence of plastics in today’s oceans. Studies estimate that a third of all leatherbacks have ingested plastic which they mistake for jellyfish, their preferred food. The plastic can cause blockages or it can get stuck in their stomach where it can displace actual food, leading to starvation.

But perhaps the most major source of turtle fatalities is entanglement in commercial fishing gear, with a 20-year death toll estimated to be in the millions. As a consequence, many regulated fisheries are shut down for the season if they experience too many accidental catches.

“The reason for doing the project is to understand the turtles’ movements, but the context is that the Pacific population recently went through a huge decline,” Matthew Witt, the study’s lead author, told BBC News.

“Part of the reason for that is interaction with fisheries – so it seemed very pertinent to get a better understanding of what the South Atlantic leatherbacks are up to.”
The Atlantic leatherback population ranges throughout the entire ocean, from the Cape of Good Hope to the North Sea. While turtles in the Pacific and North Atlantic have been previously tracked by scientists, the journey of those in the South Atlantic have until now remained a mystery.

To map their travels, scientists affixed satellite tracking tags to their shells at their nesting grounds in Gabon. The tags revealed three major routes: the first group of turtles remained in tropical Atlantic waters, the second swam southwards down the coast of Africa, and the third group swam all the way to South America. The reason why the turtles choose these routes in unclear, but scientists suspect it has to do with oceanic currents; as hatchlings, leatherbacks are at the mercy of the water and perhaps as adults they simply continue on in the same direction.

This study gives us a really good idea where we should be focusing efforts to reduce bycatch,” Dr Witt told BBC News. “Over the last five or 10 years there’s been quite a lot of research for example on using a different shape of fish hook that cuts the rate of unintentional catch for things like turtles while maintaining the intentional rate of fish catch.

“So I think we now need to push forward and say ‘let’s change all the hooks in these areas’.” 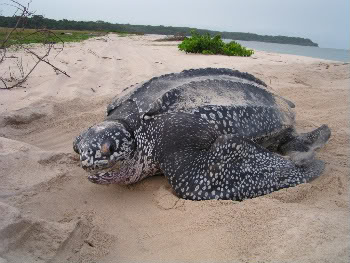 (05/17/2009) Scientists have found the world’s largest population of nesting leatherback sea turtles. On the beaches of Gabon in West Africa land and air surveys estimated the small country’s leatherback population to be between 15,730 and 41,373 individual females. The findings are published in Biological Conservation.