While the US has fallen far behind China and Europe in clean energy power, an announcement by Google today brings hope to green energy backers. Google is putting its considerable name and a lot of cash behind a $5 billion energy transmission line that would link up proposed wind turbines off the US’s East Coast to consumers.

By buying a 37.5 percent stake in the Atlantic Wind Connection project—joined by Marubeni Corp out of Japan and US investment firm Good Energies—Google has pushed the massive plan to build a 350-mile long cable forward. The project will provide the infrastructure needed for off-shore wind projects on the East Coast to be viable. Lack of infrastructure is often a major stepping block in the implementation of wind and other green energies. So far, Google has put down $200 million. 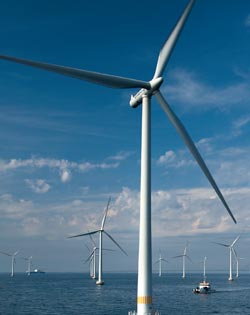 Siemens will be providing the turbines for the Cape Wind project. Image copyright Siemens AG.

The Internet giant said that the project will be a “clean energy superhighway”, which will provide thousands of new jobs to the region.

When finished the cable will have the capacity to bring 6 gigawatts of electricity to the East Coast, enough to power nearly 2 million homes. Earlier this year, the Obama administration approved the country’s first off-shore wind project known as Cape Wind, which will place 130 turbines off the coast of Massachusetts.

This is not Google’s first foray in to clean energy, the company is also financing on-shore wind, solar, and geothermal projects.

(10/11/2010) Using decades-old data researchers have proven a long-suspected effect of wind turbines: under certain conditions large-scale wind farms can change local weather. Temperatures recorded from a wind farm in San Gorgonio, California in 1989 shows that turbines cooled local temperatures during the day, but warmed them at night. However, researchers in the paper published in the Proceedings of the National Academy of Science say that the impact of wind farms on local temperatures will not be the same everywhere.

(04/28/2010) The Obama Administration has approved the nation’s first offshore wind farm after more than eight years of legal challenges, reports the Associated Press.

China leaves US (and Europe) in the dust on renewable energy

(02/01/2010) This year China has become the world’s largest manufacturer of solar panels and wind turbines, doubling its wind capacity since 2005. The economically booming nation—and the world’s most populous—has also invested heavily in nuclear power and the world’s most efficient coal plants, according to the New York Times.