The Critically Endangered South China Tiger Roars Again in 2010, the Chinese Year of the Tiger

Today marks the Chinese New Year for 2010, and the start of the traditional “Year of the Tiger.” The people of China might be celebrating future Years of the Tigers without their native and critically endangered South China Tiger (Panthera tigris amoyensis) if not for the efforts of Save China’s Tigers (SCT), a grassroots conservation effort headed by the charismatic Li Quan and her husband Stuart Bray. Both Ms. Quan and Mr. Bray are former senior executives in international business circles. After leaving the corporate world, Ms Quan and Mr. Bray are now stepping up as champions for China’s natural environment, much of which has been lost in the Chinese march towards “The Four Modernizations.”

This article is an interview with Li Quan, founder of Save China’s Tigers. After having enjoyed business success, Ms Quan and her husband decided to give back by helping the Chinese people restore some of their lost natural and cultural heritage. 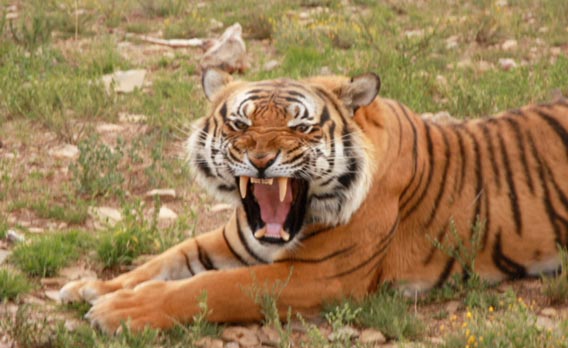 AN INTERVIEW WITH LI QUAN

Mongabay: Ms. Quan, tell our readers about your background and why you came to work with the South China Tiger.

Li Quan: After the opportunity to study abroad for an MBA at the Wharton Business School of the University of Pennsylvania, I worked for seven years in the fashion industry, and my last position was head of Worldwide Licensing for Gucci International in Florence, Italy. Then I moved to London to be with Stuart (whom I met at Wharton) and started pursuing my other interests. In 1998, we went on safari in Zambia and South Africa which led to my understanding of wildlife conservation.

I have always had a love for nature; it’s where I have drawn inspiration and strength. When I was in high school in China, I wanted to go to Inner Mongolia after graduation. There is a folk poem: “The Sky is blue, the Wilderness is vast; when the wind blows, the grass bows to reveal cattle and sheep.” I dreamed of running in the wilderness on horseback in the vast Mongolian steppes with animals everywhere.

Although I was not involved in conservation growing up (China had no concept of conservation at that time), I had a passion for animals, especially tigers and other big cats. It was during safari in Africa, when I realized how the leopard, lion, and cheetah had created a whole tourist industry, which in turn gave locals incentives to protect wildlife. I started dreaming how the tiger could do the same in China. I told myself: “if they had accomplished this in Africa, we can do the same in China. One day, I would introduce what I saw in Africa and create a Chinese Tiger Conservation Model.”

Today, I find myself back in the Laohu Valley Reserve of South Africa, where we are rewilding the South China Tigers; instead of domestic animals on the steppes of Mongolia there are wild antelope everywhere. Here the South China Tigers in our program have grown up, learned hunting, and raised their babies successfully. It is a heaven for me and a dream that I hope to share someday with the people of China. I see wildlife reserves in China with developments based on principles of Africa’s reserves. It would combine the unique Chinese wildlife resources with the South China Tiger as the umbrella species to attract tourist dollars. This money will then be funneled back into the reserve and help community development and other wildlife conservation plans. The project will help China’s reserves increase biodiversity, versus the current “single species protection programs.” The South China Tiger will finally rejoin nature and become the “Lord of a Hundred Beasts” again, thereby safeguarding the entire eco-system. Working with wildlife as a treasured, valuable resource (not an obstacle to progress) will help make conservation sustainable long term, and allow wildlife to co-exist with China’s “human footprint.”

Mongabay: What makes the South China Tiger unique? Tell our readers about the history of the species.

Li Quan: Tigers have long been an intrinsic part of China with the first tigers originating in China two million years ago. The South China Tiger or Chinese Tiger is regarded by scientists as the “stem” or ancestor race of tigers. Among the nine subspecies, the structure of the Chinese Tiger’s head is the most similar to those of the earliest fossil records. The Chinese tiger used to live in the North and middle plains of China, reaching all the way West to Qinling Mountain Range. There believed to be 40000 tigers in China at the beginning of 20th Century, most of them South China Tigers. Due to war, chaos, and habitat destruction, that number dropped to 4000 by 1950. When the “New China” was established, the South China tigers suffered another setback as they were eliminated as “vermin” along with other predators (there is still of course such elimination of predators going on across the Globe, even in the vicinity of our South African reserve where we currently have a little orphan caracal whose mother was poisoned by local farmers). But when the activity of “tiger elimination” was organized in China in the 1950s and ’60s, it became very effective – since the late 1980’s there have been no expert sightings of Chinese Tigers in the wild despite reported traces/sightings by locals. There are now approximately 80 South China Tigers in captivity, all descending from just six wild tigers caught in the 1950s and 60s. 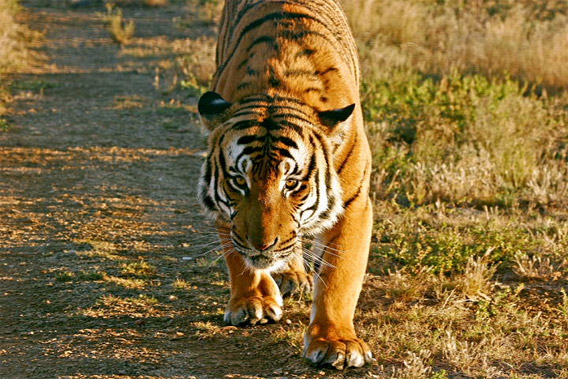 Mongabay: What work has your group done with the South China Tiger to date?

Li Quan: In October 2000, we established the charitable foundation Save China’s Tigers in UK and subsequently in the US and Hong Kong. Our goal was to engineer a Chinese Tiger Conservation Model based on the successful wildlife conservation and eco-tourism models in South Africa. We acquired 33,000 hectares of land in South Africa as a platform for our Chinese Tiger Rewilding Program. We aim to restore cultural heritage and habitat in China, using the Chinese Tiger as flagship and ensure wildlife conservation becomes long-term sustainable. Our slogan is “Tiger Spirit, Tiger Culture and Tiger Eco-systems.”

In 2003, we set up an operational team in South Africa (SA) with some of that country’s top wildlife managers, conservationists and scientists. One of the first Chinese Tigers sent to South Africa in 2003 for the historical “rewilding” (word coined by our strategist Gus Van Dyk-former Carnivore Manager at Pilansburg National Park) training is named “Cathay” after Cathay Pacific who sponsored the transportation. In 2004, another two cubs “TigerWoods” and “Madonna” left a Chinese zoo for our Laohu Valley Reserve in South Africa. By 2006, rewilding was proving successful as Cathay, TigerWoods and Madonna all became proficient hunters, able to survive (unassisted) on their own.

We have also searched China for Chinese Tiger Pilot Reserve Sites for eventual reintroduction of the rewilded South China tigers born in our South African preserve. Two sites in Jiangxi and Hunan provinces were selected by our SA expert team in conjunction with Chinese government scientists. On the public awareness front, we launched the Jackie Chan Tiger Face Awareness Campaign in Hong Kong in 2006 with the generous help of this film star.

Our tigers are stepping up to do their part as well. In 2007, Cathay gave birth to Hulooo, the first South China Tiger cub born outside of China and one of the few cubs born in the past few years. It was an important milestone not only for Save China’s Tigers’ ambitious undertaking but for the entire species. Now, five healthy second generation South China tigers have been living self-reliantly at Laohu Valley Reserve in South Africa, including two cubs from Tigress Madonna who coached them into excellent hunters. 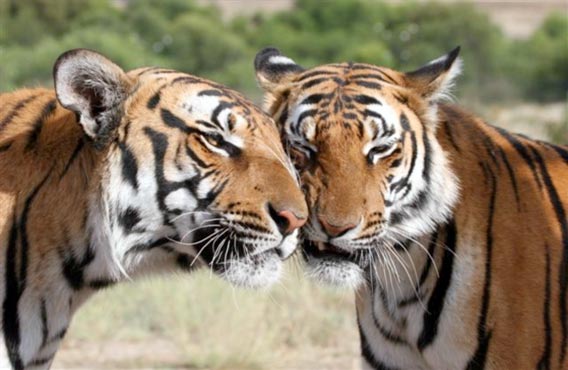 ‘Be Mine’: Just in Time for Valentines (and for the survival of the species), TigerWoods and Cathay

Mongabay: Tell our readers about the process of rewilding training. Considering the obvious cost and expense why not focus more on intensive captive breeding efforts for this critically endangered species?

Li Quan: Cats have an innate hunting instinct which lies dormant if this skill is not developed when the animals are young. Anyone who owns domestic cats will testify “as soon as cats see something moving they go after it.” However, if cats have not learned to “make the kill” they will merely play with the catch. What we do in our program is to wake up the full hunting instinct by letting our tigers understand that “their catch is their food.” The rewilding training process we use is called “Adaptive Management”. Essentially, we create an environment for the tiger cubs along the lines of “learning from their mother in nature.” In the wild, the mother tigress would bring back small prey items for her cubs to practice hunting, slowly moving to bigger game (that are harder to catch) as the cubs grow older. We mimic that environmental training.

Traditional “intensive breeding” of the South China Tigers has failed in Chinese zoos. Like a caged prisoner, the South China Tigers refuse to mate, or when they do mate they won’t get pregnant, and when they get pregnant their cubs were often found with physical defects. Our experiment proves that when the tigers are happy, healthy, and living a wild life, they have no problem in producing healthy cubs. Even a male “327” (studbook registration number showing he is pure-bred South China tigers) who came to SA from a Chinese Zoo when he was 4.5 years old ( who was scared of the tigresses initially and in whom we lost hope of him becoming a dad!) managed to sire an offspring after he became unattached to his concrete cage and lived in totally natural environment for two years. Therefore Rewilding is conducive to successful breeding and we feel that the two are inseparable. Whereas we are going from success to success, Chinese zoos once again plunged into deep troubles with their breeding programs – two of the three cubs born in Suzhou Zoo in December died.

Mongabay: What are your plans for SCT during 2010, the Chinese Year of the Tiger?

Li Quan: We will of course continue with our positive results and have fingers crossed that both females will give birth in April – May.
In addition, we are launching an awareness campaign titled the “Last South China Tiger”, created by New Orleans body painting artist Craig Tracy who kindly donated his work to Save China’s Tigers. These stunning images and video are spreading around the net and you can see both the still images and the video on our website.

(A short version of the video can also be downloaded on our website and sent to your friends by email or mobile phone!) Giclee painting of “the Last South China Tiger” is also on sale in our E-shop. We have also created a Tiger Tram Campaign in HK. Please see our website for the cool images of the “prowling Tiger Tram.”

And our book “South China Tiger Diaries” was published by the People’s Literature Press, in the Chinese Language. This beautifully designed book chronicles the lives of five South China Tigers and their cubs as they learned to hunt and fend for themselves at Laohu Valley Reserve in South Africa. It described their challenges and setbacks, their love and romance, the births of their cubs, and their survival training in a fun, entertaining, and humorous format. The book is on sale in major bookstores across China.

Mongabay: Where would you like to see the South China Tiger by 2022, the next Chinese Year of the Tiger?

Li Quan: I would like to see their numbers continue to increase and their roars heard again in the grasslands and mountains of China.