Earthquakes can move faster than previously thought with rupture rates well exceeding the conventional 3 kilometeres per second, reports Oxford University professor Shamita Das writing in the journal Science. The finding suggests that earthquakes in the world’s largest quake zones may be capable of more destruction than earlier projections.

Using more computer modeling, improved seismograms and new imaging techniques, Das showed that rupture rates during a 2001 earthquake in Tibet may have been as fast as 6 kilometers per second along some straight portions of the strike-slip fault — more than twice the conventionally held “speed limit” for quakes. 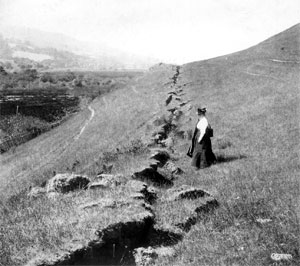 “The Tibet earthquake suggests that long, straight strike-slip faults are necessary for ruptures to propagate at supershear speeds. Reexamination of earlier reports of supershear rupture also show that such speeds generally occur on the straight section of faults although not all straight portions of faults
reach supershear speeds,” writes Das. “Fracture mechanics studies show that long, straight faults are more likely to reach the high rupture speeds. The faults start from rest, accelerate to the maximum permissible speed, and continue at this speed provided there are no obstacles along the way and fault friction is low.”

Das suggests that the highly destructive 1906 San Francisco earthquake along the San Andreas Fault may have also ruptured faster than was previously believed, increasing its destructiveness.

Das says the results could help seismologists locate the world’s most dangerous faults and better predict what areas are most at risk of damage from earthquakes.

“We need to apply the same analysis to other great strike-slip faults around the world, such as the more than 10,000-km-long Himalayan-Alpine seismic belt” she writes. “We also need to develop a measure of the “straightness” of faults and the length of the straight portion required for such fast rupture speeds.”