by Max Planck Institute For Meteorology on 1 October 2005 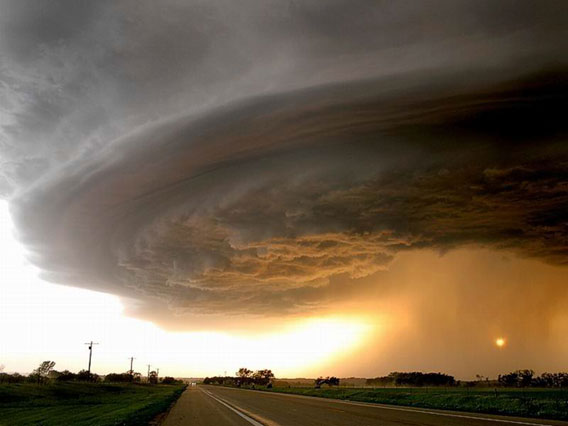 According to the calculations of scientists at the Max Planck Institute for Meteorology in Hamburg, over the next century the climate will change more quickly than it ever has in the recent history of the earth. These results come from the latest climate model calculations from the German High Performance Computing Centre for Climate and Earth System Research.

The global temperature could rise by up to four degrees by the end of the century. Because of this warming, the sea level could rise on average by as many as 30 centimeters. The scientists expect that under certain conditions, the sea ice in the arctic will completely melt. In Europe, summers will be drier and warmer, and this will affect agriculture. The winters will become warmer and wetter. Another consequence of the heated atmosphere will be extreme events like heavy precipitation with floods.

“The significant result of these future scenarios is the progressive raising of mean global temperatures and the movement of climate zones in connection with that,” says Dr. Erich Roeckner, the project leader of the model calculations in Hamburg. “Almost everywhere on earth, the forestry industry will have to husband different types of trees than it has until now.”

Rising carbon dioxide levels could devastate marine food chain – 29-September-2005
Rising carbon dioxide in the atmosphere could make oceans to acidic for marine organisms producing protective shells according to research published in the journal Nature. Such a development could be catastrophic for the ocean’s food chain and devastating for world fisheries.

Decline of Arctic sea ice increases – 29-September-2005
For the fourth consecutive year, NSIDC and NASA scientists using satellite data have tracked a stunning reduction in arctic sea ice at the end of the northern summer. The persistence of near-record low extents leads the group to conclude that Arctic sea ice is likely on an accelerating, long-term decline.

Capturing and storing the carbon dioxide could be key in minimizing climate change – 26-September-2005
A new assessment report finalized here today by the Intergovernmental Panel on Climate Change (IPCC) concludes that capturing and storing the carbon dioxide (CO2) produced by power plants and factories before it enters the atmosphere could play a major role in minimizing climate change.

Summers in arctic getting longer and hotter – 23-September-2005
In a paper that shows dramatic summer warming in arctic Alaska, scientists synthesized a decade of field data from Alaska showing summer warming is occurring primarily on land, where a longer snow-free season has contributed more strongly to atmospheric heating than have changes in vegetation.

The kind of devastation seen on the Gulf Coast from Hurricane Katrina may be a small taste of what is to come if emissions of the greenhouse gas carbon dioxide (CO2 ) are not diminished soon, warns Dr. Ken Caldeira of the Carnegie Institution’s Department of Global Ecology in his opening remarks at the 7th International Carbon Dioxide Conference in Boulder, Colorado, September 26, 2005.

Humans impacted climate thousands of years ago September 9, 2005
New research suggests humans were influencing the world’s climate long before the Industrial Revolution. Atmospheric levels of methane, a potent greenhouse gas, climbed steadily during the first millennium due to massive fires set by humans clearing land for agriculture. The research, published in this week’s Science, is detailed below in three presss releases from sponsoring institutions.

Global warming will cause gasses trapped beneath the ocean floor to release into the atmosphere according to research presented at the Annual Conference of the Royal Geographical Society. The impact could initiate a catastrophic global greenhouse effect.

A dramatic rise in carbon dioxide 250 million years ago may have caused global temperatures to soar and result in Earth’s greatest mass extinction, according to a study published in the September issue of Geology. Global warming, which may have produced temperatures 10 to 30 degrees Celsius higher than today, would have had a significant impact both on oceans, where about 95% of lifeforms became extinct, and on land, where almost 75% of species died out.

In addition to the findings about the complex interplay between atmosphere and ocean, the current climate models from the Max Planck Institute for Meteorology also include new findings about the effects of aerosols and the influence of the earth’s carbon cycle. The results confirm speculations over recent years that humans are having a large and unprecedented influence on the climate and are fuelling global warming.

To verify their own climate model calculations, the researchers first simulated the climate of the last century and compared the results with the real climate. “In this way, the theoretical models could be adapted very well to reality,” says Professor Jochem Marotzke, the Managing Director of the Max Planck Institute for Meteorology.

The results by the climate researchers from Hamburg will be presented in the report from the IPCC, the Intergovernmental Panel on Climate Change. It is developed every five years, on the commission of the WMO, World Meteorological Organisation, and the UNEP, United Nations Environmental Programme. The IPCC report is provided to governments as an independent source of information. In total, 1000 scientists worldwide are working on the fourth edition of the progress report, due for release in 2007. The scientists are commissioned by their governments to participate in the comprehensive, independent climate status report.

“The Max Planck Institute for Meteorology is participating in the calculation of the IPCC scenarios with a coupled atmosphere-ocean model that is considered one of the best climate models worldwide,” says Dr Guy Brasseur, the Director of the Max Planck Institute for Meteorology, and one of the 15 coordinating main authors of the IPCC Report. “As scientists, we want to provide politicians with a decision paper that is as understandable as possible, and from which they can decide which measures ought to be politically implemented as urgently as possible.”

In the framework of the international workshop “Future Climate Scenarios and their Use for Impact Studies”, scientists from the Max Planck Institute for Meteorology presented, on September 29th and 30th, their latest model calculations, and discussed them with colleagues and operators from Germany and abroad. The data and results will be made available, in particular, to research groups that deal with the effects of climate. Those include regional results and the effects on land and sea ecosystems, hydrology, air quality, and socio-economic systems.

This is an adapted press release from the Max Planck Institute for Meteorology.