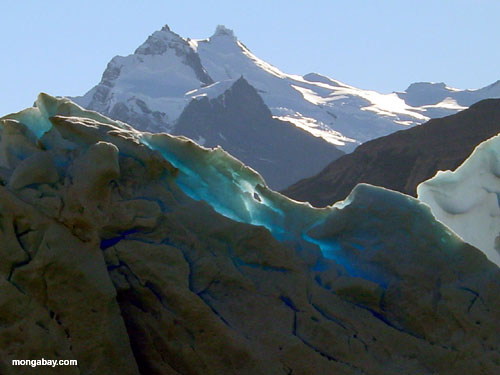 Arctic Ocean Could Be Ice-Free in Summer Within 100 Years, Scientists Say

The current warming trends in the Arctic may shove the Arctic system into a seasonally ice-free state not seen for more than one million years, according to a new report. The melting is accelerating, and a team of researchers were unable to identify any natural processes that might slow the de-icing of the Arctic.

Such substantial additional melting of Arctic glaciers and ice sheets will raise sea level worldwide, flooding the coastal areas where many of the world’s people live.

Melting sea ice has already resulted in dramatic impacts for the indigenous people and animals in the Arctic, which includes parts of Alaska, Canada, Russia, Siberia, Scandinavia and Greenland.

“What really makes the Arctic different from the rest of the non-polar world is the permanent ice in the ground, in the ocean and on land,” said lead author University of Arizona geoscientist Jonathan T. Overpeck. “We see all of that ice melting already, and we envision that it will melt back much more dramatically in the future as we move towards this more permanent ice-free state.”

The report by Overpeck and his colleagues is published in the Aug. 23 Eos, the weekly newspaper of the American Geophysical Union. A complete list of authors and their affiliations is at the end of this release.

The report is the result of weeklong meeting of a team of interdisciplinary scientists who examined how the Arctic environment and climate interact and how that system would respond as global temperatures rise. The workshop was organized by the NSF Arctic System Science Committee, which is chaired by Overpeck. The National Science Foundation funded the meeting.

The past climates in the Arctic include glacial periods, where sea ice coverage expanded and ice sheets extended into Northern America and Europe, and warmer interglacial periods during which the ice retreats, as it has during the past 10,000 years.

By studying natural data loggers such as ice cores and marine sediments, scientists have a good idea what the “natural envelope” for Arctic climate variations has been for the past million years, Overpeck said.

The team of scientists synthesized what is currently known about the Arctic and defined key components that make up the current system. The scientists identified how the components interact, including feedback loops that involve multiple parts of the system.

“In the past, researchers have tended to look at individual components of the Arctic,” said Overpeck. “What we did for the first time is really look at how all of those components work together.”

The team concluded that there were two major amplifying feedbacks in the Arctic system involving the interplay between sea and land ice, ocean circulation in the North Atlantic, and the amounts of precipitation and evaporation in the system.

Such feedback loops accelerate changes in the system, Overpeck said. For example, the white surface of sea ice reflects radiation from the sun. However, as sea ice melts, more solar radiation is absorbed by the dark ocean, which heats up and results in yet more sea ice melting.

While the scientists identified one feedback loop that could slow the changes, they did not see any natural mechanism that could stop the dramatic loss of ice.

“I think probably the biggest surprise of the meeting was that no one could envision any interaction between the components that would act naturally to stop the trajectory to the new system,” Overpeck said. He added that the group investigated several possible braking mechanisms that had been previously suggested.

In addition to sea and land ice melting, Overpeck warned that permafrost—the permanently frozen layer of soil that underlies much of the Arctic—will melt and eventually disappear in some areas. Such thawing could release additional greenhouse gases stored in the permafrost for thousands of years, which would amplify human-induced climate change.

Overpeck said humans could step on the brakes by reducing carbon dioxide emissions. “The trouble is we don’t really know where the threshold is beyond which these changes are inevitable and dangerous,” Overpeck said. “Therefore it is really important that we try hard, and as soon as we can, to dramatically reduce such emissions.”

This is an University of Arizona release release.