The Ministry of Environment of Madagascar has issued a ban on logging permits in areas that threaten the sustainability of forests. The ban covers as much as 7.0 million hectares and comes a year after Malagasy President Marc Ravelomanana made a commitment to triple the protected surface area to six million hectares, or 10 percent of the national forests.

Madagascar, one of the world’s most biodiverse countries with more than 70% of its species endemic to the island, lost about 12 million ha of forest between 1960 and 2000 (about half its forest cover). Most of this loss results from subsistence agriculture, namely slash-and-burn agriculture known locally as tavy although logging contributes to deforestation in some of the country’s eastern rainforests 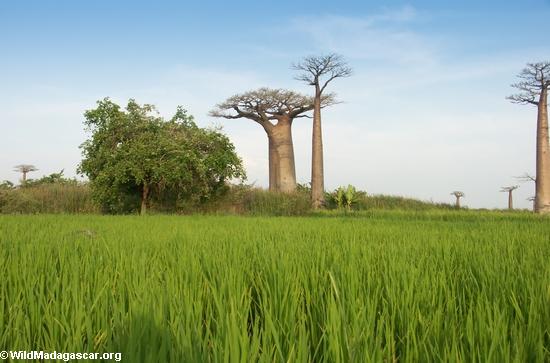 Baobabs among rice paddies in Madagascar

Madagascar is also one of the world’s poorest countries with an average per capita income of $260. About 70 percent of its population living below the poverty line while nearly half of its children under five years of age malnourished. The country is emerging from a serious political crisis in 2002, which saw two rival presidents set up their own governments and resulted in a 12 percent decline in GDP and increased poverty and unemployment. Despite its rocky start, Madagascar’s new government has made considerable progress improving the economy and establishing foreign business relationships. In March 2005, Madagascar became the first recipient of aid under the new Millennium Challenge Account, a program that gives grants to countries that are committed to respecting the rule of law and reducing corruption.