In Indonesia, pulp and paper firms stoke demand that may drive deforestation

JAKARTA — Plans for expansion by the pulp and paper industry in Indonesia threaten to reverse a declining rate of deforestation for pulpwood plantations, according to a NGO analysis.

An increasing number of producers and buyers of wood pulp and paper have adopted zero-deforestation commitments in recent years. This has contributed to a drop in forest-clearing for the industry in Indonesia, according to analysis of data from Trase, a supply chain transparency initiative.

Trase’s new Indonesia wood pulp supply chain map can now track pulp exports back to the specific plantations that contributed most of the pulpwood. It shows the average deforestation rate from 2017-2019 fell by 85% compared to the three-year average for 2010-2012. 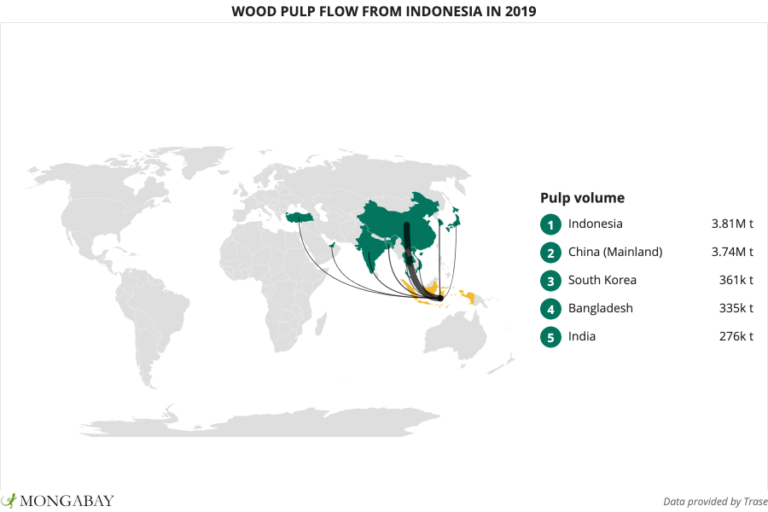 But this decline might not last long, given that at least six new pulp mills have recently started operating, according to data from the Ministry of Industry, which points to an increase in demand for pulpwood and thus for new plantations to feed them. Two of the mills are already running at full capacity, three are slated to max out this year, and the sixth will ramp up to 85% capacity this year. Their combined output at full capacity will be 1 million tons of pulp per year. In 2019, Indonesia’s total pulp production was 9 million tons, according to data from Trase.

There’s also a plan by China’s largest pulp company, Nine Dragons Paper, to expand into Indonesia with a $1 billion investment, according to Indonesia’s Ministry of Industry, with a view to producing 6 million tons of pulp a year.

The group said nothing is set in stone yet.

Nine Dragons Paper obtains certification from Forest Stewardship Council (FSC), but it’s unclear if the group has a zero deforestation policy or not, according to the Global Canopy’s “Forest 500”.

“It’s time to stop the construction of new mills,” said Timer Manurung, director of the environmental NGO Auriga. He said the industry had embarked on a spree of building new mills without considering where the wood to supply them would come from, and was as a result undermining its own sustainability pledges.

“Where will they get their raw material from? They will [eventually have to] get it from the cutting down of natural forests. And as a result, their products won’t be accepted by the market,” Timer said.

Christopher Barr, executive director of the NGO Woods & Wayside International, agreed that the industry’s expansion raised concerns about its sustainability.

“Indonesian producers have built some of the world’s largest pulp mills, and these multi-billion dollar facilities place enormous pressures on the landscapes in which they are situated,” he said.

He cited in particular the clearing of carbon-rich peatland forests to develop pulpwood plantations, a practice that over decades has degraded this unique ecosystem and render it extremely flammable. The near-annual burning of these dried-out peatlands sends clouds of choking haze across Borneo and Sumatra, and into neighboring Southeast Asian countries. Peat fires have also contributed to Indonesia becoming one of the biggest greenhouse gas emitters in the world. The burning season of 2015 released nearly 16 million metric tons of carbon dioxide a day, more than the daily emissions of all economic activity in the U.S.

“Producers’ heavy reliance on peatlands for wood supply is a key driver of catastrophic fire risk, especially as climate change is creating longer and more frequent droughts,” Barr said. “As the industry has expanded, this reliance on peatlands has locked in the sector’s sizeable carbon footprint for the long term.”

With much of the forests in Sumatra and Borneo cleared for pulpwood, palm oil and mines, the anticipated expansion of the pulpwood industry would likely be in the relatively pristine forests of Indonesia’s easternmost region, Papua.

Last year, the region accounted for 3.4 million hectares (8.4 million acres) of areas designated by the government for selective logging and pulpwood cultivation, or 40% of the national total. That’s up from 4.9 million hectares (12.1 million acres), or 28% of the total, in 2017, and shows a disturbing pattern, said Mufthi Fathul Barri, a researcher with the NGO Forest Watch Indonesia (FWI).

“It means that it’s getting more obvious that the expansion of selective logging and industrial forest plantations is moving east, especially into Papua,” he said.

Timer said the trend is alarming because it looks like the government is preparing Papua to be the new forest-clearing frontier.

“It is as if the lands in Papua are vacant in the minds of people in Jakarta, even though Indigenous peoples own these lands,” he said. “I don’t know why the Ministry of Environment and Forestry has proposed forest areas in Papua [for selective logging and pulpwood plantations]. This will surely drive deforestation.”

Timer said that while the government has rolled out various policies to curb deforestation — including moratoriums on clearing primary and peat forests and on licensing new oil palm plantations — there are still loopholes that leave vast swaths of natural forest unprotected.

He cited the case of Merauke, the southernmost district in Papua, whose lush forests blanket a mostly flat terrain. That means most of the district doesn’t qualify for protected-forest status, which applies to forest landscapes on a gradient.

“We protect landscapes if they are steep and there’s a risk of landslides,” Timer said. “That’s the parameter of protected forests. The steeper they are, the more eligible they are for protection.

“Merauke is flat as far as the eye can see,” he added. “This makes it seemingly OK for us to establish industrial plantations there.”

The forest-clearing moratorium, meanwhile, doesn’t extend to secondary forests, which, in the case of Merauke, can be virtually pristine and harbor rich biodiversity, but have traces of human activity.

Timer said the lack of meaningful distinctions showed the need to issue a blanket moratorium on clearing of all natural forests in Indonesia.

“We will send a letter to the president to ask for this protection,” he said, “whether it’s inside forest areas or outside, inside concessions or outside.”

Edy Sutopo, the industry ministry’s plantations director, played down concerns that the expansion of the pulpwood industry would lead to greater deforestation. He said the government is focusing on increasing the output of existing plantations rather than expanding their size.

“For the pulp industry, what we do is research with the aim to increase productivity,” he said.

Although both have pledged to refrain from any further clearance of peatlands, and to stop buying raw materials from other companies clearing peat, Trase data show both conglomerates continue to source from plantations established on drained peat. To date, neither company has committed to phasing out its existing plantations on peatlands.

Asia Pulp and Paper and APRIL, the pulp and paper arms of Sinar Mas and Royal Golden Eagle respectively, said they only operated on peatlands that have been licensed and designated for cultivation by the government.

APRIL said it has “a legal obligation to manage those concessions for commercial use” and does so “in the most responsible way possible.” APRIL said it’s striving to achieve net zero emissions from its land use activities by 2030, in line with its sustainability goals, called APRIL2030.

Both companies cited their peat restoration initiatives as evidence of their commitments to manage peatlands in a sustainable manner, with APP saying “any existing plantations located on peat dome peaks will be retired and restored once their current cycle is completed.”

Besides future retirement and restoration plans, APP said it’s been restoring degraded peat in protected areas within the company and its suppliers’ concessions.

APRIL touted its commitment to conserve and restore a fifth more peatland than it operates on, as well as its program to restore 150,693 hectares (372,371 acres) of peat forest on Riau’s Kampar Peninsula.

Robert Heilmayr, an assistant professor of environmental and ecological economics at the University of California, Santa Barbara, however, said this continued reliance on peatlands means the pulpwood industry remains unsustainable even as its deforestation rate continues to decline.

Past deforestation also contributes to the unsustainability of the sector, since today’s Indonesian pulp exports include a great deal of wood fiber grown on plantations established during the most recent boom of pulpwood-driven deforestation from 2004-2012, the Trase data show.

“Although the sector has made significant progress towards reducing deforestation, pulp exports maintain a large environmental footprint due to past clearing and continued production on drained peatlands,” Heilmayr said.

Timer said it’s important for the government to put an end to the pulpwood industry’s operations on peatlands.

“Don’t let there to be new clearing of peatlands. And [think about] how to phase out from industrial plantations on peatlands,” he said. “If there’s still a push for expansion [of the industry], it will make Indonesia collapse.”

Correction 3/23/2021: The article has been revised to attribute the data of six new mills to the Ministry of Industry.

Banner image: Excavator working in an acacia plantation in Riau, Indonesia. Image by Rhett A. Butler/Mongabay.