Casualty of peace? Study shows rise in deforestation after conflicts

by Dilrukshi Handunnetti on 2 July 2019

The advent of peace in four countries with long experiences of deadly armed conflict hasn’t been kind to the environment, with a new study showing greater rates of deforestation during peacetime than during the years of war.

The paper, published in the journal Land Use Policy, shows how Sri Lanka, Nepal, Peru and Ivory Coast experienced “alarming forest loss” in the years immediately after the end of their respective civil conflicts, based on analysis of forest-cover data gathered through remote-sensing methods.

“Rates of deforestation in war zones show a dramatic increase once peace is declared, and except for Nepal, it is significantly high for the other three countries we studied,” Nelson Grima, a co-author of the paper and postdoctoral associate at the University of Vermont’s Rubenstein School of Environment and Natural Resources, told Mongabay:

The nature and duration of the conflict in each country differed, from two brief civil wars fought between 2002 and 2011 in Ivory Coast, driven by xenophobia and political change; to the quarter-century insurgency in Sri Lanka for an ethnic Tamil enclave in the country’s north. In Nepal and Peru, communist uprisings ran for 10 and 30 years respectively. (A lower-intensity insurgency continues to simmer in Peru.)

What the four countries do share, however, is a dire loss of forest cover. The average rate of deforestation in the five years after the end of the respective conflicts was 68 percent higher than in the last five years of the conflicts, according to the study. The data, based on analysis of Landsat satellite imagery, gave the global average rate of increase in deforestation as 7.2 percent.

“We don’t want people to think we support armed violence in any way. But our findings show that when the fighting stops, a number of factors lead to an increased rate of deforestation,” Simron Singh,  co-author and researcher at the University of Waterloo, Canada, said in a statement.

During times of war, the researchers say, forests are used as cover for guerrilla fighting and secluded bases. As such, they become danger zones where few people are likely to enter if they’re not involved in fighting. That also often means these forests are less likely to be logged or hunted in.

That changes once the fighting has ended and the forests are no longer seen as danger zones.

“When the fighting stops, often reconstruction efforts demand resources, and forests offer ample material and opportunity to help rebuild an economy and society. There is often political instability and weak policy implementation, allowing uncontrolled exploitation,” the researchers said in the statement.

The researchers say the negative effects are derived from a mixture of reduction or suspension of conservation activities due to security concerns and diversion of international aid resources to peacekeeping. But they also note positive effects such as release of pressure on ecosystems and on natural resources due to settlement changes, creation of buffer zones, and reduction or suppression of certain economic activities.

For Sri Lanka, which boasts the highest biodiversity density in Asia and high endemism, the post-war forest-cover loss has been dramatic.

The tropical island paradise experienced a bloody war between 1983 and 2009 that pitted government forces against the Liberation Tigers of Tamil Eelam (LTTE), a separatist guerilla organization fighting for a distinct Tamil homeland in the island’s north and east. The conflict killed more than 100,000 people, according to U.N. estimates.

The war ended with the defeat of the LTTE. In the years that followed, the rate of deforestation, while irregular across time, shot up. In the five years after the end of the conflict, it was up 31.5 percent compared to the previous five years. The fallout since then is apparent, the study says.

“At local level, the most notorious impacts identified by the communities were increase of floods and droughts that lowered water quality and damaged towns and cities, increase of erosion and landslides, and drier climate at local and regional level,” it says.

“Although strategic management plans were prepared, organizations in charge of implementation did not follow the recommendations,” Grima said. “Additionally, an influx of people coming back to the forested areas after the conflict resulted in unplanned development and settlement. Although there were policy changes, those changes did not aim to address the reality of the post-conflict scenario, resulting in the changes not being effective mainly due to implementation deviating from the plans, and politically motivated land grab.”

Grima said the satellite data for Sri Lanka were gathered without regional divides, making it difficult to understand whether resettlement initiatives may have driven the rate of deforestation in the island’s former war zones. 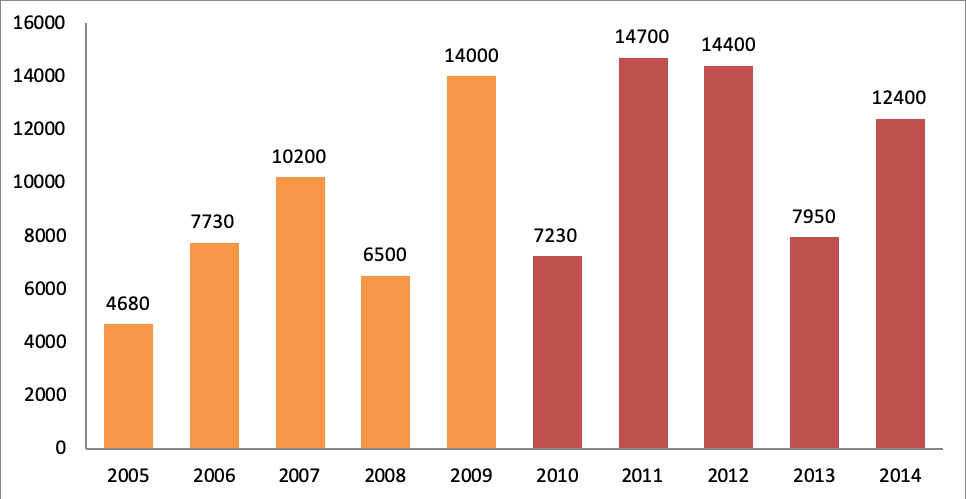 The real issues for all surveyed countries are similar: “Corruption at different scales, lack of funding for the entities in charge of forest and environmental management, inadequate policies and their poor implementation,” Grima said.

The researchers don’t say whether the insurgent groups had greater control over forest areas during the conflicts, as was the case with the LTTE, which held authority over forest resources in the areas under its control. “Such observations were not possible through this study,” Grima said.

When compared, the deforestation patterns in the two South Asian nations, Sri Lanka and Nepal, were different, he said. “In Nepal, the spike was not as high as in Sri Lanka. But there were similarities in the problems experienced: higher levels of erosion, flooding, landslides and other natural disasters post-war, due to increased deforestation.”

While the research provides novel insights into the relationship between armed conflict, forest loss and ecosystem provision, it also reveals that the duration of an armed conflict has no real influence on the rate of deforestation.

For example, Peru’s conflict has been running for more than 30 years, with the rate of deforestation in the five years after the end of major fighting in 2011 up 58 percent from the five years before. Ivory Coast marked nine years between the start of the first civil war in 2002 and the end of the second brief one, but the five-year post-war deforestation rate was 81.9 percent higher than in the last five years of conflict.

The two South Asian countries showed similar increases in deforestation rate — 32.8 percent in Nepal and 31.5 percent in Sri Lanka — although the respective duration of the conflicts was 10 years and 26 years.

For all four countries surveyed, Grima said, “the way forward is decentralized collaborative ideas based on bottom-up approaches. A promising example is the concept of co-management,” to get around the limitations of central government authorities to design and implement forestry and environmental practices during the transition and post-war period.

“By giving the responsibility of power to those stakeholders who use the forests, approaches such as co-management, based on decentralizing power and bringing governance and decision making at regional or local scale, may help deal with issues related to management of forests and other common goods,” the paper says.

Singh and Grima said there are potential solutions to minimizing the negative consequences brought by the unstable transition periods following the end of conflicts.

“It might just be a matter of choice and political will to establish frameworks that will help the recovery process of war-torn areas by supporting ecosystem services provision,” the study says, “which in turn could reduce the probability of the area becoming a focus of future socio-economic conflicts.”

Banner image of a NASA satellite view of Sri Lanka revealing sparser areas of forest in the north and east of the island, by Jacques Descloitres, MODIS Land Rapid Response Team, NASA/GSFC via Wikimedia Commons.