One of the most popular tourist destinations in East Africa is Kenya’s Maasai Mara,. The Maasai Mara, a tract of savanna, is famous for its abundant wildlife, especially large populations of wildebeest and zebra. But its popularity has taken a toll: throngs of tourist buses now surround lion kills and some of the more charismatic and better-known animals. Instant communications have hastened the transition of the Maasai Mara into the Disneyland of safaris. That aside, it is still possible to escape the masses in the Maasai Mara. The park has less-touristy areas, and several private reserves are now located nearby.

However my priority for this leg of this 2007 trip was not the savanna of the Mara, but the Loita Hills, which contain one of the largest surviving tracts of montane rainforest in Kenya. Like the Mara, the Loita Hills are full of wildlife and people with rich cultural traditions.

I was traveling with Terry Light, the owner AFEX, an operator that sets up remote field camps for agencies working in and around conflict zone and refugee camps in East Africa. AFEX also had a small, high-end tourism business focused on wildlife safaris, which is why I had the connection. My mother, the travel agent specializing in high-end foreign travel, had worked with AFEX for decades.

In the 1970s, Terry Light’s brother set up a luxury tented camp in the Loita Hills that catered to small groups of birdwatchers. Its isolation made access difficult at times, but also ensured it would not be overrun like the Mara.

After Terry’s brother died and business slowed in the aftermath of the 1998 U.S. Embassy bombing in Nairobi, interest in the camp dried up. But AFEX continued to pay local community members to watch over the site and run a reforestation project that provided timber for the fence posts that protect local villages from wildlife. Such posts are a significant reason for encroachment into forest areas in the Loita Hills. 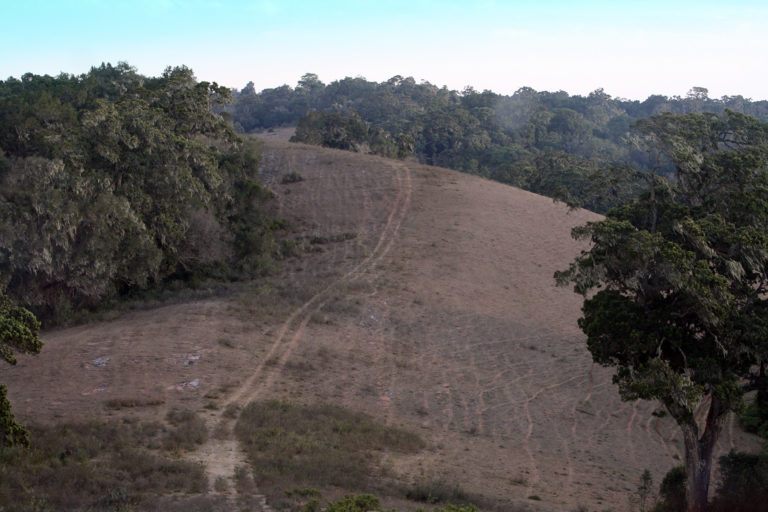 Driving past villages to the camp, it was clear that AFEX’s largesse in keeping the camp running despite a lack of tourists had made Terry a popular man. Children would chase the car near every village and adult men would come out to greet Terry.

The camp was run by local people, who maintained the grounds remarkably well. The first night we heard about some of the uniquely local challenges of maintaining the camp, including prowling lions moving through it, and threats from warring tribes.

The main reason for Terry’s visit was to show me the site and see whether there was potential to reopen the camp for low-volume tourism. So the next day we would go for a hike in the forest.

Accompanying us were three Purko tribesmen, including two former poachers, and our driver, George Onyango, a Luo originally from near Lake Victoria. The Purko were now guards for the camp, but they were also respected men in their community for their great knowledge of local plants and their uses. Accordingly, part of the plan for the day was to collect samples of various plants to create a local guide of medicinal flora that could be distributed to communities to ensure the knowledge lived on beyond the current generation of elders. Terry had produced similar guides before in other places he worked. We also hoped to gain insight into the condition of the forest. Did it contain wildlife or had poaching wiped out the animals?

It quickly became apparent that the forest was home to a lot of buffalo and elephants. The signs of elephants were particularly strong: piles of dung seemingly everywhere and a heavily impacted forest. Many trees had been knocked over, thinning the canopy and leading to great piles and walls of vines, reducing visibility.

The three Purko tribesmen were accustomed to walking these forests and were therefore armed with traditional weapons rather than guns, which were illegal at the time. Each carried a spear, a rungu (a traditional baton), and a short sword. I didn’t stop to think whether these would help us in the face of a charging buffalo or elephant.

Besides the dung and the tangles in places, the forest was beautiful. There were intermittent shallow lakes that supported an abundance of birdlife and revealed the diversity of mammal life in the form of footprints on its muddy shores: zebra, warthog, antelope, lion, buffalo and elephant.

We walked for several hours. We had a couple of tense encounters with water buffalo; the Purko would tell us to wait, then raise their spears, poised to throw, before advancing into the bush. The suspense was incredible — sometimes we could smell the buffalo and hear them breathing. They would bolt once they became aware of our presence.

Africa is one of the few places where there remains an abundance of animals that can cause grievous bodily harm. Among these, buffalo are the most dangerous, accounting for more deaths than any other land animal. In the water, hippos are the biggest killer, but not for reasons you might think: hippo accidents usually involve drowning rather than chomping. Crocodiles, on the other hand, do eat people.

Around midday we were on our way back to the camp, stomachs growling and ready for a hearty meal. All of a sudden the two Purko in front stopped us and said something in the local language, which Terry translated: “Elephants.”

The Purko seemed nervous, which in turn made me nervous. After all, these men had killed dozens of elephants in their previous lives as poachers.

Our visibility was obstructed by a wall of vines, but the warriors raised their spears and stepped quietly forward.

The next moments seemed to occur in slow motion. A twig broke. A Lady Ross’s turaco, a magnificent purple bird with a prominent red crest, took flight. Then the wall of vines in front of us parted and three elephants charged through.

The adrenaline kicked in. With no chance of stopping the elephants at such close range it was every man for himself.

There are few things that get your heart racing like a charging wild animal. While wildlife biologists may be used to the thrill, for me it is terrifying. The unpredictability of it makes it very real.

Elephants move very quickly, easily outpacing a human. They are also very dangerous, especially when they are with their young.

Having been charged by an elephant once before, in Gabon, I had some idea of what to do: find a sizable tree and get behind it. But there was a problem: this part of the forest had no big trees, just shrubs, scrawny trees, and piles of vines that an elephant running at full speed would easily bulldoze.

So I ran. Terry was right next to me along with one of the Purko. We zigged and we zagged, looking for trees and hoping that the elephant was less nimble and that it would run past us.

The old joke about how to escape a bear — just outrun everyone else — didn’t apply here. The elephant was faster than us.

We tried our best to be elusive, and thankfully the elephants ran past us after a few hundred yards.

We stopped to collect ourselves and assess the damage. The three of us were fine, though we’d dropped a few things in the dash. What about the others?

Hearts still racing, we began to retrace our steps. Then we heard something horrible — a sound I will never forget: blood-curdling human screams, shouts and trumpeting. All at once.

We started to run toward the noise. One of the Purko charged out of the bush.

“The elephant got George. He’s dead.”

Before the words could settle in, two more elephants charged through another wall of vegetation just feet away.

We were off again, blindly racing through the jungle looking for refuge. All I need is a tree, I thought.

After what was probably a couple hundred yards but seemed much longer, the marauding elephants veered off in separate directions.

Now there were two questions in my mind. Were more elephants coming? Is George really dead?

Cautiously I looked for the others. Everyone was shaken but OK. Our top priority was finding George

We searched. With dread, I envisioned finding his body first.

But our calls weren’t answered. We kept looking.

We found things we’d lost on the way: sunglasses, a jacket, a camera lens cap, but no George.

Then, a response. George wasn’t dead.

Feeble at first, but then growing in strength, was George’s voice. He burst into the clearing.

He looked terrible: bloodied, muddied and covered in debris, with bits of leaves and dirt in his hair. But he was alive. We ran over to hug him.

George was very lucky — he escaped with only superficial injuries. Initial inspection revealed tusk wounds through his bicep and to his torso.

George explained what had transpired. Two elephants came after him and another Purko. Like us, they ran, but were outpaced by the elephants. With an elephant bearing down on him, George jumped into one of the mounds of vines. The elephant came down on him, stomping and using his tusks. But George grabbed the tusks and did his best to guide them away from his vital parts. Meanwhile, the stomping on his legs was damped by mud and vegetation, which absorbed the crushing weight.

George eventually screamed at the elephant, which triggered the trumpeting response and may have saved George’s life.

George was slow but able to walk with the help of a stick. In the hike back to the camp, we had two more encounters with elephants but in both cases we were able to detect them before any charge took place. Each time my heart rate exploded, but George stood tall and defiant. He would later say that he felt invincible after his brush with death.

When we reached camp, Terry gave George medical attention. We all then collapsed in our tents, exhausted. Evading elephants takes a lot out of a person.

That night we discussed the incident. By this time George was considerably more bruised and sore, but the Purko had had time to reflect. As poachers in their previous life they had had many experiences with elephants and other animals in the forest. They said the day’s event was one of the most aggressive outbursts they had experienced in the forest. One of the scariest, they added.

They thought the elephants may have come from outside the forest area originally, perhaps displaced by agricultural expansion. The elephants may have seen their habitat cleared and converted for a crop like corn, which is commonly grown in the area. Returning to feed on the corn, the elephants would have been attacked by villagers defending their crop. Pushed into the forest already dense with elephants, the herd may have faced hardship. When we surprised them due to low visibility, a downwind approach and a stroke of bad luck, the pachyderms attacked, only knowing humans as a threat.

Human-wildlife conflict is not unique to Africa. It occurs nearly everywhere humans live in close proximity to wildlife. It may manifest as snow leopards killing sheep in Mongolia, tigers mauling illegal loggers encroaching on protected forests in Sumatra, jaguars eating cattle in the Brazilian Pantanal, or wolves taking down livestock in Wyoming. In almost every case, however, it we humans who are trespassing on their territories.