PARIS: As the UN climate summit entered its final critical 48 hours of negotiations, US Secretary of State John Kerry spoke to a packed press conference, promising an unprecedented agreement. Some 186 countries, he said, will agree to voluntarily reduce their carbon emissions to hold rising temperatures to a maximum rise of 2 degree Celsius (3.6 degrees Fahrenheit) below pre-industrial levels.

“We can accomplish so much more in the next few days, the next few hours,” Kerry declared. “The decisions are tough, the debates are complex. But we all know the situation. We won’t leave Paris without an agreement. And we all know what an effective agreement looks like. It needs to be as ambitious as possible.”

To that end, a possible surprise decision is fast taking shape on the conference floor: A steady drumbeat of momentum is building in negotiations this week toward a more aggressive global warming target.

A new catchphrase has emerged in one press briefing after another: “1.5 to stay alive.”

“1.5 degrees is vital to stay alive,” said Samantha Smith with WWF International in a briefing Tuesday. “That should be the long-term goal.”

Many scientists and activists now believe that the goal of a 2 degrees C cap, set at past conferences, may not be sufficient to prevent potentially dangerous climate change impacts.

A group of 20 countries which call themselves the Climate Vulnerable Forum — think Pacific and Indian Ocean islands: the Seycelles, Maldives, and Marshall islands — are making the most noise for language in the final text to hold global warming to a 1.5 degree C rise instead of 2 degrees C (that’s 2.7 degrees F rather than 3.6 degrees F). The forum is chaired by the president of the Philippines, which has been hit by three of the strongest typhoons in its history in the past three years.

The web site tcktcktck.org spells out the difference in a mere half-degree Celsius, differences that are quite significant: 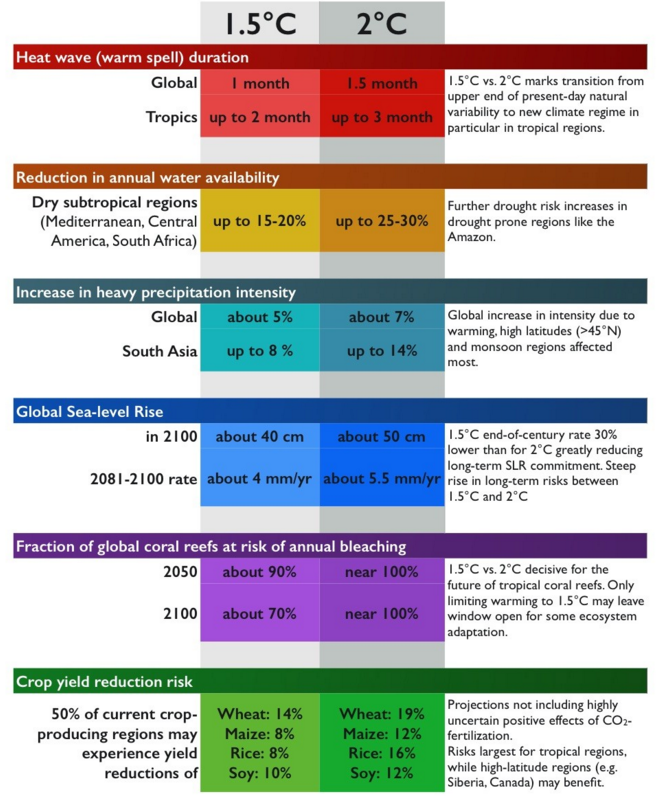 “You want to solve the problem? Expressing 1.5 degrees C as the target will have the effect of doing what’s necessary to solve the problem. Warming of 2 degrees C just isn’t going to be enough to prevent massive climate change disruption over the next 50-80 years,” said John Knox, the UN’s Special Rappateaur on the issue of human rights obligations relating to the enjoyment of a safe, clean, healthy and sustainable environment.

Few will predict as of now where the final language will land.

There’s just one problem with the new target, said Alden Meyer of the Union of Concerned Scientists. If the world could somehow magically stop burning fossil fuels tomorrow, the temperature rise already built into the Earth’s climate system by existing greenhouse gases will lead to at least another 1.3-degree C (2.34 F) rise by 2100. Since putting a sudden brake on all carbon emissions is impossible, a target of 1.5 degree C may simply be unrealistic, Meyer said.

However, the new goal does have far more than symbolic value, especially as the world begins to move forward to assure a stabilization of the global climate. The planet has already seen a 1 degree C (1.8 degree F) rise in temperatures since pre-industrial times, as carbon levels in the atmosphere rose from roughly 270 parts per million (ppm) to our current roughly 400 ppm — with sobering and frightening impacts worldwide. The only safe way forward is to quickly step back from such high carbon levels.

“If humanity wishes to preserve a planet similar to that on which civilization developed and to which life on Earth is adapted, paleoclimate evidence and ongoing climate change suggest that CO2 will need to be reduced from [current levels] to at most 350 ppm,” concludes retired NASA climatologist Dr. James Hansen.

And the only way to achieve that goal is to immediately transition the global economy away from fossil fuels and into renewable energy, energy efficiency, and sustainable farming and forestry practices, says environmental NGO 350.org.
The world awaits the final agreement of the COP21 negotiators.

Justin Catanoso is director of journalism at Wake Forest University in North Carolina. His reporting is sponsored by the Pulitzer Center on Crisis Reporting in Washington, D.C., and the Center for Energy, Environment and Sustainability at Wake Forest.