‘Act before it is too late’: scientists urge ban on salamander imports to avert pandemic

Amphibian experts recommend an immediate ban on salamander imports to the U.S. to prevent the spread of a deadly salamander fungus that is wreaking havoc on European salamanders. In an article published today in the journal Science, the authors warn that without this ban the pathogen represents a major biodiversity threat.

Two years ago, European scientists observed that a highly virulent fungus, Batrachochytrium salamandrivorans (Bsal), was causing mass die-offs in European salamanders. They hypothesized that Bsal was introduced to native salamanders through the trade of Asian salamanders as pets, with continued Bsal spread throughout Northern Europe. Scientists worry this fungus could be boarding ships bound for the U.S., hitching a ride on salamanders destined for people’s homes.

North America is a biodiversity hotspot for salamanders, with 48 percent of the world’s 676 salamander species. In the U.S., salamanders are predicted to be particularly vulnerable to Bsal in the southern Appalachians, California coast and the Sierra Nevada. In Mexico, mountainous regions near Mexico City are at particular risk of infection.

For Professor Vance Vredenburg, the study’s primary investigator, it is déjà vu. Bsal is closely related to a frog fungus, Batrachochytrium dendrobatidis (Bd). The most devastating infectious wildlife disease on record, Bd has led to extinctions and near extinctions of more than 200 amphibian species worldwide, according to the authors.  Vredenburg was at ground zero during the Bd outbreak in the Sierra Nevada a decade ago: “never in all my life have I seen such a terrible sight. Bodies of dead frogs scattered by the tens of thousands across the most beautiful and apparently pristine landscape you’ve ever seen”. 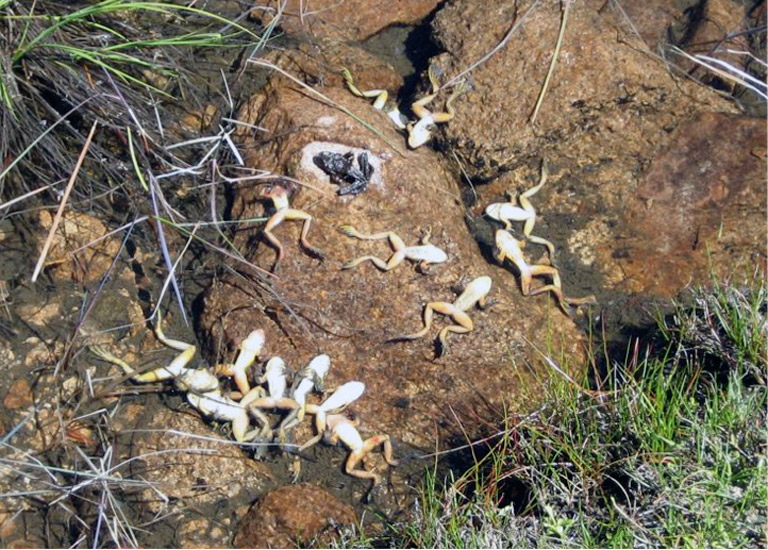 Similar to the Bsal outbreak, it is thought that trade of the African clawed frog was a major pathway for the introduction of Bd. Professor Vredenburg hopes to prevent a similar fate for salamanders.

“Unlike when we first figured out what was going on with Bd, we now know that a single pathogen can damage all these different species,” Vredenburg said. “So with Bsal, we actually have an opportunity to act before it is too late: imagine equipping the Titanic with radar.”

In their Science article, Vredenburg and co-authors analyze the past five years of salamander trade data and find that 98 percent of pet salamanders in the U.S. originate from Asia. They estimate that more than than 760,000 Asian salamanders entered North America via ports in Los Angeles, Tampa, New York, Atlanta and San Francisco. Three of the most common species of pet salamander are suspected Bsal carriers, including the Chuxiong fire-bellied newt (Cynops cyanurus), the Japanese fire-bellied newt (C. pyrrhogaster) and the Tam Dao or Vietnamese salamander (Paramesotriton deloustali).

Since the original outbreak, Professor Vredenburg has worked on a number of promising treatments for California frogs. One such treatment involves the bacteria Janthinobacterium lividuma that, when spread on frog skin, helped many Sierra Nevadan frogs survive Bd. Scientists are scrambling to come up with similar treatments for Bsal.

However, according to Vredenburg, the better solution would be to stop the spread of Bsal before it starts. In this, Vredenburg is optimistic: “We can do this!”

Header image: Cynops pyrrhogaster, one of three common pet salamanders that serve as a reservoir for Bsal. Photo by Mark Aartse-Tuyn.