How technology is helping save rainforests

Yesterday I gave a talk at Cisco Systems in San Jose on “How Technology is Helping Save Rainforests”. Here’s a brief recap.

After giving background on Mongabay, I provided a broad overview of global trends in tropical deforestation, including changing drivers of forest loss. The most significant trend is a shift from poverty-driven to profit-driven deforestation as market-driven commodity production and trade (for increasingly urban consumption) have replaced subsistence agriculture as the dominant driver of deforestation worldwide.

I explained why this is happening — urbanization, changing government priorities, and globalization/trade — before explaining five major implications of the shift:

For the rest of my talk I focused on the top two points.

While industrial actors exploit resources more efficiently and cause widespread environmental damage, they are more sensitive to pressure from consumers and environmental groups. Thus in recent years, it has become easier—and more ethical—for green groups to go after a limited number of corporations than than tens of millions of farmers simply trying to put food on the table.

I cited examples of campaigns that triggered major changes in how soy, cattle, and palm oil are produced in rainforest countries.

Technology is a game-changer 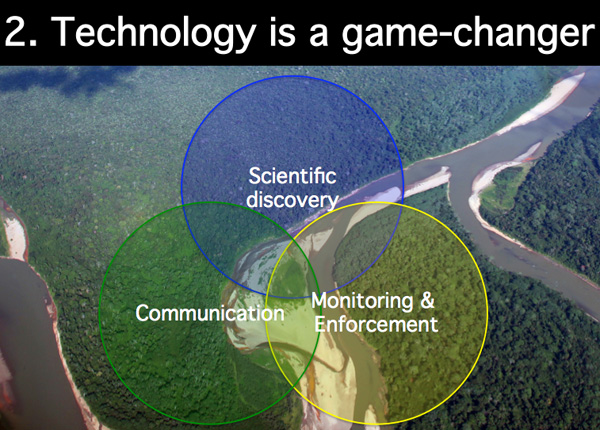 Technology is enabling a wide range of advances in conservation. I put these in three categories: scientific discovery, monitoring and enforcement, and communication.

On the scientific discovery front, I highlighted examples of advanced remote sensing technology, including the incredible Carnegie Airborne Observatory, which is being used to map forest function, ecosystem services, and biodiversity; Google Earth as a tool to “discover” habitats unexplored by scientists; the various applications of camera traps, including discovering “new” species; and uses of radio collars and RFID tags, including tracking frogs and setting up alert systems for crop-raiding elephants. 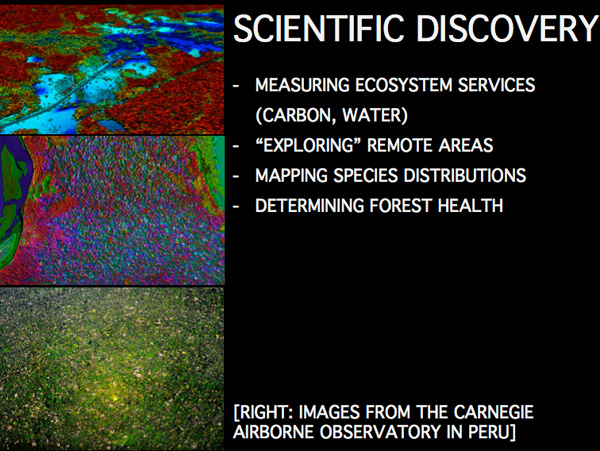 Under monitoring and enforcement, I talked about Brazil’s near-real time deforestation detection system, which a study recently credited with 60 percent of the observed drop in deforestation since 2007. I also pointed to conservation drones, community mapping initiatives using GPS, DNA barcoding for wildlife and timber, and ground-based alert systems, including the interesting Rainforest Connection project. 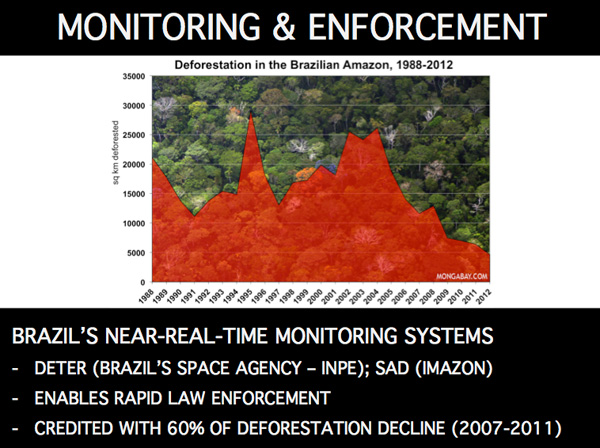 I then moved on to communication. The mobile phone revolution has certainly changed the landscape for conservation. Handheld phones have become tools for social mobilization and organization, data collection, and awareness raising. Anyone today is a potential activist or reporter with a mobile phone in hand. New platforms for participation include online petitions and crowdfunding, while new visualization tools inspire (and enable) by making data look pretty (and accessible).

Technology is no panacea 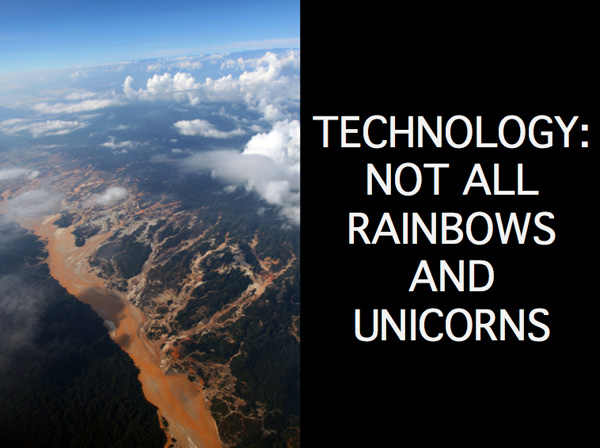 I wrapped up by making the point that “technology is not all rainbows and unicorns” — there are very substantial detrimental impacts of technology on tropical forests. Technology can speed forest destruction, identify new areas ripe for resource extraction, and facilitate exploitation of previously inaccessible areas. Meanwhile rising demand for raw materials has helped spur a mining boom that is destroying and polluting forests and rivers from Peru to Madagascar. Data centers are consuming massive amounts of power and generating huge greenhouse gas emissions. E-waste has become a big problem in some parts of the world, especially when rich countries ship toxic materials to poor regions for disposal.

Yet it is clear that technology will play a vital role if we hope to save the planet’s forests and wildlife in the face of the consumption bottleneck our planet will experience in coming decades. We need to reduce waste, get more food from less land, improve the efficiency of resource consumption, figure out how to deal with waste, and address a plethora of other severe environmental problems if we want to secure a better tomorrow for future generations of humans and the other species that share the planet.