Photos from inside Hurricane Katrina captured by NOAA plane 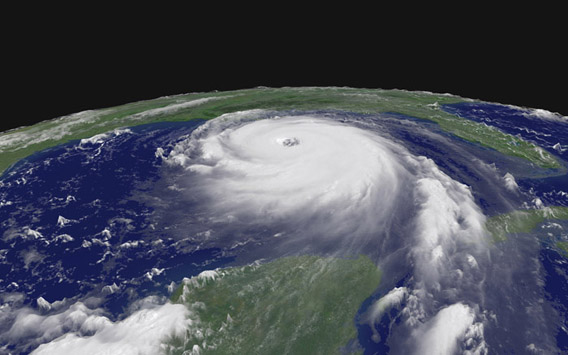 when the storm was a Category Five hurricane. Photo courtesy of NOAA

NOAA hurricane hunter WP-3D Orion and Gulfstream IV aircraft conducted ten long flights into and around the eye of Hurricane Katrina. Lt. Mike Silah, a P-3 pilot, got to see Hurricane Katrina up close and personal, especially when she was an extremely dangerous Category Five storm in the Gulf of Mexico. The day before the powerful and destructive storm made landfall on the USA Gulf Coast, Silah snapped a series of images capturing the eyewall of Katrina.

Silah is a NOAA Corps officer based at the NOAA Aircraft Operations Center in Tampa, Fla.

The NOAA Gulfstream IV high-altitude surveillance jet flew six full-endurance missions and the WP-3D Orion flew four missions to support the track and intensity forecasting efforts of NOAA’s National Centers for Environmental Prediction and National Hurricane Center. Starting with the first mission when Katrina was still a tropical storm in the eastern Bahamas, the crew flew daily between August 24 and August 28, using dropwindsondes to measure the environment surrounding the growing tropical cyclone. While conducting five daily missions and one overnight flight—when Katrina grew strongest and made the critical turn toward the Gulf Coast, the jet flew a total of 49.7 hours in five days. The NOAA crew launched 153 dropwindsondes covering 21,015 nautical miles of flight track.

Data from the Gulfstream IV, quality assured while aboard the aircraft, was fed by satellite communication directly into the primary NOAA forecasting computer models. These data helped the NOAA National Hurricane Center to first catch Katrina’s turn toward the southwest as she reached hurricane strength just before the South Florida landfall.

The G-IV continued its storm coverage as the tropical cyclone re-emerged into the Gulf of Mexico and detected perfect atmospheric conditions surrounding the storm for rapid development. As Katrina reached Category Five hurricane status, the NOAA jet used dropwinsonde coverage to help the NOAA National Hurricane Center accurately define the range of hurricane and tropical storm force winds, while adding to the accuracy of the forecasted position and time of landfall on the northern Gulf Coast.

A full 60 hours out, the NOAA National Hurricane Center, assisted by these reports, had the New Orleans and Gulf Coast area well within the cone of strike probability. Twenty-four hours prior to landfall, the center of the forecasted track was approximately 15 miles off the actual track, and 12 hours prior, the forecasted track was less than 10 miles off. At approximately 7:10 a.m. EDT, Hurricane Katrina made landfall in southern Plaquemines Parish, La., just south of Buras, as a Category Four hurricane with maximum winds estimated at 140 mph to the east of the center.

More pictures can be found at the NOAA web site while further information is available here.