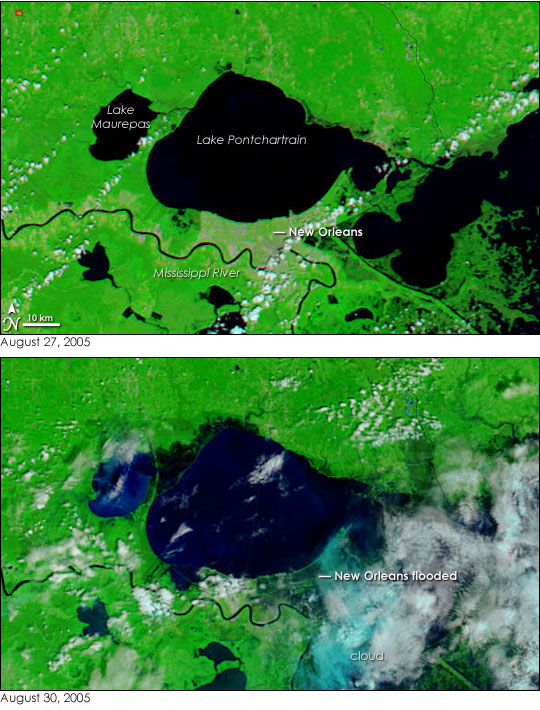 In the wake of Hurricane Katrina, much of New Orleans is under water in the top satellite image, taken on August 30, 2005, at 11:45 a.m. CDT by the Moderate Resolution Imaging Spectroradiometer (MODIS) on NASA’s Terra satellite. Early news reports say that as much as 80 percent of the city is flooded after levies failed to hold Katrina’s massive storm surge back. The flooding is getting worse as water slowly seeps into the city from Lake Pontchartrain.

On Saturday, August 27, 2005, New Orleans formed a tan and green grid sandwiched between the lake shore and the river in the lower image. Three days later, dark pools of water covered the eastern half of the city, and a large section of Lake Pontchartrain ballooned into the region immediately west of the city. Widespread flooding is visible elsewhere in the top image. Lake Pontchartrain and Lake Maurepas have nearly blended into a single body of water, separated only by a narrow strip of land. Dark smudges line the rivers flowing into both lakes, a sign that water covers the ground around them.

The images are shown in false color to make water visible against the land. Water is black or dark blue where it is colored with mud, vegetation is bright green, and clouds are light blue and white. The large images provided above provide a broader view of the region. They show flooding along the Mississippi and Alabama coast, particularly around Mobile Bay and parts of coastal Mississippi. The large images are at MODIS’ maximum resolution, but both the August 30 and August 27 images are available in additional resolutions from the MODIS Rapid Response Team.

The original release can be found here

This is a NASA news release.