An environmental disaster in New Orleans


An Environmental Disaster in New Orleans

An Environmental Disaster in New Orleans 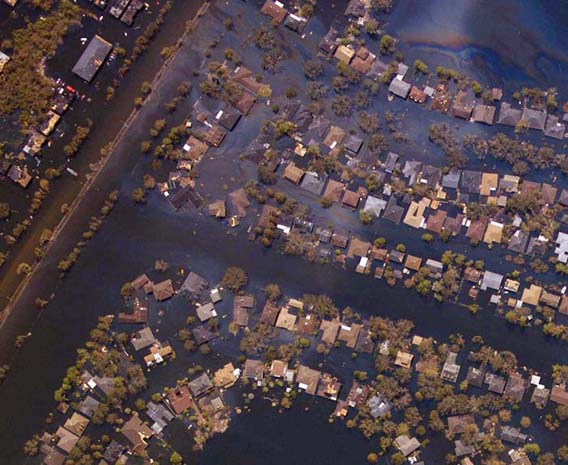 A film of oil is visible in this aerial picture of flooded New
Orleans. Courtesy of NOAA

In the state’s first major assessment of the environmental havoc in
southern Louisiana, Department of Environmental Quality Secretary Mike
McDaniel said large quantities of hazardous materials in damaged
industrial plants, the danger of explosions and fires and water
pollution were his main concerns eight days after the storm struck.

Preliminary figures indicate 140,000 to 160,000 homes were flooded and
will not be recovered, he said. “Literally, they are unsalvageable,”
he said.

He said it would take “years” to restore water service to the entire city.

“It’s almost unimaginable, the things we are going to have to deal
with,” he said.

Crews have found two major oil spills, one of 68,000 barrels at a Bass
Enterprise storage depot in Venice and another of 10,000 barrels at a
Murphy Oil facility in Chalmette, McDaniel said.

But huge amounts of oil also oozed from cars, trucks and boats caught
in the flood.

“Everywhere we look there’s a spill. It all adds up,” he said.
“There’s almost a solid sheen over the area right now.”

High-level radiation sources, including nuclear plants, have been
secured, and authorities were trying to determine the status of rail
cars in the area as well as searching out large caches of hazardous
materials in industrial plants.

Although there is a disease risk from contaminated water in the
streets of New Orleans, McDaniel said it was too early to call the
stagnant liquid a “toxic soup.” State and federal agencies had begun
quality testing.

“I’m saying that’s a little bit exaggerated,” he said. “To say it’s
toxic, it sounds like instant death walking in it. Let’s get some
better data.”

Independent experts have said the New Orleans flood water, may cause
environmental damage as it flows from the city to Lake Pontchartrain
and the Mississippi River.

More than 500 Louisiana sewage plants were damaged or destroyed,
including 25 major ones. There were about 170 sources of leaking
hydrocarbons and natural gas, officials said.

Katrina damaged large areas of wildlife habitat but it was too soon to
assess the long-term impact, McDaniel said.

“One thing about nature, it’s resilient,” he said. “Nature will recover.”

BATON ROUGE, Louisiana (Reuters) — The toxic brew of chemicals and
human waste in the New Orleans floodwaters will have to be pumped into
the Mississippi River or Lake Pontchartrain, raising the specter of an
environmental disaster on the heels of Hurricane Katrina, experts say.

The dire need to rid the drowned city of water could trigger fish
kills and poison the delicate wetlands near New Orleans and the Gulf
of Mexico at the mouth of the Mississippi. (Full story)

State and federal agencies have just begun water quality testing but
environmental experts say the vile, stagnant chemical soup that sits
in the streets of the city will contain traces of everything
imaginable.

“Go home and identify all the chemicals in your house. It’s a very
long list,” said Ivor van Heerden, head of a Louisiana State
University center that studies the public health impacts of
hurricanes.

“And that’s just in a home. Imagine what’s in an industrial plant,” he
said. “Or a sewage plant.”

Gasoline, diesel, anti-freeze, bleach, human waste, acids, alcohols
and a host of other substances must be washed out of homes, factories,
refineries, hospitals and other buildings.

In Metairie, east of New Orleans, the floodwater is tea-colored, murky
and smells of burnt sulfur. A thin film of oil is visible in the
water.

Those who have waded into it say they could see only about 1 to 2
inches into the depths and that there was significant debris on and
below the surface.

Experts said the longer water sat in the streets, the greater the
chance gasoline and chemical tanks — as well as common containers
holding anything from bleach to shampoo — would rupture.

Officials have said it may take up to 80 days to clear the water from
New Orleans and surrounding parishes.

Van Heerden and Rodney Mallett, communications director for the
Louisiana Department of Environmental Quality, say there do not appear
to be any choices other than to pump the water into Lake Pontchartrain
or the Mississippi River, which flows into the Gulf of Mexico, a key
maritime spawning ground.

“I don’t see how we could treat all that water,” Mallett said.

The result could be an second wave of disaster for southern Louisiana,
said Harold Zeliger, a Florida-based chemical toxicologist and water
quality consultant.

“In effect, it’s going to kill everything in those waters,” he said.

How much water New Orleans holds is open to question.

Van Heerden estimates it is billions of gallons. LSU researchers will
use satellite imagery and computer modeling to get a better fix on the
quantity.

Bio-remediation — cleaning up the water — would require the time and
expense of constructing huge storage facilities, considered an
impossibility, especially with the public clamor to get the water out
quickly.

Mallett said the Department of Environmental Quality was in the
unfortunate position of being responsible for protecting the
environment in a situation where that did not seem possible.

“We’re not happy about it. But for the sake of civilization and lives,
probably the best thing to do is pump the water out,” he said.

The water will leave behind more trouble — a city filled with mold,
some of it toxic, the experts said. After other floods, researchers
found many buildings had to be stripped back to concrete, or razed.

“If you have a building half full of water, everything above the water
is growing mold. When it dries out, the rest grows mold,” Zeliger
said. “Most of the buildings will have to be destroyed.”

mongabay.com users agree to the following as a condition for use of
this material: