In Vietnam’s UNESCO-certified Phong Nha-Ke Bang National Park, tourism is making its mark in the best possible way. by Michael Tatarski on 16 May 2017 |

PHONG NHA, Vietnam – Deep in the forests of central Vietnam, home to rare flora and fauna and the world’s most spectacular system of caves, tourism is benefiting the local environment. While other parts of the country have seen severe environmental degradation at the hands of tourism development – for example, two tons of garbage is dumped into world-famous Ha Long Bay every day – the opposite has been the case here.

UNESCO-certified Phong Nha-Ke Bang National Park, located in Quang Binh province, is one of the country’s largest national parks. Established in 2000, Phong Nha-Ke Bang spans a strictly regulated core zone of 123,326 hectares (over 304,500 acres) surrounded by a protective buffer zone of 220,055 hectares, including one of the largest areas of intact primary forest in Vietnam. 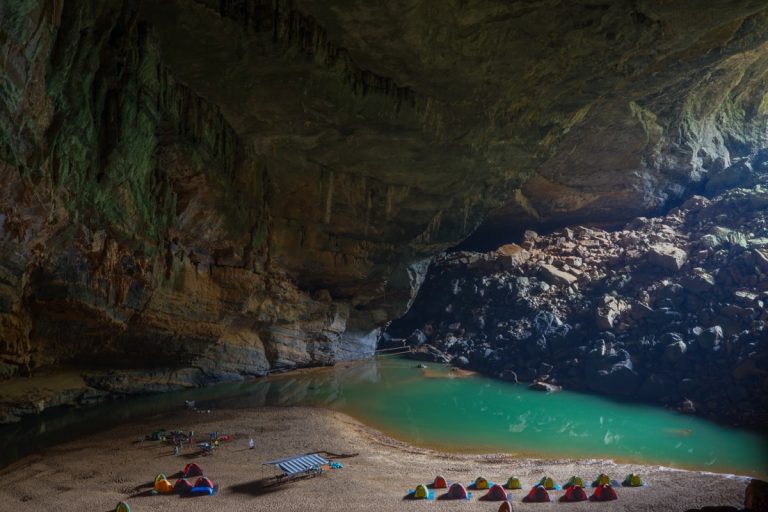 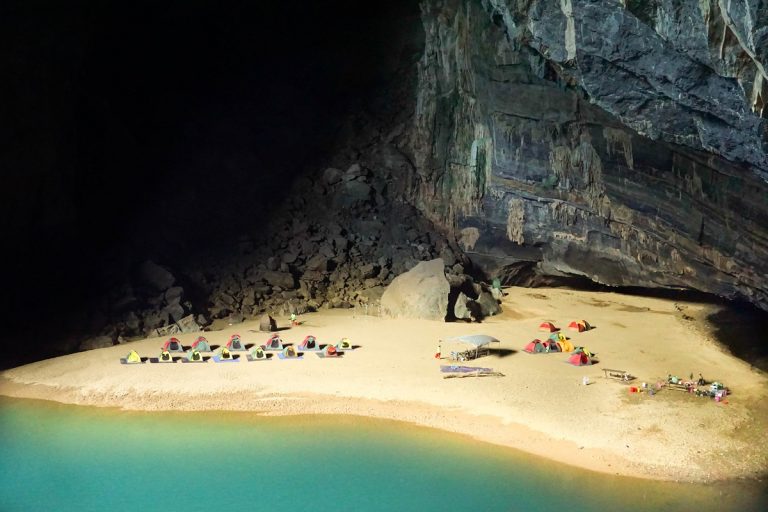 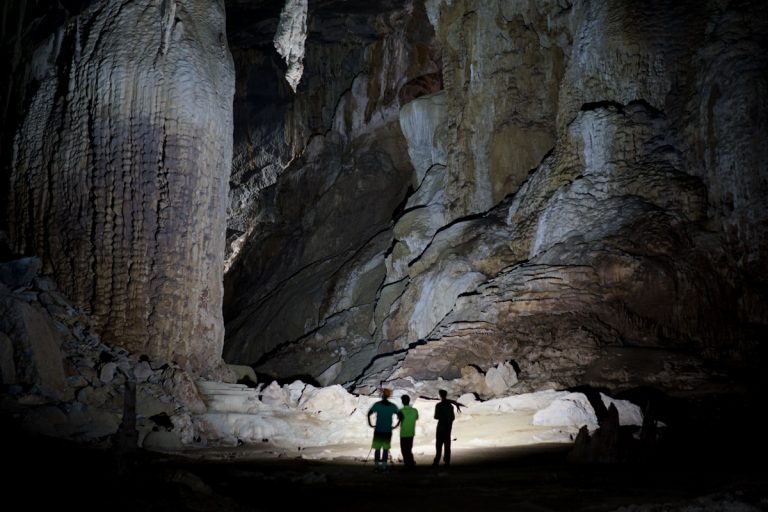 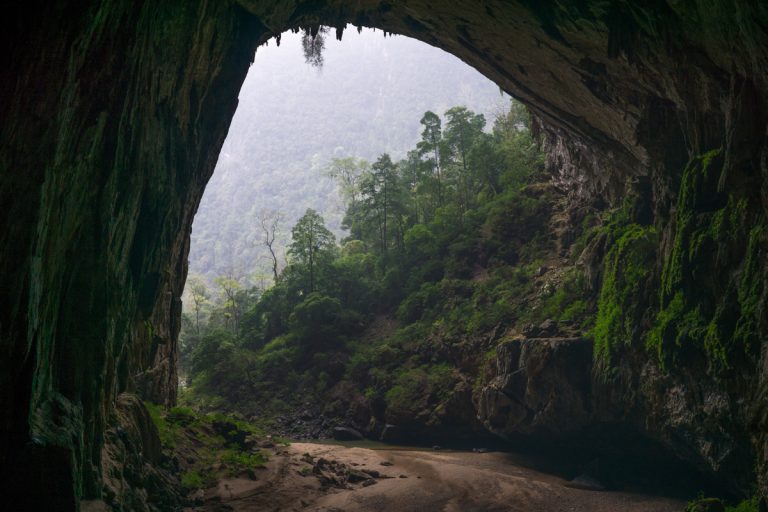 According to UNESCO the park is home to over 800 vertebrate species, including multiple endangered or threatened species of primates, birds and bats. Large mammals such as the Asiatic black bear (Ursus thibetanus) and sun bear (Helarctos malayanus) also call the area home. Though Indochinese tigers (Panthera tigris corbetti) are considered functionally extinct in Vietnam by conservation organizations like the WWF, it is possible that a few of the animals remain in this region.

Among the caves in this area is the mammoth Son Doong, currently considered the largest cave in the world. Son Doong’s main passage is 3.1 miles long, 660 feet high and 490 feet wide, large enough to accommodate a Boeing 747 with room to spare. Hang En, the third-largest cave in the world, is located nearby. Many of these caverns have been mapped through expeditions led by Howard Limbert, the former head of the British Caving Association, and his wife Deb.

The Limberts have been surveying caves in Vietnam since the early 1990s. They have advised Oxalis Adventure Tours — currently the only company licensed to run tours into Son Doong and Hang En caves in the park — on how to create sustainable tourism in a country where such efforts are in short supply.

“The guy who runs Oxalis had the idea of running adventure tours,” Howard said during a recent interview at the Oxalis office on the banks of the Son River near the park. “There were five people in the company at the time (in 2011) so we took a few small groups around the national park.”

It was slow going at first, as visitors had to hike into the park from Phong Nha, whereas today they are dropped off on a road much closer to the trailhead. Several caves are now open to tours, ranging from day trips to multi-night expeditions that include camping inside caverns. Prices start in the hundreds of dollars.

“Very few tourists came, but a Lonely Planet guy came when there was very little written on the area and I took him down to Tu Lan Cave in 2010 and 2011, just on a day trip, and he said it was the best thing he’s ever done in Vietnam,” Limbert said. “Before we knew it, we started running tours and they were all full.”

The tours grew in popularity, and with Son Doong getting prominent coverage from National Geographic, CNN and Good Morning America, Phong Nha-Ke Bang has become the go-to destination in Vietnam for adventurous travelers.

Oxalis has a virtual monopoly on cave tourism thanks to its license, and its staff has grown to number over 500 people. According to Limbert, over 95 percent of the company’s employees come from around Phong Nha, the area’s main town. This has led to significant economic growth among locals.

“If you go up the road you see houses being built, the area is booming and people are doing well,” he said. “I want the local people to do well and we’re trying to push as many people as possible to start homestays since they’re all thriving and doing well.”

Tran Thi Phuong is a tour operator for Oxalis who grew up in Phong Nha. “When I graduated from university I joined Oxalis at the end of 2011,” she says. “There weren’t many hotels then, just some hostels.”

Today the main road through town is lined with small hotels, guesthouses and restaurants catering to international clientele.

“It’s been really good for local people because it’s created a lot of jobs,” Phuong said. “My parents were farmers, and so were my husband, brother and sister. Now they work for Oxalis as porters and servers at the restaurant. They make more money and have a more comfortable life.”

Other local employees share similar stories. Phan Van Thin, the company’s deputy operations manager, grew up nearby in a farming family. He said his quality of life is much better than when he was a child.

“Phong Nha is developing very fast,” he said. “Fifteen years ago there was nothing here, tourists would come, see one cave and leave. Now there are a lot of buildings and hotels and activity and the living standard of the local people is quite good.”

Tourism and the environment have an uneasy relationship around the world, with masses of visitors often damaging the natural areas they came to see. Vietnam is no stranger to this, with famous scenic areas like the mountain town of Sa Pa and the tropical island of Phu Quoc suffering extreme environmental degradation over time from the impact of visitors.

In Phong Nha, however, the two sectors appear to be working well together.

Before cave tourism took off, many locals used the surrounding forests for resources, in addition to hunting and logging. The creation of the national park almost two decades ago helped curtail these practices, while environmentally focused tourism has helped as well.

Effective enforcement has also played a key role in the area’s conservation.

“Nobody can go into the park without a ranger,” Limbert explains. “Even on our tours we have to have a ranger, so that stops any hunting or logging, and that’s the massive benefit of tourism. Wherever we run our tours there’s no more hunting or logging, because not only are we in there all the time, but rangers are in there all the time and the porters and guides are the best jungle men you can imagine so they know if something is going on.”

Deputy operations manager Phan Van Thin adds that many of the porters gathered resources from the protected forest before joining Oxalis. “Now they have stopped doing that and they join the tours with us and they realized that protecting and conserving the environment is good for them,” he said. “It may create more jobs for them.”

Nguyen Van Dung is one of the porters who has benefited from the work. Born in Phong Nha to a poor farming family, his job as a porter has changed his life.

“A long time ago my father would go into the jungle to collect rattan and wood, but he doesn’t do that anymore,” he shares in Vietnamese through a translator. “The work is good, with stable income every month, and I can help my family a little bit.”

Dung adds that the work is also allowing him to plan for the future. “I want to build a house for my family next year and for more people to come so everything is stable.”

Oxalis’ dedication to the environment is impressive. On a recent two-day trek into massive Hang En, the guides and porters ensured that not a single piece of trash was left behind in the park. At the campsite on an otherworldly beach inside the cave, buckets full of dried rice husks serve as toilets. Once the group leaves the cave, the contents of the buckets are buried outside where they become compost over time.

Tourism and economic development have done untold damage to Vietnam’s environment, but the largely untouched nature of Phong Nha-Ke Bang is heartening. Outside of the tiny village of Doong, located near the start of the trek to Hang En, there are no signs of civilization along the 15.5 mile round-trip hike.

The forest is in pristine condition, and the sound of monkey calls can be heard frequently. Butterflies and countless birds flit across and above the trail. The interior of the cave, which consists of three gigantic caverns, looks as though humans have never set foot in it, even though hundreds of Oxalis-led groups have now been through it.

Entering Hang En is an exhilarating experience. As you approach the low entrance a cool breeze exits the cavern, offering a hint of the size of the underground space. After passing through the opening and scrambling over a pile of rocks you are greeted to a jaw-dropping view of the main chamber, which has its own lake and sandy beach.

Porters go ahead of the group to set up tents on the beach, and they look like ants in the vastness as they busily work. Afternoon light streams in from an arch stitched into the side of the mountain Hang En lies beneath. The chirps of nesting sparrows, called en in Vietnamese and the cave’s namesake, echo through the space.

Two additional chambers are explored with guides, one of which looks out onto an enormous arched gateway at the other end of the cave. The pitch-blackness of the third cavern hides spectacular stalagmite and stalactite formations. Even in a country famed for its natural beauty, Hang En is a marvel.

Phong Nha’s tourism boom is still young, and there is reason for concern given Vietnam’s poor environmental record. According to current government regulations there can be no construction within protected areas of the park until 2030, yet the leaders of Quang Binh province are currently moving forward with initial plans to build a cable car system inside Son Doong, reportedly to facilitate tourism. 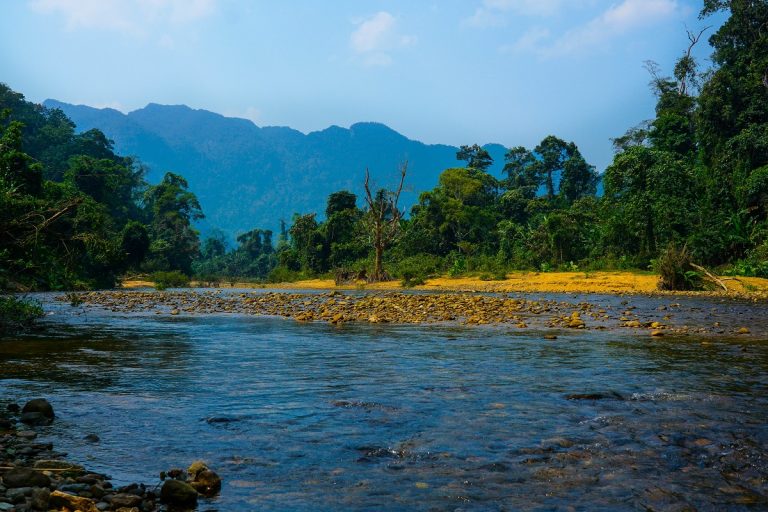 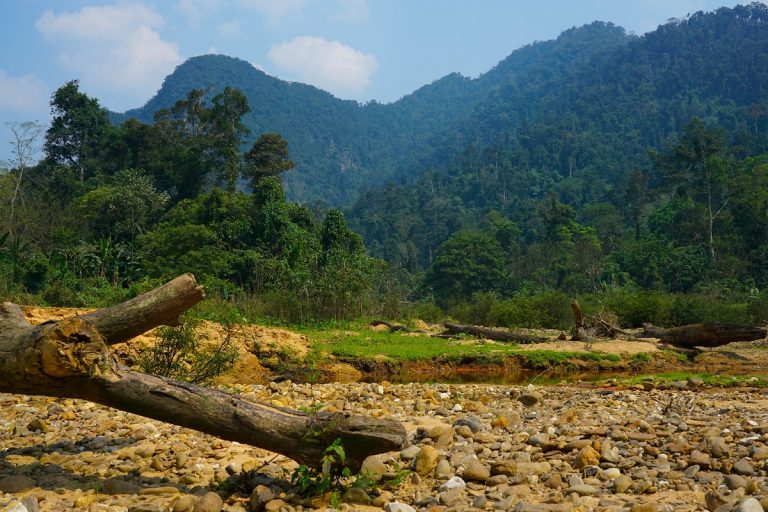 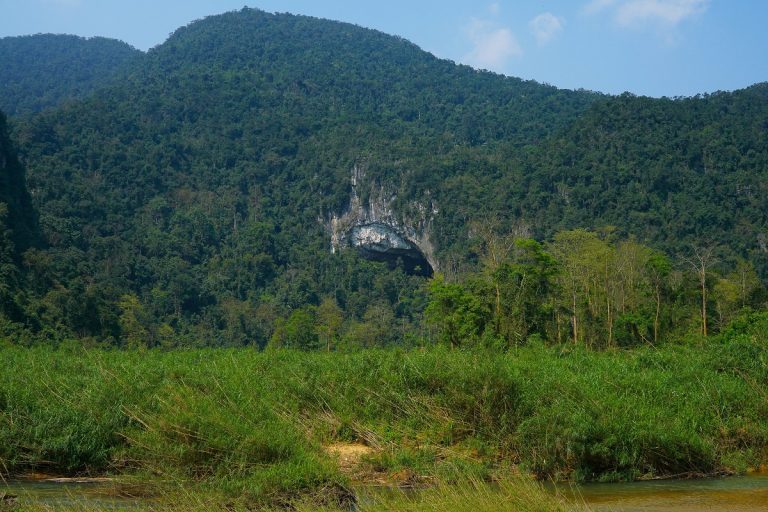 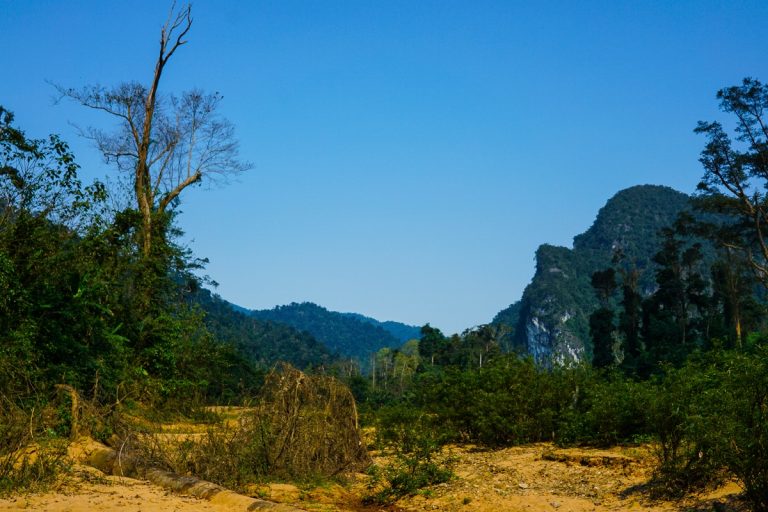 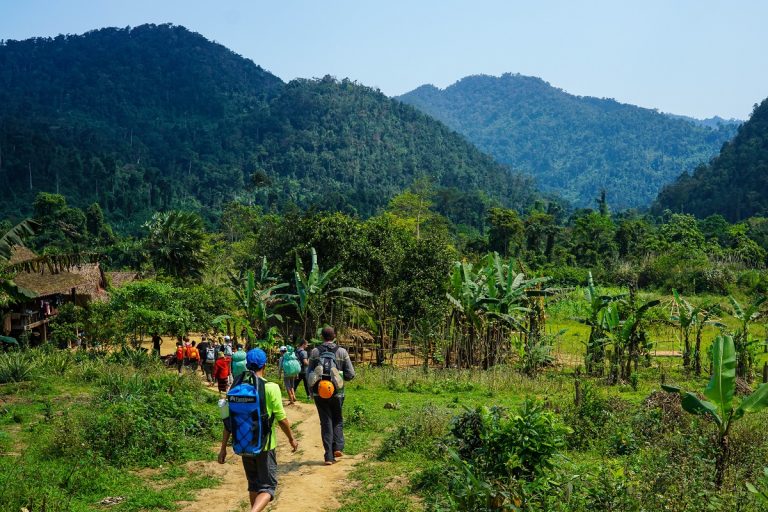 Earlier this year rumors spread that the provincial government was allowing developers to survey the cave in order to determine the feasibility of a cable car. This prompted a public outcry, including an online petition to save Son Doong that garnered nearly 75,000 signatures.

Officials claimed the rumors were unfounded, but earlier this month it was revealed that the Ministry of Culture, Sports and Tourism had approved surveys of the cave. Meanwhile the head of the province shared that they intend to build a cable car inside Phong Nha-Ke Bang.

Nonetheless, Limbert and Oxalis employees are optimistic about the park’s future.

“It’s doing well and it’s actually looking after the environment,” Limbert shares. “It can be done…every tour is sustainable, it’s just your group.”

The area is much different from when Limbert first arrived though. “It’s changing rapidly,” he admits. “I hope that as many locals as possible can gain from it before the big companies come in from Hanoi and Ho Chi Minh City and take over. A lot of them have gotten on the bandwagon with homestays and little shops, so they’re invested.”

“Mass tourism is good for the locals, but inside the park you want tourism in a different way, like we’re doing now,” he said. “I hope to see more jobs for local people created and help the local people to do things like build homestays. That is our hope for the future, and we’re trying to promote this area to the world so more people know about it and come to create more jobs for locals.”

Banner image: Trekkers don headlamps and helmets at one of Hang En’s entrances. Photo by Michael Tatarski for Mongabay.

Michael Tatarski is a freelance journalist based in Ho Chi Minh City, Vietnam. You can find him on Twitter at @miketatarski.