KATHMANDU — On the morning of Jan. 16, the day after Yeti Airlines Flight 691 crashed near Pokhara International Airport in Nepal, killing all 72 people on board, authorities at the newly inaugurated airport were alarmed by yet another incident.

A plane plying the same Kathmandu-Pokhara route as the ill-fated Flight 691 struck a steppe eagle (Aquila nipalensis) upon approach to the airport. The plane didn’t suffer major damage, but the endangered bird of prey was killed. Following the incident, a team from the airport quickly cleared the debris from the runway, according to a photographer who witnessed the incident and shared the photos online.

The incident came as various international experts suggest a possible link between the Jan. 15 crash, one of the worst in Nepal’s aviation history, and the possibility of a bird strike. Mongabay reported last year about conservationists’ concerns over the large number of birds, especially vultures, that frequent the area near the airport, and the risks posed to both aviation safety and wildlife conservation.

“The crash took place after the pilot decided to approach the [north]east-[south]west runway from the western side after making all preparations to land from the eastern side,” a Kathmandu-based pilot told Mongabay.

“Landing from the western end at the new airport requires technical expertise which the pilot may not have had,” the captain said. “We don’t know why they decided to change the approach at the last moment. During the previous flight earlier that day on the same route, the same pilot had landed the plane from the eastern end.”

Two other pilots Mongabay talked to also noted the change of approach. All three declined to be named as their comments could be seen as insensitive.

Amit Singh, an experienced pilot and founder of India’s Safety Matters Foundation, told the Associated Press that a bird strike may have changed the pilot’s mind to land from the usual eastern end.

Conservationists have long raised concerns about potential bird strikes at the airport, especially involving larger birds of prey and threatened species. The Pokhara Valley is home to 470 species of birds and all nine species of vultures found in South Asia, including the critically endangered slender-billed vulture (Gyps tenuirostris) and white-rumped vulture (Gyps bengalensis). The steppe eagle killed in the Jan. 16 strike isn’t native to the region, but is one of many migratory species that pass through each year.

The new international airport, spread across 200 hectares (nearly 500 acres), sits 3 kilometers, or less than 2 miles, east of Pokhara’s existing domestic airport, which it will eventually replace. Officials say the facility will serve as Nepal’s third international hub, hosting flights to and from neighboring India and China as well as Southeast Asia, seen as a potential tourism market. 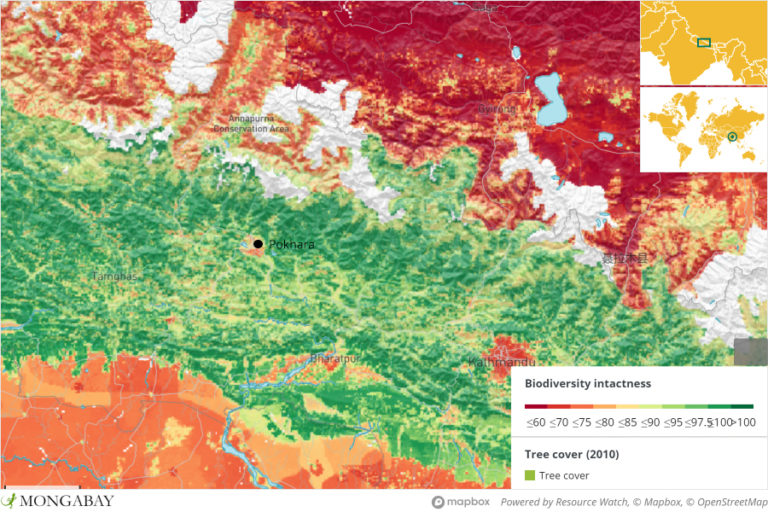 The opening of the $216 million facility had been delayed several times in the past, but following an announcement by Jeevan Ram Shrestha, then minister for culture and aviation, flights started on Jan. 1, 2023, even as officials struggled to meet the deadline.

Their main headache was a landfill site close to the airport, which drew several threatened species of vultures, but was relocated only a few days before the launch of the new airport. Birds, already accustomed to feeding at the landfill site, still keep coming to the area, which means the risk persists of aircraft-bird collisions.

For conservationists, another area of concern was the Bijaypur River on the eastern side of the airport. The river is highly polluted and carries all forms of solid waste, including animal carcasses.

“These things attract the vultures to the area around the airport,” a conservationist told Mongabay, requesting anonymity as he is also in mourning from the Yeti Airlines crash. “With the relocation of the landfill site, municipal officials also can’t collect waste regularly. This means people will throw more waste into the river, attracting more vultures to the area, and increase the chance of collision with aircraft.”

He suggested the city now needs a comprehensive waste management plan to prevent vultures and other scavenger birds from hovering around the airport area.

“Although a detailed investigation, which is already underway, will find out the cause behind the crash, it’s important that we don’t take the bird collision issue lightly,” the conservationist added.

Abhaya Raj Joshi is a staff writer for Nepal at Mongabay. Find him on Twitter @arj272