What happened in the world’s rainforests in 2022?

There were some hopeful developments for tropical rainforest conservation in 2022, including declines in the deforestation rate in Indonesia and the Brazilian Amazon, new high-level policy commitments supporting forest protection, and expanding recognition of the importance of forests for human well-being.

But the outlook for tropical forests nonetheless remains tenuous, with the impacts of climate change and degradation worsening, ongoing violence against environmental defenders, and macroeconomic trends that could accelerate forest conversion in the near future.

The following is a look at some of the major tropical rainforest storylines and developments in 2022.

One of the most important developments for tropical rainforests in 2022 was the outcome of Brazil’s presidential election, where Luiz Inácio Lula da Silva narrowly defeated incumbent Jair Bolsonaro.

Lula, who presided over a sharp drop in Amazon forest deforestation during his terms in office between 2003 and 2010, made saving the Amazon a central part of his bid for the presidency, pledging to rehabilitate Brazil’s international standing on climate and environmental issues. His platform was in stark contrast to Bolsonaro who oversaw the dismantling of environmental regulations and an accompanying increase in deforestation.

As president-elect, Lula has pledged to restore the infrastructure that underpins Amazon conservation efforts, proposed the creation of a Ministry of Indigenous Peoples, and established an alliance between Brazil, Indonesia, and Democratic Republic of Congo to rally support–and funds–for rainforest protection.

Deforestation drops in the Brazilian Amazon 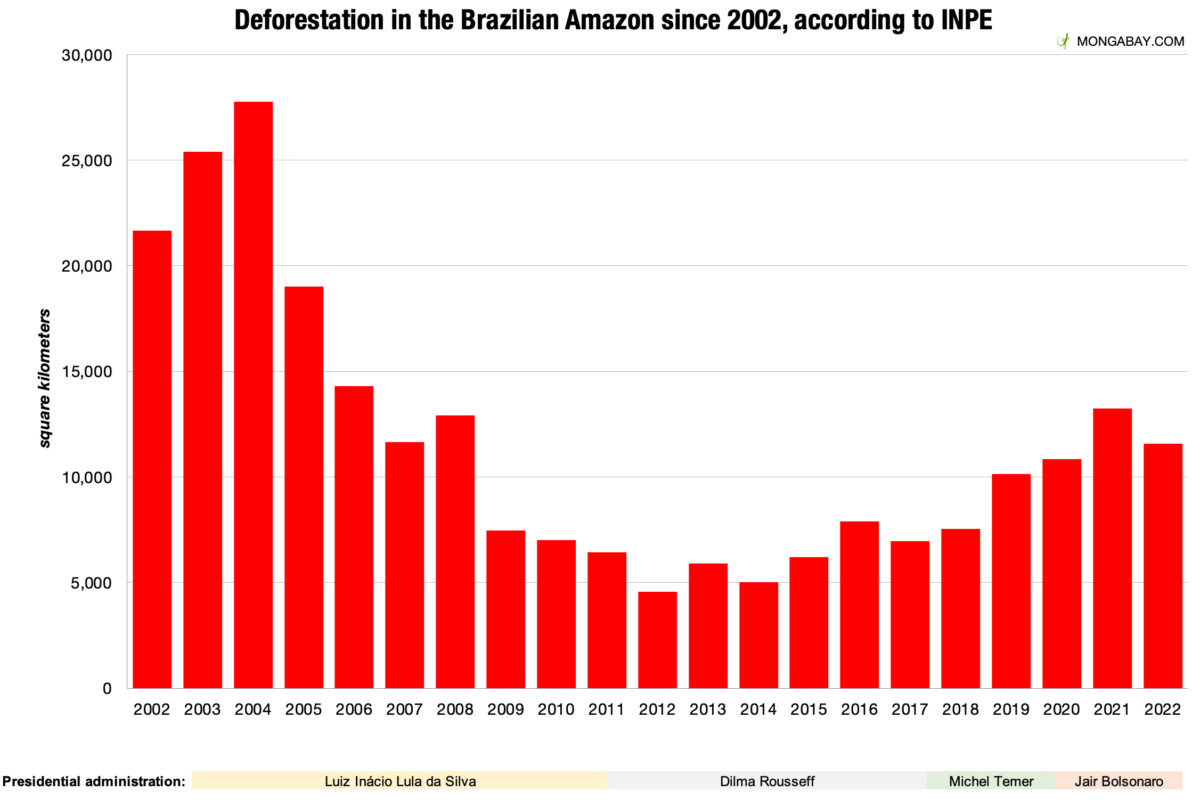 The scale of the decline caught some observers by surprise given deforestation alert activity in 2022 was roughly on par with 2021. A final analysis of the 2021/2022 data is expected to be released in the first half of 2023.

The Amazon rainforest accelerates toward a tipping point

Despite the apparent drop in deforestation, the outlook for the Amazon is increasingly ominous.

For years researchers have been warning about the potential for deforestation, forest degradation, and warming climate to trigger a “tipping point” where vast large swathes of the Amazon transition from rainforest to a drier savanna-like ecosystem. In 2022, a number of studies added further data points to suggest that the tipping may be fast approaching for parts of the Amazon.

Particularly alarming was an analysis by the Monitoring of the Andean Amazon Project (MAAP) which concluded that the eastern third of the Amazon may have already passed a critical threshold for forest loss. That region is especially important because of its role in driving moisture from the Atlantic to the central Amazon.

The Brazilian Amazon wasn’t the only part of the world to experience a drop in the rate of tropical forest clearing: Deforestation across Southeast Asia – led by Indonesia – continued to decline.

Forests in the region have benefitted from the lack of a strong el Niño the past half decade. Fire and deforestation are generally worse during El Nino events due to dry conditions, which exacerbate fire risk and encourage forest clearing. 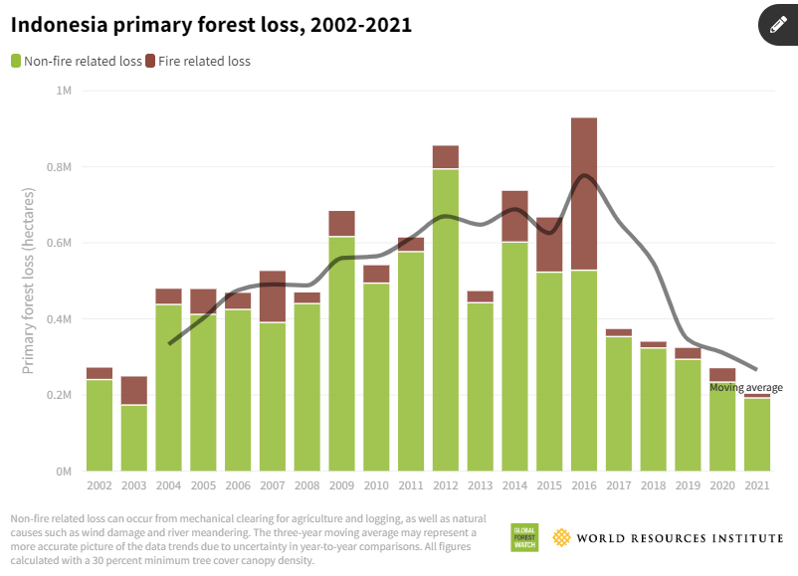 It’s not exactly clear why deforestation for palm oil production has fallen so precipitously, though some observers argue that corporate sustainability commitments and government regulations may be contributing factors.

On this latter point, the Indonesian government has taken steps in recent years to rein in deforestation, including establishing and renewing a moratorium on new forestry concessions. Notable developments in 2022 specifically included: Re-establishing a lapsed REDD+ agreement with Norway, enabling it to receive compensation for reducing its rate of forest loss; initiating audits of the palm oil sector for tax-dodging and failure to abide by benefit-sharing mandates with local communities; and revocation of palm oil and mining permits, including in Papua.

But some of the progress on forest protection efforts in Indonesia was undercut by other government moves, including stepped up hostility from the Ministry of Forestry and Environment toward independent researchers and scientific discourse, a new criminal code that would reduce penalties for environmental crimes and restrict activism, and a continued push to expand biofuels and biomass production.

Regulations on imports linked to deforestation

Unlike other regulations, the new law applies regardless of whether deforestation is legal or not–a detail that has displeased exporting countries. But Indonesia nonetheless added sustainability components into its timber legality system to help ensure its products can continue to be imported into the E.U.

The EU is estimated to be responsible for 16% of tropical deforestation associated with international trade, behind only China.

With agriculture, mining, and resource extraction accounting for more than 90% of tropical forest loss, commodity price inflation in 2022 prompted worries that forests could face increased pressure if prices persist at high levels. The increase in the prices of commodities like soybeans, the average global price of which at the end of November 2022 stood 70% above the January 2019 level; palm oil (+62%); crude oil (+54%), gold (+34%), and beef (+23%) was particularly notable, though most have dropped significantly since peaking shortly after Russia’s invasion of Ukraine.

While the rising commodity prices can contribute to forest clearing, the relationship is not a straight line. Other macroeconomic factors like currency exchange rates, the availability and affordability of credit, inflation, and the relative attractiveness of other investment options can influence whether forests are converted for commodity production or extraction. Given the economic uncertainty ahead, it’s difficult to anticipate how these factors will impact rainforests in coming months and years.

2020 and 2021 were two of the worst years on record in terms of violence against environmental defenders, but the issue made global headlines in 2022 when Brazilian anthropologist Bruno Pereira, a prominent Indigenous rights defender, and Dom Phillips, a British journalist, were murdered in Brazil’s Javari Valley.

Pereira and Phillips were only two of many killed for exposing environmental crimes and defending nature in 2022.

Momentum around Indigenous peoples’ rights has been building within the conservation sector for the past decade. This movement has manifested in Indigenous peoples gaining more representation within conservation organizations and institutions, increased funding for Indigenous NGOs and projects, and greater recognition of the contributions Indigenous and local communities make toward protecting ecosystems that underpin the wellbeing of people, animals, and the planet.

In 2022 there were a number of notable developments around Indigenous rights’ that may have significant implications for tropical forests. A few examples include:

After a two-year delay and a change in venue, the U.N. biodiversity summit–known as COP15–met in Montreal, Canada where delegates agreed on a target to protect and restore 30% of the world’s land and oceans by 2030. Countries also agreed to reduce government subsidies that harm biodiversity by $500 billion a year, mobilize $200 billion per year in biodiversity funding, and require large companies and institutions to “monitor, assess, and transparently disclose their risks, dependencies and impacts on biodiversity through their operations, supply and value chains and portfolio,” among other targets. As noted above, the Kunming-Montreal Global Biodiversity Framework included specific references to “respecting the rights of indigenous peoples and local communities,” in contrast to top-down, fortress conservation approaches often embraced in the past.

In theory, the Kunming-Montreal Global Biodiversity Framework should increase funding and the level of ambition for biodiversity conservation in coming years. Given that tropical rainforests account for the majority of terrestrial biodiversity and are among the world’s most threatened ecosystems, which also store vast amounts of carbon and underpin critical ecological functions, the agreement should boost forest conservation.

Going into 2022, global deforestation was at the high end of the range for the past twenty years. According to data from the University of Maryland, tropical primary forest loss in 2021 amounted to 3.75 million hectares (9.3 million acres)–roughly the same level of the previous three years if burned areas are excluded. Tropical forest countries lost a total of 11.1 million hectares of tree cover–an area the size of Cuba. 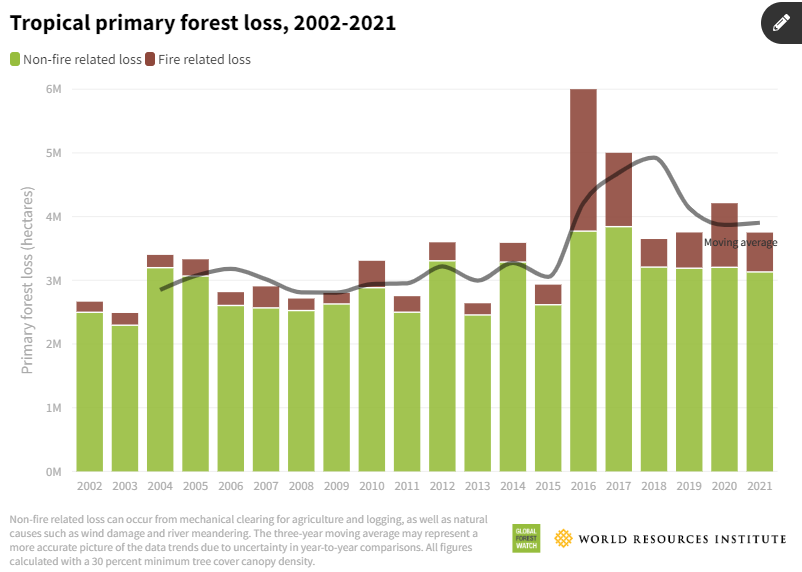 We won’t have the data for 2022 until March or April 2023, but based on developments in Brazil and Indonesia, there’s reason to believe that when the final numbers are tallied, tropical forest loss may be lower in 2022 than it was in 2021.

This post has highlighted some of the major trends and developments for tropical rainforests in 2022. Mongabay published more than 300 rainforest-related stories in English alone this year, so there is plenty that was left out of this recap. Take a look at our rainforests feed–or the country-specific rainforest feeds like Indonesia, Peru, and Brazil, for more. Also, if you speak Portuguese, Spanish, French, or Indonesian, you can catch other rainforest news on those sites.

Next week we’ll be sharing some of the issues to watch out for in 2023. Until then, best wishes for the new year.