KALUMPANG, Indonesia — In January, as representatives of a hydropower company explained their plan to dam the river near his home, Kasman wondered if he was staring at annihilation.

Kasman is the head of the village deliberation body in Kalumpang, a village on the Karama River in western Sulawesi, one of Indonesia’s biggest islands. Jakarta-based PT DND Hydro Ecopower wants to harness its fast-flowing waters as part of a 190-megawatt clean energy project meant to help wean the nation off coal.

As the pitchmen assured locals that the reservoir formed by the dam would not inundate their village, Kasman wasn’t convinced.

“How do we know they can be believed?” he told Mongabay.

Indonesia runs on coal. The fossil fuel accounts for 63% of the energy mix in the archipelagic Southeast Asian nation, whose 275 million people make it the world’s fourth-most populous country.

To reduce Indonesia’s reliance on coal, President Joko Widodo urged business leaders to develop hydropower, taking advantage of the some 4,400 big and medium rivers dotted throughout the country’s thousands of islands.

But while hydroelectric dams can help cut carbon emissions, they have also displaced tens of millions of people worldwide, submerging huge areas of land and forcing rural communities to pick up and relocate.

In the area around Kasman’s village, the prospect of dam-induced flooding carries another implication: that ancient archaeological sites could go underwater.

The Karama River, which flows through western Sulawesi and empties into the Makassar Strait, holds important sites from the Austronesian expansion, thought to be one of the most expansive prehistoric migrations in human history.

According to the theory, Austronesian-speaking peoples from Taiwan used new seafaring and navigation technology to settle much of present-day Southeast Asia, not to mention islands as far west as Madagascar and as far east as Polynesia.

Besides linguistic evidence, the theory is supported by archaeological findings from sites such as Minanga Sipakko, located just a few kilometers from Kasman’s house. In 2020, scientists announced that fossilized rice husks unearthed from the site showed that the Oryza sativa rice strain, the oldest in Indonesia, originated from the Karama valley.

Scientists say the Karama River valley holds more such treasures. But if the dam goes ahead, the river’s water level would rise to 62 meters (203 feet) above sea level, according to an inundation map produced by a consultant hired by the company, seen by Mongabay. This could damage valuable archaeological sites, according to Budianto Hakim, an archaeologist from the government’s National Research and Innovation Agency.

“From upstream to downstream, on both sides of the river, all of it has archaeological potential, and much of it has yet to be exposed,” Budianto told Mongabay. “We’ve only uncovered about 10% of it.” 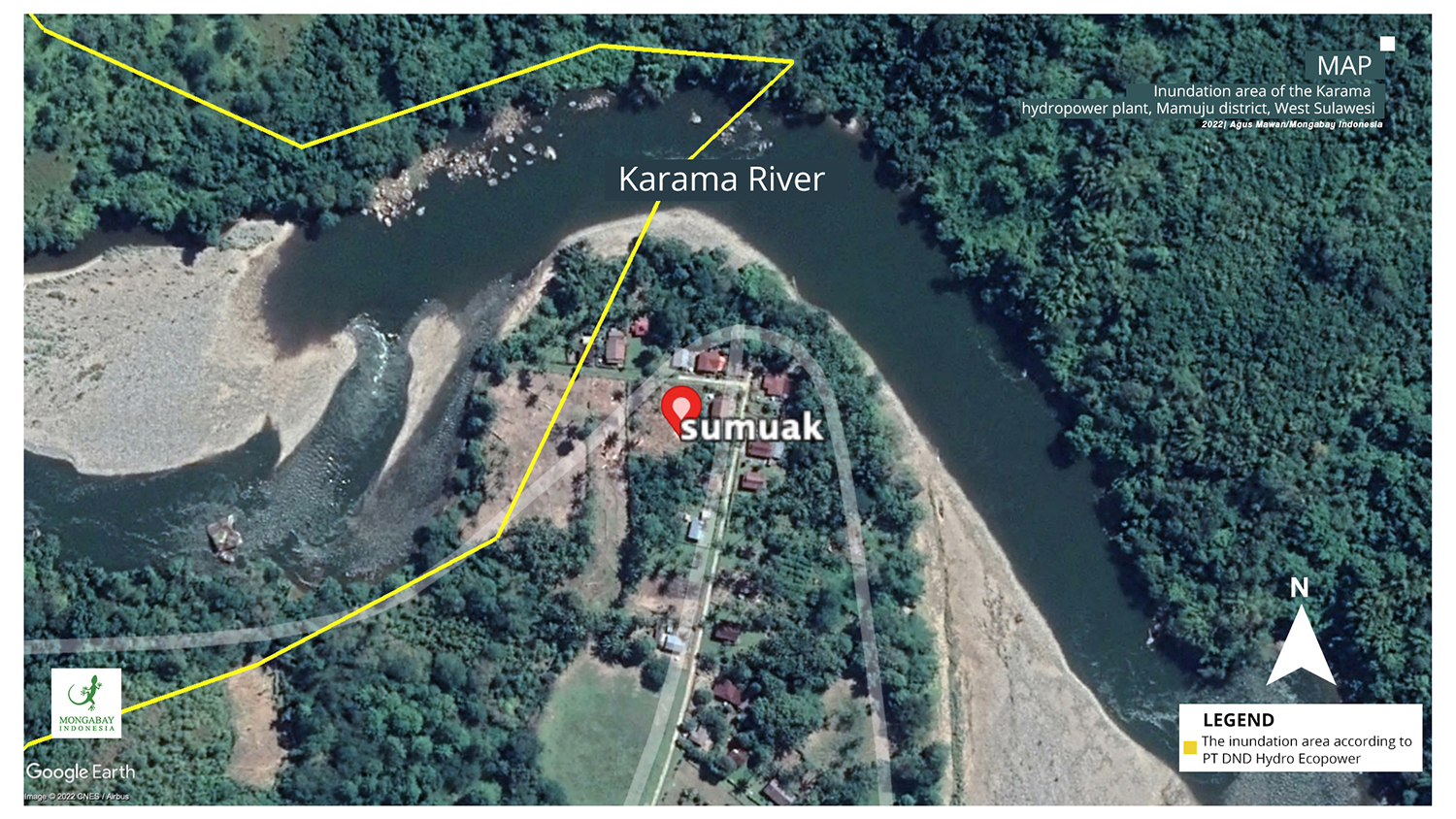 Budianto said he was shocked to see the inundation map. “If these areas are submerged, we don’t know the archaeological potential that could be submerged along with it,” he said. “Maybe that’s where the most important sites are, where the oldest sites are.”

While West Sulawesi is largely without electricity problems — electrification in the province has reached 98.4%, according to the energy ministry — officials have said additional power will be needed to serve future industries in the area.

As of now, the Karama dam still waits for a recommendation from the West Sulawesi environment service.

“Up to now, it has not been issued — it’s under process,” said Aco Takdir, head of the West Sulawesi environment office.

Banner image: Karama River, which will be dammed for hydropower. Photo by Agus Mawan/ Mongabay Indonesia.

This article was first reported by Mongabay’s Indonesia team and published here, here and here on our Indonesia site in August 2022.

World Commission on Dams. (2000). Dams and Development: A New Framework for Decision-Making. Retrieved from https://archive.internationalrivers.org/sites/default/files/attached-files/world_commission_on_dams_final_report.pdf