HONG KONG — Thousands of grayish, oval-shaped oysters pepper the mudflats of far northern Hong Kong, clustering together on fragments of rock lining the shoreline or clamping onto abandoned concrete posts.

Despite being stuck in between a proverbial rock and a hard place — the bustling megalopolis of Hong Kong sprawling behind and the spiky skyline of Shenzhen and its 17 million inhabitants just across the water — the area is rippling with activity.

Crabs scamper between shells and burrow holes underground; mud hoppers splash between the brackish puddles left by the low tide; and birds zip between branches of mangroves that thrive in this uniquely urban environment.

“You can see that this place is full of life,” says Anniqa Law Chung-kiu, conservation project manager for The Nature Conservancy (TNC) Hong Kong, as she carefully treads through the watery mud. “The oyster reef is playing an important role in the local ecosystem.”

The reef she speaks of is new, one of several her team fashioned from the old posts in the mudflats off Pak Nai, a historic hamlet along Deep Bay in Hong Kong’s northern New Territories region. These diverse habitats provide homes for fish and other marine life. Their creation has opened up space for horseshoe crabs, an endangered species dating back 475 million years. They stabilize shorelines in a way that both mitigates coastal erosion and allows seagrass to lay root. And, crucially, they act as filters to clean up the water, cutting the high levels of nitrogen that have led to toxic algae blooms in Hong Kong.

“The value of oyster reefs is proven, but we need to restore them,” Law adds.

TNC’s work is part of a broader project with the University of Hong Kong’s Swire Institute of Marine Science (SWIMS) to restore oyster reefs across the city, where there are now four projects in three areas. The first launched in Deep Bay at the settlement of Lau Fau Shan in May 2018. The following year, the project installed a second reef at Tolo Harbor, to the east, that is being used as a biofilter to support a fish farm. Then in June 2021, the project established another reef on the grounds of Hong Kong’s airport on the north of Lantau Island.

But at Pak Nai, where the reef was established in 2020, the researchers are testing a different approach: reconfiguring abandoned oyster farms instead of starting from scratch, which requires bringing in new substrate for the larvae to grow on. Oyster farmers once grew oysters here on the old concrete posts but abandoned them in the mudflats many years ago after adopting more modern techniques, such as the “off-bottom system,” in which oysters grow on rafts floating in the water.

Law and her colleagues took this leftover substrate to create new reefs, dislodging the old posts from the muck, where they once stood vertically in neat rows, and arranging them in jumbled piles that more closely resemble natural oyster reefs.  In the process, they are moving the posts seaward, where the intertidal zone is wetter and oysters thrive, and restoring the landward soft shore and seagrass intertidal habitats to a more natural state.

Their efforts have proven remarkably effective. While most oyster reef restoration projects require seeding with juvenile oysters cultivated in hatcheries, the waters at the four Hong Kong sites teem with so much larvae that the oysters grow independently. The only thing they need is a substrate to attach to, such as the new concrete-post reefs at Pak Nai, which are now encrusted with oysters two years after being established.

“The water has such high levels of larvae, we were blown away by the figures,” says Marine Thomas, TNC’s senior conservation program manager, referring to a feasibility study. “The conditions here allow oysters to thrive all by themselves.”

SWIMS biodiversity surveys there found 61 species in the abandoned farms versus just 26 in the neighboring mudflats, and 10 times greater biomass. However, it’s too soon to tell whether the restored reef patches have greater biodiversity than the abandoned farms, according to Thomas. But she adds that horseshoe crab numbers are increasing in the restored soft shore and seagrass habitats. At the Lau Fau Shan restoration site, SWIMS researchers found a small crab, Nanosesarma pontianacense, in 2020, recording it for the first time in Hong Kong.

Hong Kong, where the salty waters of the South China Sea meet with fresh water from the Pearl River Delta, is in some ways ideal for oyster reef growth. That’s been the case for generations: some of the city’s earliest written records reference its oysters, which have been an important commodity for more than 700 years — starting when the Tang Clan settled at Deep Bay and started oyster farming.

In recognition of that long history, UNESCO has inscribed Hong Kong oyster farming — which uses a traditional method of growing oysters on bamboo poles or rock pieces angled in the mudflats — as an “intangible cultural heritage.” One species, Magallana hongkongensis, bears the very name of the city. It was identified as a new species in 2003 after DNA analysis.

But in Hong Kong, decades of development through large-scale coastal reclamation, dredging for lime, and overharvesting have decimated the once-abundant local oyster populations. Globally, the picture is similarly grim. A 2011 study estimates that 85% of oyster reefs have been lost worldwide, making them one of the most endangered marine habitats on the planet.

Law, Thomas and other Hong Kong researchers say it’s vital to halt and reverse that decline, because oyster reefs, which form complex 3D structures, are an important marine ecosystem. Restoring reefs along coastlines can mitigate the damage caused by development, they say, and safeguard the city’s marine riches.

In addition, oysters have a powerful ability to clean water. M. hongkongensis has “among the highest filtration rates recorded of any oyster species,” being able to “filter up to 30 liters [8 gallons] of water an hour in summer temperatures,” which is equivalent to a 7-square-meter (75-square-foot) reef filtering one Olympic swimming pool daily, according to a 2020 study.

“It’s well known that oysters filter a lot of water,” says Bayden Russell, associate director of SWIMS, who led the research. “That’s one of their primary functions in an ecosystem. But we were surprised by how high that filtration was in the summer.”

The oyster aquaculture industry in Hong Kong has historically played its own role in degrading reefs through overexploitation. So in addition to investigating how oyster reefs can benefit the local environment, TNC is also exploring how its research can help small-scale oyster farmers survive in a sustainable manner.

“Oysters are part of my life, they are inseparable from me,” says Chan Shu Fung, a third-generation oyster farmer from Lau Fau Shan who took over the family business in 2015. “It feeds my family, they provide an income.”

On several occasions since he took over the family farm, the majority of Chan’s oysters have died, tanking the farm’s income. “The mass mortality events didn’t happen before,” says Chan, who has been receiving insight about oyster growth from TNC’s researchers. “Any environmental data I can get is important. But I just want there to be oysters in the future.”

Others have joined the reef restoration cause. In a cross-sectoral collaboration called “Oysters Save Our Seas” (Oyster SOS), farmers, academics, schools and NGOs are working together to improve public engagement and awareness through exhibitions, talks, and project-based studies and field activities for local students.

In the meantime, TNC is continuing to expand its operations. The group is now recycling oyster shells from local restaurants as substrates for larvae to grow on. With help from local communities, TNC has collected about 36 metric tons of discarded shells and placed about 21 metric tons of them on the seabed in three of its projects. 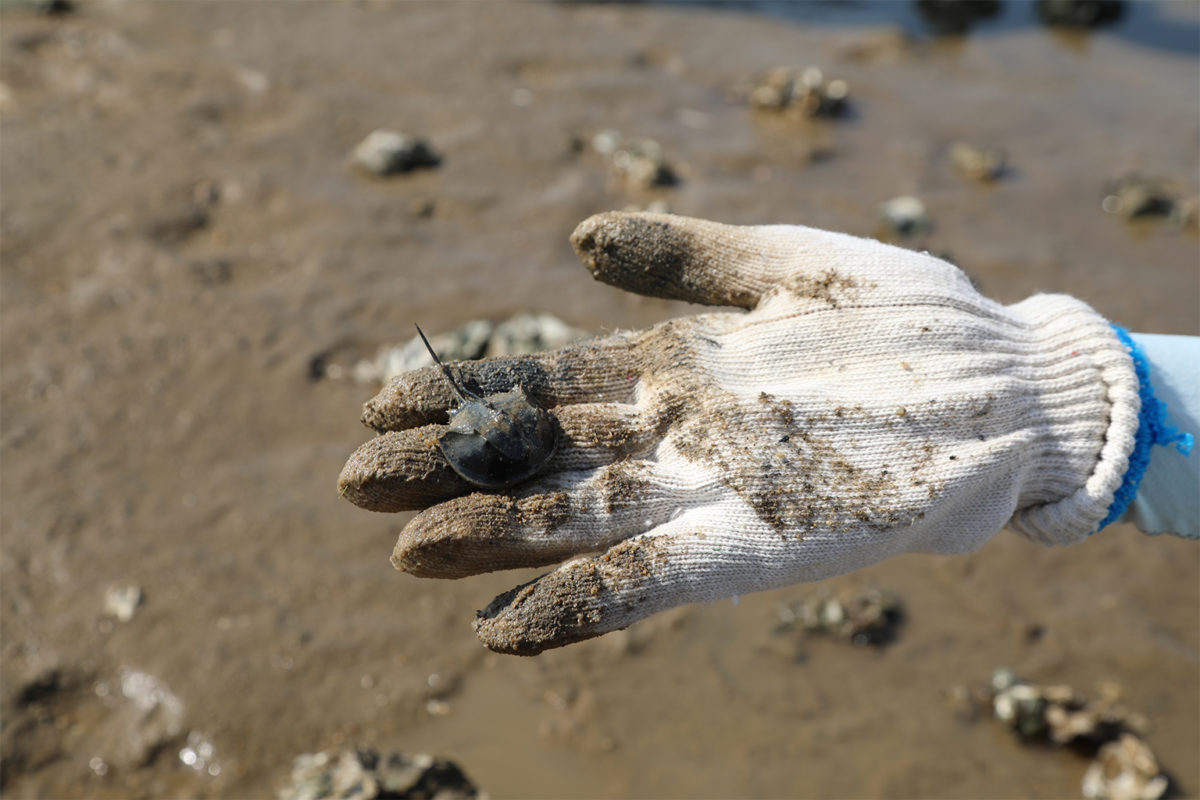 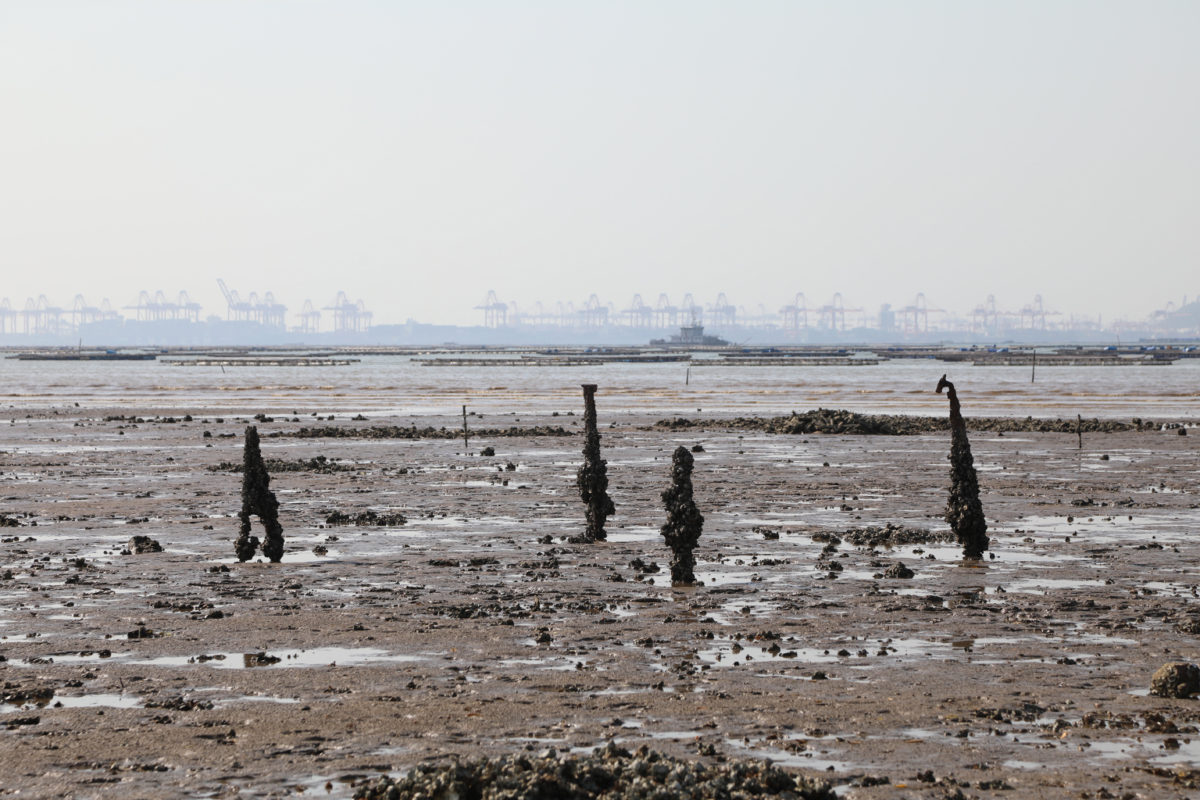 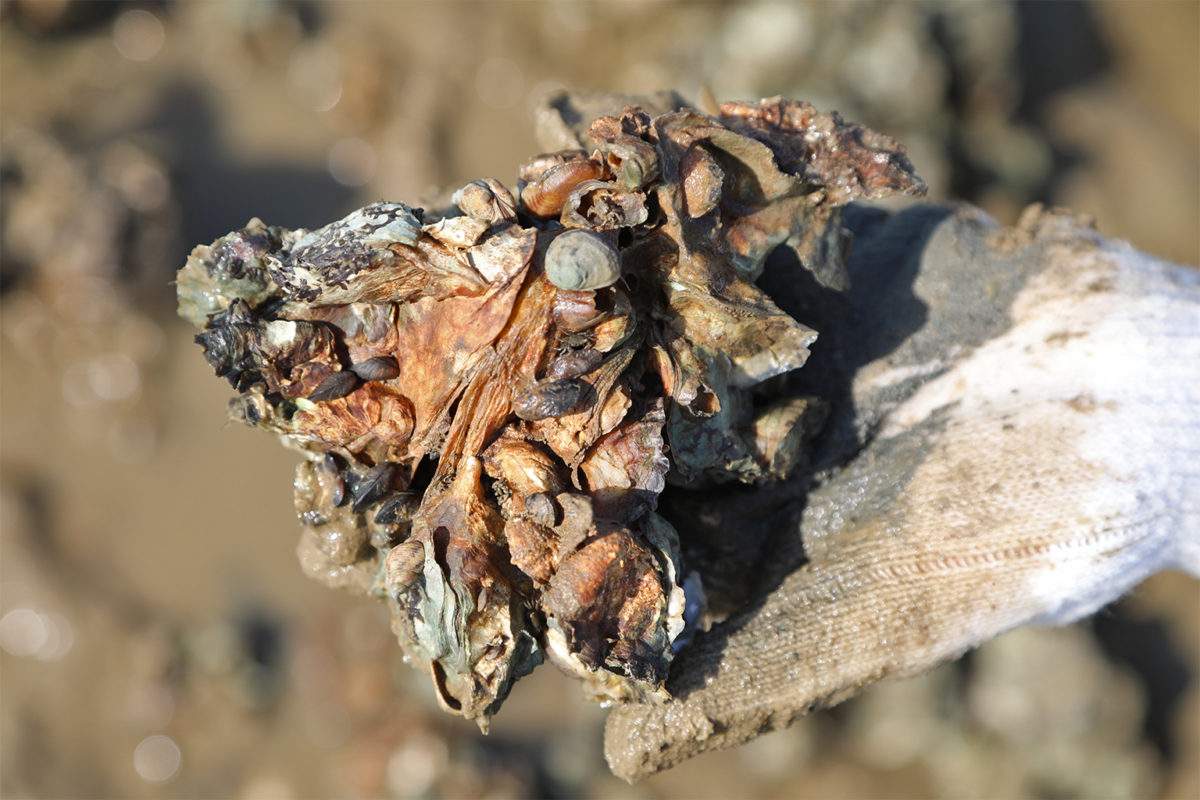 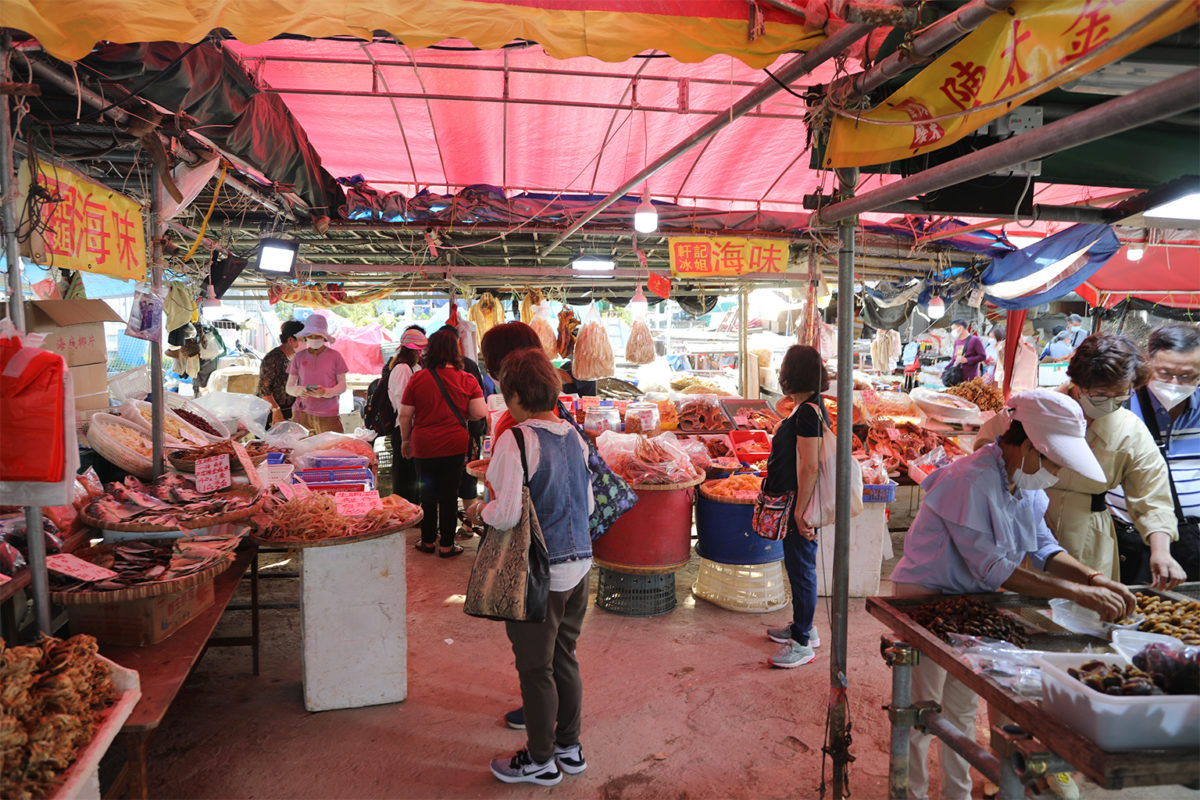 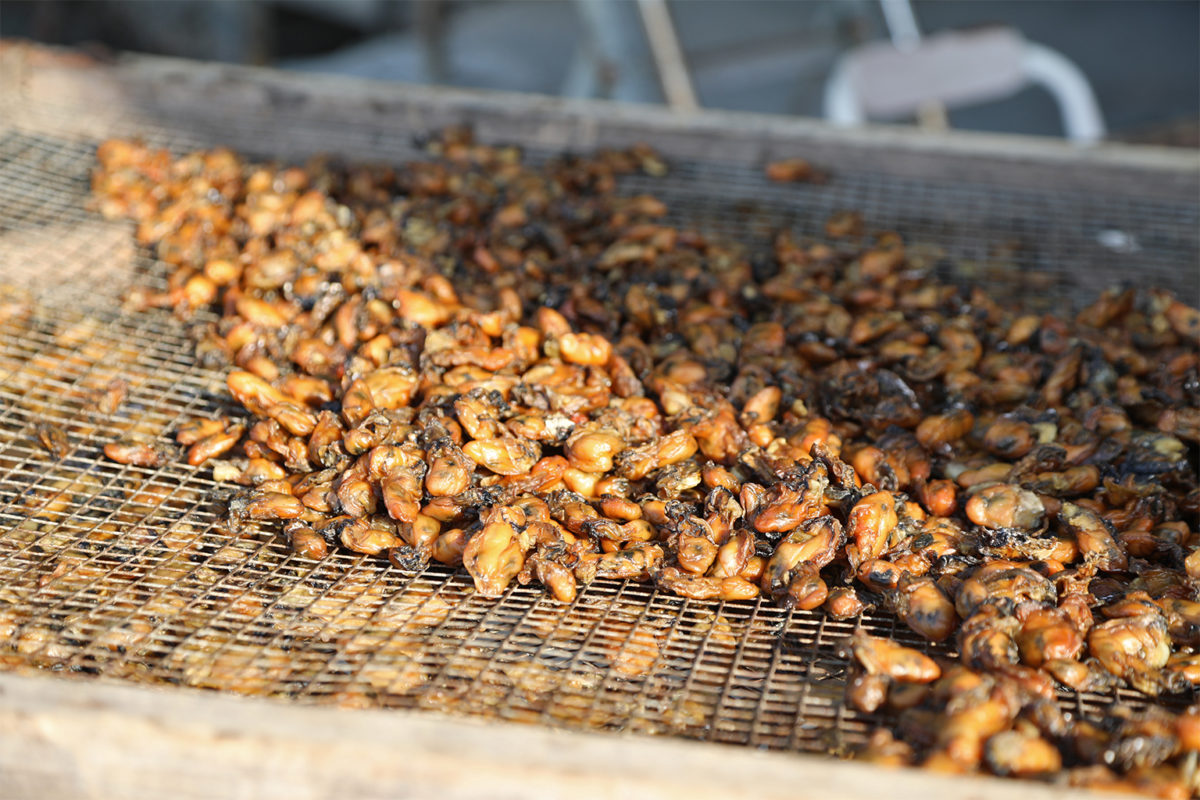 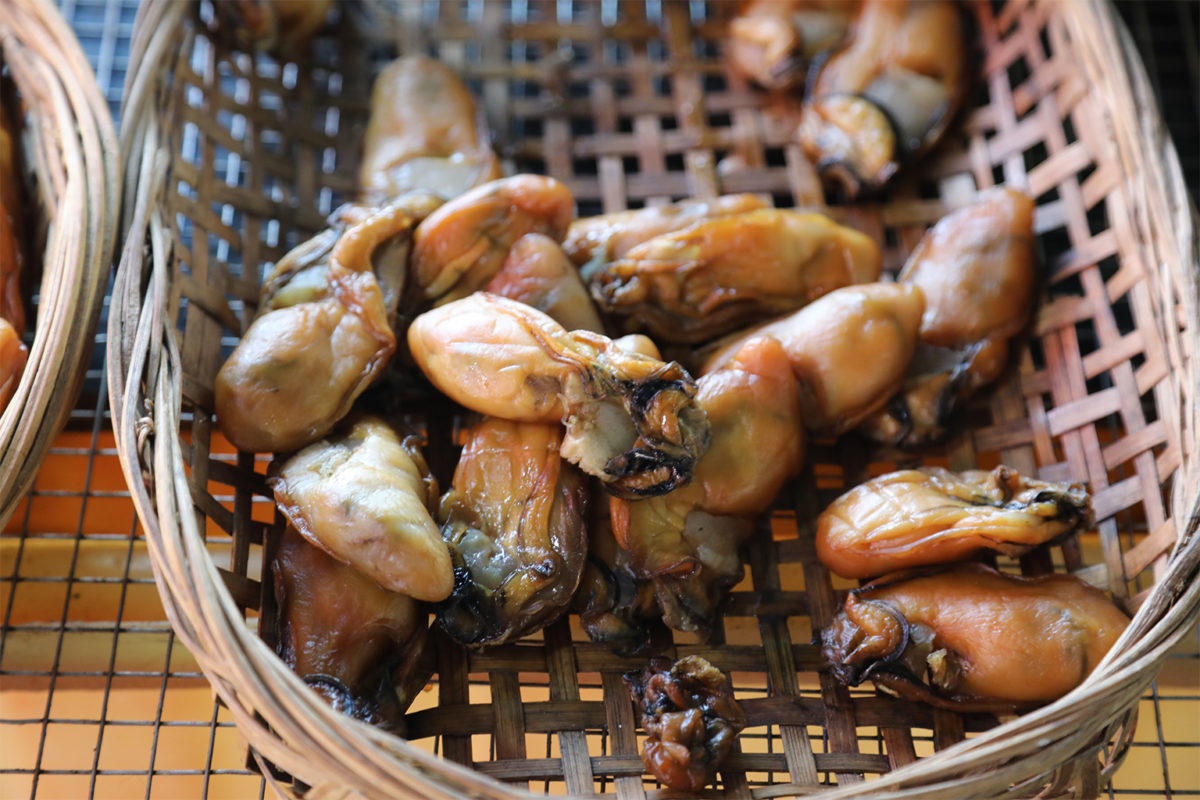 TNC conservationists say they hope their work in Hong Kong, one of the world’s coastal megacities, can act as a blueprint for others to follow even as the pressures of population growth and development increase.

After years of work, Hong Kong authorities are gradually latching onto the idea of reef restoration. After initially hesitating because it had never been done before, the Agriculture, Fisheries and Conservation Department has quickened the process to greenlight restoration projects.

Continued community engagement will be key, especially as development proceeds along the coast. In Pak Nai, the project, part of a habitat management plan that includes restoring the area’s mangroves and seagrass, has the firm backing of the village chief, who is working closely with the conservationists.

But the area is one of the last remaining undeveloped stretches of coastline in the city, and with the Northern Metropolis program aimed at housing 2.5 million people in the region, pressure could grow.

“It’s about educating people to know the value of oysters,” Russell says. “Because their value is proven and Hong Kong is just one example of that.”