The protected swathes of primary Amazon Rainforest in the Paru State Forest in the north of Brazil became the fifth-most deforested conservation unit in October, official data show. Illegal land-grabbing and cattle ranching leave environmentalists concerned about the protection of the region’s giant trees, including the tallest in the biome.

Click the play button to hear the article read aloud:

“The amount of deforestation in [Paru State Forest] is little, but it has been suffering small numbers of deforestation since 2008,” Jakeline Pereira, a researcher from the Brazilian conservation nonprofit Imazon, told Mongabay by phone. “It started moderately and then made some leaps, mainly since 2014.”

“It’s complicated because although the deforestation rate in Paru State Forest is not so high, there shouldn’t be any deforestation in this area,” Pereira said. 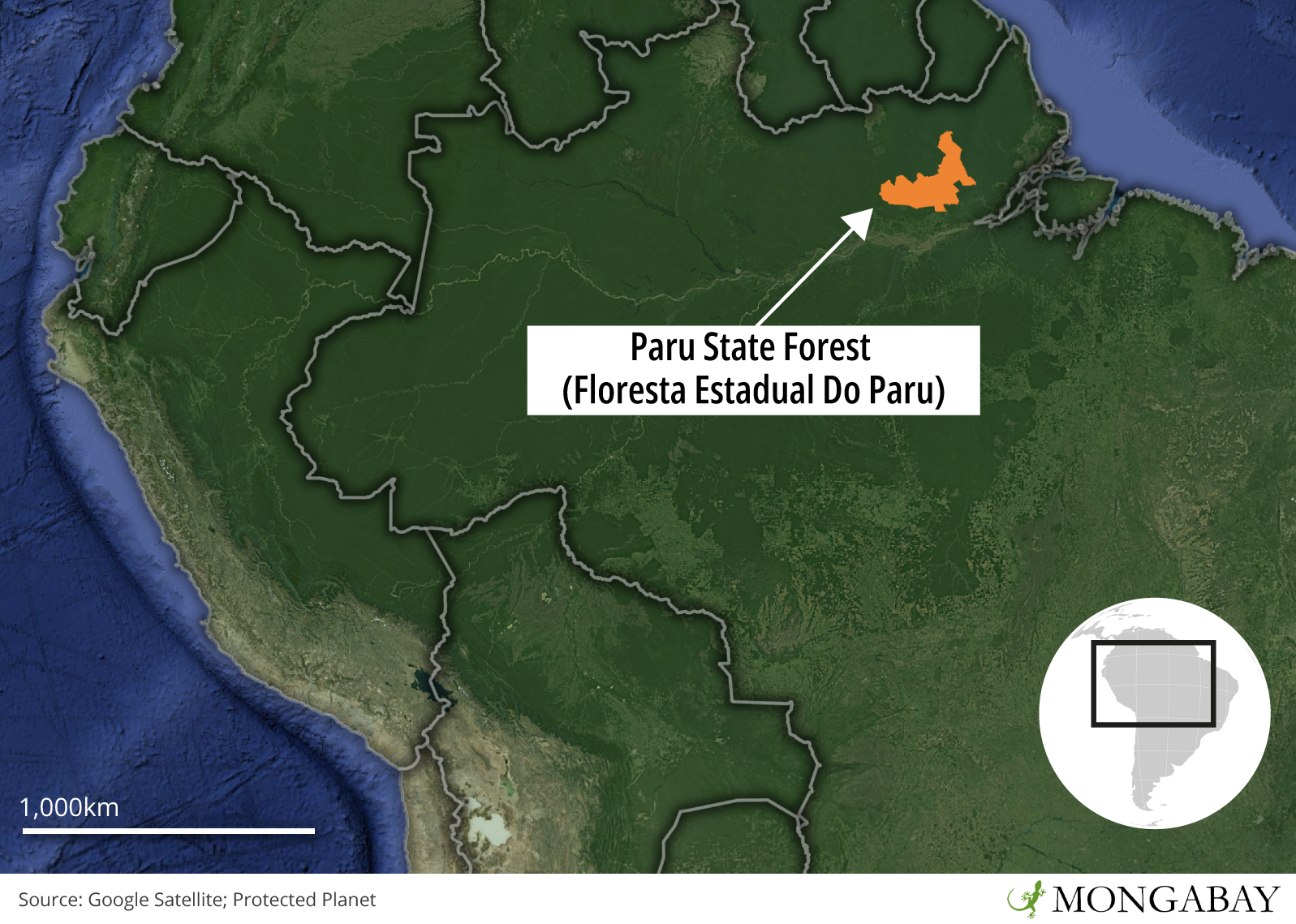 Increases in deforestation across the Amazon are linked to criminal activity, which has flourished since current President Jair Bolsonaro took office in 2019. His aggressive budget cuts undermined the federal agencies’ capacity to punish criminals due to chronic funding shortages, leading to record-high deforestation rates in the last four years, including in protected conservation units and Indigenous lands.

“What’s inside Paru State Forest are those individuals who invaded the conservation unit to put farms, to put cattle, to [illegally] extract gold — and they’re getting close to the reserve’s giant trees,” Pereira said.

The region is home to some of the Amazon’s largest trees, including the tallest of them all: a 400-year-old red angelim, standing at 88.5 meters (290 feet) high and almost 10 meters in circumference. Discovered at the end of 2019, the tree stands the same height as a 30-story building.

This giant tree can take up to 40 tons of carbon, almost the same as a hectare (2.4 acres) of forest. “This forest is super important for the strategy of climate change protection,” Pereira said. “An important point is the carbon storage of this tropical forest.”

The Paru State Forest is the world’s third-largest sustainable-use conservation unit in a tropical forest, covering an area of 3.6 million hectares (8.9 million acres). As such, certain economic activities, such as collecting Brazil nuts and limited mining, are permitted for the few hundred people who live there, provided they have the appropriate authorization as outlined in by law. The forest sits within a 22 million-hectare (54.3 million-acre) protected area known as Calha Norte in the state of Pará, forming the biggest block of protected areas in the world.

“This region is an important area of endemism, with several endemic species and threatened animal and plant species,” Luciano Montag, an associate professor at the institute of biological sciences in the Federal University of Para, told Mongabay by email. Calha Norte also contains communities of Quilombolas and Indigenous peoples, including uncontacted groups.

The authorized activities within the area involve little to no deforestation, and any vegetation clearing is overseen by government officials to ensure minimal damage. Environmentalists are concerned about the illegal deforestation that occurs without permission and is linked to individuals who live outside the reserve.

Ensuring compliance with sustainable practices and monitoring illegal deforestation are among the tasks of the new Paru State Forest Advisory Board overseen by Semas, the environmental agency for the state government of Pará. The board began its work in 2010 and is renewed every two years, with the latest renewal taking place in November. It’s made up of 18 members of government and civil society representatives, including NGOs, community members, researchers, and public agencies.

Its main role is to ensure adherence to the management plan, a document that guides types of permitted use of the territory. “The group is also responsible for overseeing or monitoring whether the government is really fulfilling its role,” said Pereira, who is a board councilor. “We are there as a civil society board, to treat and act in the protection of the conservation unit.”

One of the challenges the group will face in protecting the region is fraudulent land claims, said Pereira. “We identified almost 99 illegally registered properties through the Rural Environmental Registry (CAR) inside the conservation unit,” she said. Land-grabbers use a legal self-declaration system to register and legitimize stolen land, which makes it easier to trade the property even when it’s still owned by the state.

“All of this is a danger to the maintenance of this highly important conservation area,” Pereira said.

Annual data show that Pará experienced a 21% drop in its deforestation rates this year, the “result of investment in public policies that favor sustainable land use and the fight against environmental crimes,” including surveillance and stronger law enforcement actions, according to a statement from the Pará government. The state accounted for 36% of all Legal Amazon deforestation in 2022 (INPE’s deforestation year runs from August to the following July), compared with 40% in 2021.

Even with this reduction, vigilance is necessary to guarantee that protected areas remain intact, environmentalists warn. “Even with these conservation units, most are subject to exploitation of natural resources, mainly wood and ore,” Montag said. “The monitoring of mining and deforestation activities must be controlled and supervised.”

Banner image: Researchers remain unsure as to why some red angelims grow so tall. The tallest at 88.5 meters (290 feet) high is just a little shorter than the Statue of Liberty from its pedestal, which stands at 93 meters (305 feet). Image © Havita Rigamonti/Imazon/Ideflor.