With fracking promising a quick energy boost, can Colombia say no?

“For the first time ever, there is a government that is against fracking,” says Amarilys Llanos Navarro. An activist and lawyer with the Cesar Without Fracking and Gas Movement, an anti-extractivist movement in Colombia’s northern department of Cesar, Llanos is referring to Gustavo Petro, who took office as president in August and has vowed to ban fracking.

Anti-fracking legislation has never managed to pass Colombia’s parliament. But in August, several NGOs put forward a bill prohibiting fracking across the country, including controversial pilot projects testing the feasibility of fracking, shale gas and tar sands extraction. With the change in government and broad support against extractivism, Llanos says she’s hopeful that this time the bill will pass.

Fracking first came to prominence in Colombia in 2014, when the government of Juan Manuel Santos introduced regulations to promote commercial production. The Colombia Free of Fracking Alliance (ACLF), a civil society movement of about 100 organizations, including Llanos’s, has been campaigning against the practice since 2016.

“The argument that mining generates employment is not true,” Llanos says.

Fracking is now promising the same things as coal mines did 30 years ago in her home department of Cesar, she tells Mongabay. But while Cesar has the highest coal production in the country, contributing to about 2% of national GDP, it remains the fourth-poorest of Colombia’s 32 departments, with the second-highest unemployment rate. 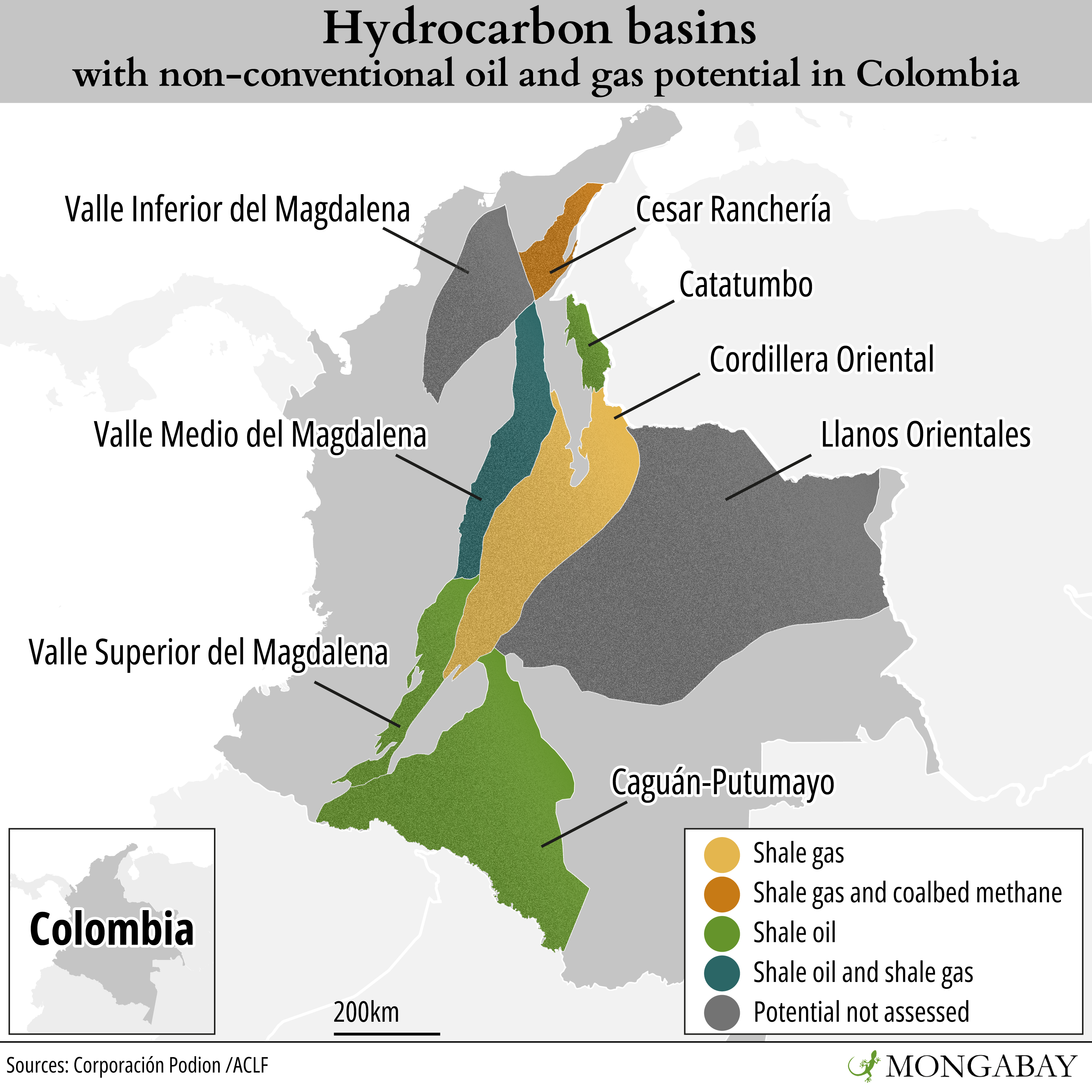 “These are extremely poor territories where the promise of development has not arrived and where the social and environmental impacts associated with extractives have [taken] a heavy toll,” Llanos says.

Fracking has already been banned in several countries like Australia, France, Germany, and Spain. Petro says fracking isn’t viable in Colombia because of its environmental impacts, and adds his government plans to accelerate the transition to clean energies.

Mongabay approached Colombia’s Ministry of Mines and Energy for comment but received no response at the date of publication.

Fracking gets at hard-to-reach deposits of oil and gas that would be commercially unviable using conventional drilling. It works by injecting into wells a fluid mix of  steam, hazardous chemicals and sand at high pressure, which opens up cracks (or “fractures”) in the bedrock that allow oil and gas to flow more freely. Colombia has authorized two fracking pilot projects, Platero and Kalé, both in the municipality of Puerto Wilches, in the northeastern department of Santander. Led by ExxonMobil and Ecopetrol, the state oil company, the projects, which also overlap into the Magdalena River Basin, are currently on hold while legislation is being reviewed.

There are also seven other contracts for non-conventional oil and gas extraction, worth a combined $517.4 million, signed between 2013 and 2016 with multinational companies Drummond, ConocoPhillips and Parex Resources. 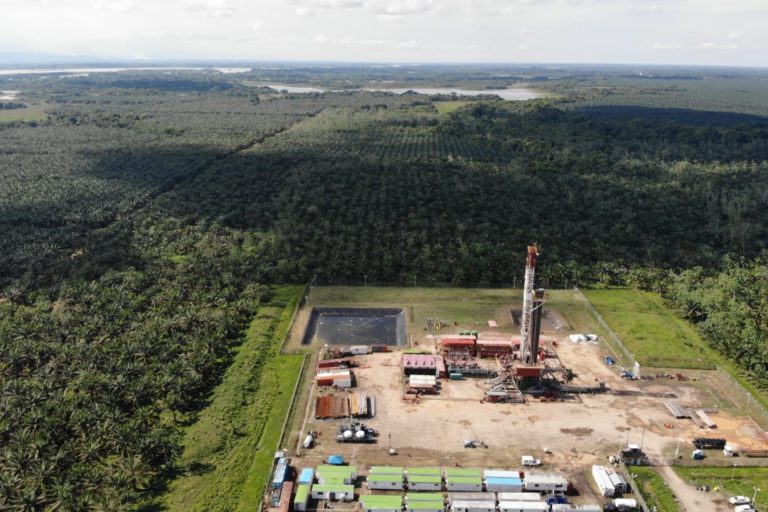 The site of existing “Manatí 1” conventional well where Ecopetrol wants to develop the Platero pilot fracking site, with the Magdalena River seen in the background. Image courtesy of Podion Corporation.

Banning fracking and the exploration and exploitation of non-conventional reservoirs could saddle Colombia with enormous legal bills as the companies that signed contracts could pursue claims through international investor-state dispute settlement (ISDS) mechanisms for lost investment and future profits. This is a legal avenue that has been increasingly used in the last decade.

Researchers say that ISDS cases and the high compensations sought could have a “chilling effect” on national governments’ attempts to advance climate action, “especially in the Global South, where domestic budgets are lower and high dollar judgments would have a proportionately larger impact.”

Though Colombia is a relatively small oil and gas producer, fossil fuels account for 40% of its exports. The previous government of Iván Duque, who succeeded Santos, estimated that fracking could bring the country the equivalent of about $72 billion in additional revenue over the next 30 years. Given the emerging energy crisis triggered by the war in Ukraine and Europe’s push to lessen its energy dependence on Russia, some analysts argue that other oil-producing countries could seize that opportunity to fill the supply gap.

“We have a small window,” says Sergio Cabrales, associate professor of industrial engineering at the University of the Andes. “We have to take advantage of that opportunity because in a couple of decades the world is not going to consume this anymore.”

Cabrales, who is also a development researcher and has worked as a consultant for the oil, gas and energy industry for the last 19 years, tells Mongabay that transitioning too quickly to clean energy could leave Colombia vulnerable and hamper its ability to invest in infrastructure and social goods.

“We need to build schools, harbors and airports,” Cabrales says. “We need water systems, but we need money to install the water systems. Who will pay for that?”

While he acknowledges that fracking has risks, Cabrales says it’s important that society benefits from fracking, but without incurring excessive social and environmental costs.

One of the biggest environmental risks, he says, is oil pipes leaking. Most of the problems with fracking, he says, such as gas leaks, come from badly made tubes. But technological progress, including sensors, has decreased these risks, Cabrales says. “I don’t think you have to quickly say yes or no,” he adds. “Today, you have to have more information to make a much more educated decision.”

Communities push for a ban

Things don’t look quite the same from where the ACLF stands.

“The investment in the pilot projects is not commercial, it’s just to show that it can be done,” Andres Gomez, energy and climate justice researcher for the NGO Censat Agua Viva, tells Mongabay.

Gomez says the pilot projects might not be representative of the actual, bigger-scale operations, so the environmental risks could increase with the scale of the projects.

“You have to look at it in a different perspective in terms of the impacts and the costs, the environmental costs, land costs, associated health problems, impacts on people’s quality of life,” Gomez says.

For the Kalé project alone, each well would require about 48 million liters of water (12.7 million gallons) — about 19 Olympic-size swimming pools — Gomez explains. Ecopetrol points out that if fracking goes ahead, there could be about 13,000 such wells across Colombia

A trained petroleum engineer, Gomez says that with fracking, wells lose about 80% of their yield in the first three years as the sand that’s injected to keep the cracks in the bedrock open start clogging up these fractures. This means new wells need to be continuously drilled, and the only way to make this economically viable would be to use local water sources — in this case, the Magdalena River.

Gomez says it’s both the fracking itself, and the way the wells are made, that cause some of the biggest problems associated with fracking in other countries. 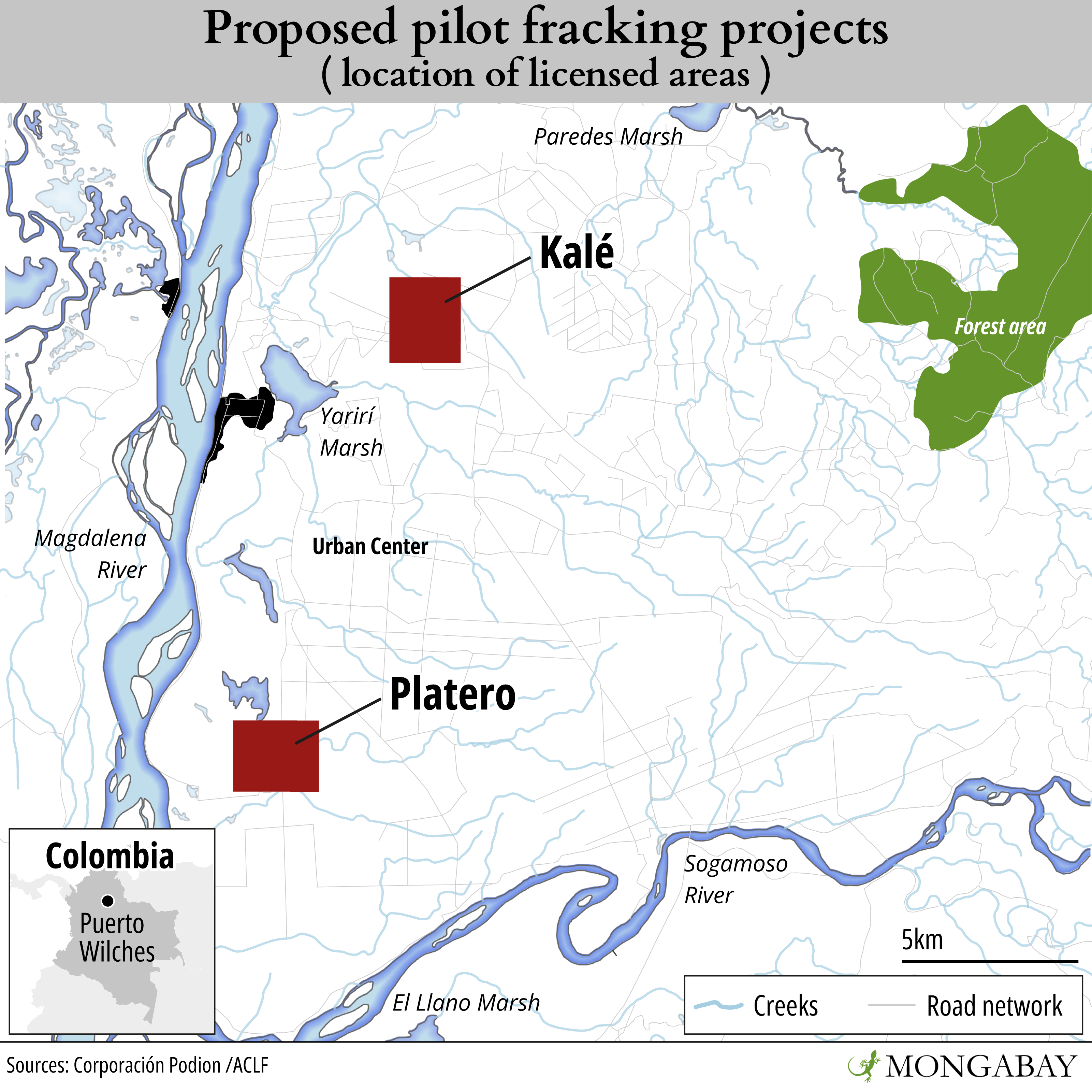 In the U.S., after more than a century of oil and gas drilling and the recent boom and bust of fracking projects, there are millions of abandoned wells leaking pollutants like methane and causing groundwater contamination.

According to a 2011 Colombian government scientific commission report, 85% of the country’s underground waters remain unmapped, so the contamination risks of activities such as fracking remain difficult to measure.

The Magdalena River Basin is an ecosystem with a high level of biodiversity that’s critically threatened by deforestation, pollution, and the drying up of water sources, among factors. While up to 60% of the water used in fracking can be recycled, the rest, contaminated with chemicals, would remain underground.

Fracking can also affect people’s health. The most recent research by the Yale School of Public Health shows that proximity to fracking sites in the U.S. is associated with a higher risk of childhood cancer.  “It’s not a question of making money or not because we’re risking our lives,” Gomez says.

In 2018, the State Council, Colombia’s high court for administrative law issues, passed the first national moratorium on commercial fracking in Latin America. A year later, the same court amended its decision to allow for fracking pilot projects, but kept the commercial ban.

During this period, there’s been a rise in threats and violence against anti-fracking activists in Puerto Wilches, site of the two pilot projects. The ACLF recorded 20 cases in the first four months of 2022, mostly targeting young women. This past September, gunmen killed the leader of a workers’ union allied to the ACLF, though the reason for the killing remains unknown.

Despite the increase in violence, 2020 saw a flurry of government decrees to regulate fracking pilots with public participation, though mostly online due to COVID-19 restrictions.

“The Constitutional Court has been very clear that industries with a high impact on the environment or people’s health have must have strong participation mechanisms,” says Yenny Rodriguez, lawyer at the Interamerican Association for Environmental Defense (AIDA), which provides legal support to the ACLF.

AIDA is currently following two trials for breaches of fundamental constitutional rights, relating to environmental participation and prior consultation.

In February this year, 14 grassroots organizations of youths, fishers, women and workers, with the ACLF’s support, took the first case to the Constitutional Court. In late September, they heard the case would be reviewed.

The court is also expected to decide on the review of a second lawsuit seeking protection of the right to prior consultation of AFROWILCHES, an organization of Afro-Colombian communities that were not consulted on the implementation of the fracking pilot projects in Puerto Wilches.

Waiting for a ban

Rodriguez says that despite the contracts, going ahead with fracking would put Colombia in breach of its international obligations to protect human rights and mitigate the climate crisis. She adds that because of a gap in legislation for citizen participation mechanisms, the government has allowed extractive industries to skip informative meetings of mining and energy projects as part of the process of formal prior consultation.

The anti-fracking bill was presented in parliament on Aug. 15 and still needs to go through another four rounds before it goes up for a vote.

“Colombia can be a pioneer,” says Fernando Cabrera about the government taking an anti-fracking stance. Cabrera coordinates the Southern Petroleum Observatory, an Argentine NGO that monitors that country’s Vaca Muerta (Dead Cow) fracking site, the biggest in Latin America.

Cabrera says that about 90% of Argentina’s energy mix come from fossil fuels. And with soaring oil prices and a battered post-COVID-19 economy, the government has brushed aside talk of a clean energy transition or environmental concerns.

“Once you start with fracking,” Cabrera says, “it’s very difficult to reverse that course.”

Back in Colombia, Amarilys Llanos talks of different ambitions. “In Cesar, we have been talking about giving new meaning to the dreams of younger generations,” she says. “The extractive model was not the solution. We cannot continue on this path through fracking. We can’t allow it here, but we can imagine something different … and the [energy] transition is a good opportunity for that.”