Beef is still coming from protected areas in the Amazon, study shows

Some of the world’s largest beef exporters are still buying cattle that grazed in protected areas of the Amazon rainforest, despite commitments to stop this practice, according to a new study.

The report, published today in the journal Conservation Letters found that millions of cattle grazed in protected areas (PAs) in the Brazilian states of Mato Grosso, Pará and Rondônia between 2013 and 2018.

“Protected areas are the cornerstone of Brazil’s conservation efforts and are arguably the most effective way that we have to conserve forests and the biodiversity inside of them,” Holly Gibbs, a professor at the University of Wisconsin-Madison and the senior author of the study said in a press release. “That meatpackers are continuing to buy from properties in areas that are under strict protection is alarming.”

In Brazil, many meatpacking companies have made public commitments to stop sourcing beef from farms with illegal deforestation or that are not following environmental regulations. Those commitments, known as zero-deforestation cattle agreements, were first signed in 2009. The four largest meatpacking companies (JBS, Bertin, Minerva and Marfrig) also signed agreements to limit buying from protected areas.

Despite those pledges, nearly 1.1 million cattle were bought directly from protected areas and another 2.2 million spent at least a portion of their lives grazing in PAs and were then sent to finishing or “fattening” farms before being sold to meatpackers, according to the study.

To follow cattle from PAs to slaughterhouses, Gibbs and colleagues compiled public records on cattle transit, property boundaries and PA boundaries between 2013 and 2018. Most of the cattle were traced to “sustainable-use” areas, where some grazing is permitted, but nearly 925,000 came from strictly protected areas (20%) and Indigenous territories (8%) where commercial grazing is illegal.

The study period ends in 2018, Gibbs said, because, “at the start of 2019, this critical information became less available.” Brazil’s current President Jair Bolsonaro was elected at the start of 2019. Since his election, the Brazilian Amazon has lost an area of forest larger than Belgium and recorded its highest deforestation rate in 15 years. There has also been a surge in the frequency of fires, which are often set after deforestation to clear the land for cattle ranching and soy farming.

“Protected territories in the Brazilian Amazon have served as shields against advancing deforestation pressures,” Clarissa Gandour, head of policy evaluation and conservation at the NGO Climate Policy Initiative, who was not involved in the research told Mongabay in an email. These territories’ effectiveness in protecting forests, “fundamentally hinges on Brazil’s capacity to enforce environmental law— this has been severely weakened in recent years, posing an enormous threat to forest protection.”

The Bolsonaro administration adopted policies weakening Brazil’s various environmental protection and monitoring agencies and made public records harder to obtain. That lack of transparency surrounding cattle movement has made it difficult for slaughterhouses to monitor their supply chain and account for cattle that spend time in PAs. It has also been much easier for meatpackers to break commitments and escape accountability.

“Lack of animal traceability allows ranchers to use legalized farms to conceal sales of cattle raised in illegal areas through false declarations of origin,” a practice some call “cattle washing,” as Repórter Brasil reported.

JBS, Marfrig, and Frigol, some of the largest meat producers in the world, were found to have purchased cattle from ranches associated with illegal deforestation and modern-day slave labor, according to a September 2019 investigation by Repórter Brasil. The companies blamed the lack of publicly available records.

“There is an appetite among retailers and investors — the parts of the value chain that slaughterhouses are responsive to — for more information about slaughterhouses’ performances, but right now that information is lacking,” said Lisa Rausch, a co-author of the paper and scientist at UW-Madison’s Nelson Institute for Environmental Studies.

Cattle ranching plays an outsized role in the destruction of the Amazon. Around 70% of deforestation in the Amazon has been linked to cattle pastures. More than half of that loss occurred in Mato Grosso, Pará and Rondônia, the states examined in the study, which form the Amazon’s infamous arc of deforestation. Nearly half of the ranches linked to commercial grazing in protected areas have seen deforestation since 2019, according to the study.

“Many slaughterhouses have gotten the message that being associated with deforestation is bad for their business, but they cannot address this issue without increased availability of information about their suppliers,” Rausch said.

“This is further evidence that we need more demand by investment banks, retailers and consumers for improved cattle traceability, transparency and accountability,” Gibbs said.

“The paper’s findings stress the importance of advancing transparency mechanisms throughout the cattle ranching production chain,” Gandour said. “This is critical both for strengthening law enforcement capacity and for enabling accountability of production.”

Some efforts by the public and private sector to monitor indirect suppliers of cattle were underway, the study reported, such as the SeloVerde (Green Seal) tool available in Pará and  Boas Práticas (Good Practices) implemented by the monitoring tool Visipec.

Additionally, the NGO Trase has worked to map the supply chains of commodities such as soy, beef and palm oil from where they are grown to the final buyer, allowing buyers to determine if their goods came from an area with deforestation. 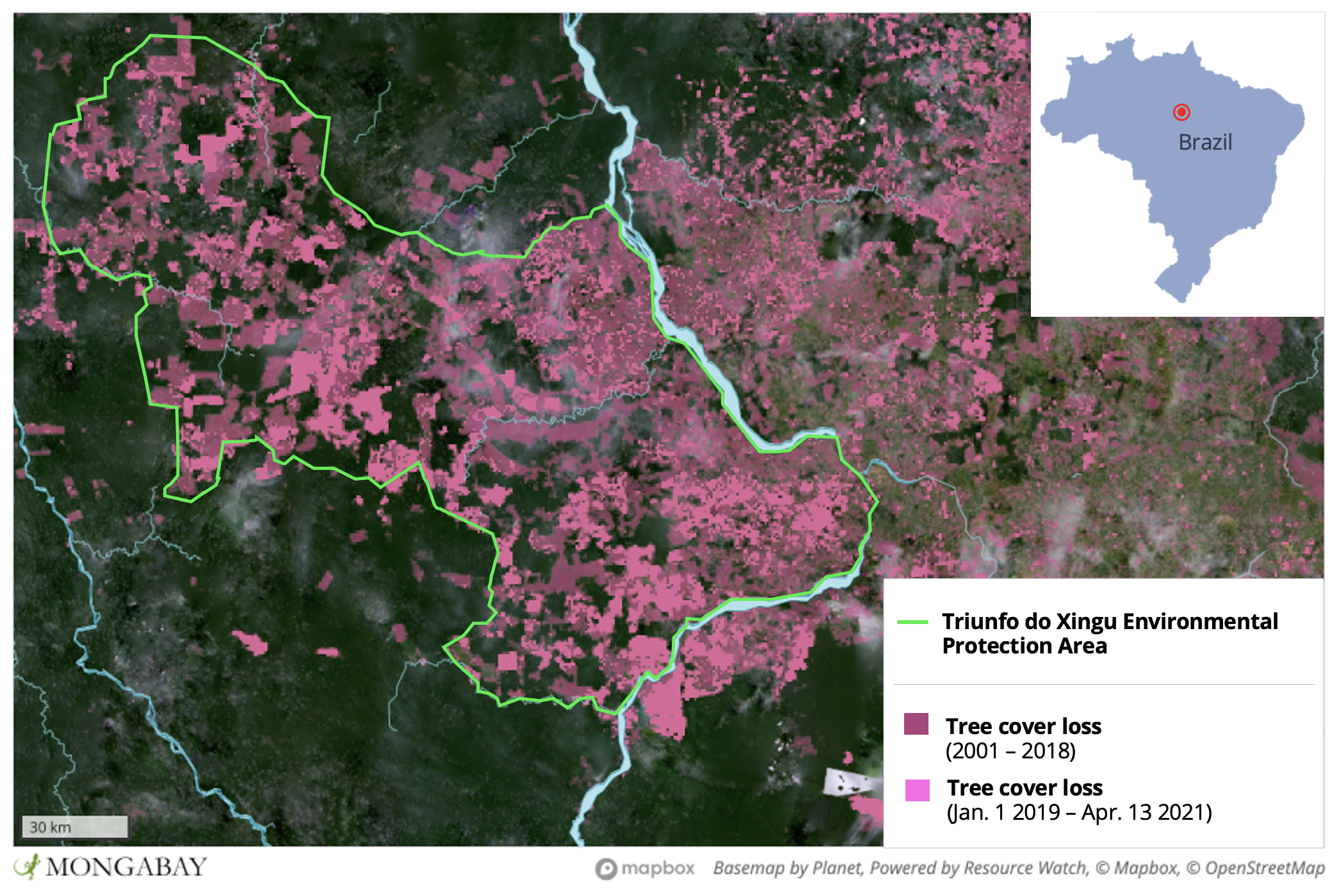 Satellite data from the University of Maryland show much of Triunfo do Xingu has been cleared since 2001.

Almost half of the cattle sold directly from PAs to slaughterhouses and meatpackers came from just a few protected areas, namely the Triunfo do Xingu and Chapada dos Guimarães environmental protection areas in Pará and Mato Grosso states, according to Gibbs and colleagues.

Zeroing in on those areas “highlights key opportunities for policymakers to craft targeted interventions,” the authors wrote, “which can result in quicker and more effective outcomes needed to protect critical biodiversity, reduce carbon emissions, and support regional climate benefits generated by forests.”

Banner image: Cattle ranching is the primary cause of deforestation in the Brazilian Amazon today, with much of the meat exported. Photo by Rhett A. Butler.