Debunking the colonial myth of the ‘African Eden’: Q&A with author Guillaume Blanc

by Malavika Vyawahare on 23 September 2022

As the clamor to protect vast portions of Earth’s lands and waters grows louder to meet upcoming international goals, a newly translated book critically examines the first principles of global conservation in Africa and ways forward to avoid past pitfalls. According to Guillaume Blanc, author of The Invention of Green Colonialism, one of these pitfalls is the idea of an “African Eden” that casts an entire continent as the site of pristine wilderness instead of a region populated and shaped by humans for millennia.

Blanc, who specializes in environmental history at Rennes 2 University in France, lays bare the history and contradictions of the European project to secure and, at the same time, exploit Africa’s land during direct colonial rule. He goes on to show how these contradictions continue to play out into the present. Across the continent, pre- and postcolonialism, people who lived in areas designated as national parks or other conserved areas faced expulsion because they were treated as a threat rather than collaborators in the conservation project.

The scope of the challenges we face — from biodiversity loss to climate change — is global, but that doesn’t mean the solutions must originate from a clique of NGOs or international experts, Blanc says.

Blanc challenges readers not to fall into a conspiratorial mode but rather to be clear-eyed about the past. He proposes a more pronounced and transparent break from conservation’s colonial history. In a phone interview from France with Mongabay’s Malavika Vyawahare, he argues that organizations that evolved out of colonial arrangements for colonial aims must acknowledge and apologize for the harm inflicted, dig deeper when seeking change, and cast a wider net for more meaningful, localized research and solutions.

Invention du Colonialisme Vert was first published in French in 2020. The English translation, by Polity Press, came out in August 2022. Parts of the following interview with Blanc have been translated from French and lightly edited for clarity.

Mongabay: Is the idea of an “African Eden” born out of nostalgia?

Guillaume Blanc: We really need history to understand this. We need to go back to the end of the 19th century when European settlers embarked on the colonial enterprise. They were leaving behind a European landscape deeply transformed by industrialization and urbanization. When they arrived in Africa, they were convinced they would find the nature they lost in Europe.

But settlers did not realize that the ecological transformation they were observing in Africa was their own responsibility. They blamed the African population, saying that it is your practice that destroys nature.

The myth persisted because, around that time, the mass media started to promote the travel narrative. Everyone from Henry Morton Stanley to Nixon was talking about Africa as a big wild garden threatened by its population.

All this continued after colonization because, after colonization, nature started to vanish more and more in Europe and the West. It was again National Geographic, Lonely Planet and the BBC, the Attenborough shows, that made the Western public discover an Africa without boundaries, without societies where there were only savannas, oases and primary forests. The more the destruction was happening in Northern [Hemisphere] countries, the more we wanted to save it in Africa.

Mongabay: Your book documents how international organizations tend to erase or suppress their colonial histories and origins. Is there any particular agency that embodies this?

Guillaume Blanc: We have several examples. Hunting reserves and hunting areas became national parks during the ’30s and the ’40s. After having hunted during all their youth, the very same hunters became repentant butchers. They decided that hunting reserves must become sanctuaries dedicated to nature.

For this, they worked within several organizations. For instance, there was the British Society for the Preservation of the Wild Fauna of the Empire (SPWFE). There was also the International Office of Documentation and Correlation for the Protection of Nature. These two organizations were active as a center for exchanging knowledge and practice about conservation.

It’s not a political statement. It’s just about history. The archives do not lie. The two institutions — SPWFE and the International Office of Documentation and Correlation for the Protection of Nature, along with UNESCO and FAO — decided in 1961 to build a bank that was supposed to help them face what they were calling the Africanization of the nature program. This bank was supposed to help them — and I am quoting from the archive — to send experts to help Africans help themselves. This bank, set up in 1991, was the World Wildlife Fund (WWF).

Mongabay: Many of these actors were present in Kigali, Rwanda, recently for the first Africa Protected Areas Congress in July, where Indigenous and local people also participated as delegates and speakers. Are things changing?

Guillaume Blanc: They say the main purpose of this first meeting in Kigali was to clearly state that conservation needs Indigenous peoples’ involvement. It’s not about fortress conservation like in the ’70s, where they said farmers were useless and reckless. The narrative has changed. The narrative is communities are our priority.

What has not changed is seeing communities as the main danger to conservation. I don’t know how they can continue to formulate the same socially and ecologically absurd argument. You say that you will make the conservation with communities and at the same time say that communities are the danger.

Mongabay: You say with respect to organizations, companies and people: those who are trying to protect are also those who destroy. Doesn’t that logic also apply to Indigenous people and the local communities? Aren’t issues as complex and complicated at their end too?

Guillaume Bland: It’s important first to acknowledge that international conservationists do not protect, but it’s also important not to fall into the trap of rarefying Indigenous people. It would be a sort of reverse racism to say because they are Indigenous, they protect. For me, what is important is to recognize that a global solution is impossible because every territory will be different.

If we really want to protect, we could say, in this national park in the Ethiopian highlands, what are the modes of exploitation of land? What kind of seeds do they use? When they shift cultivation during the season, how can we improve the movement of the cattle? Or, what kind of forest do they have? For example, the Sahel in West Africa is an arid land. Here, we know that flora needs to be grazed if we want it to regenerate.

The only solution considered within national parks is to clear them of people. It’s just a way of not addressing the problem.

Mongabay: Is the globalized market for commodities the main culprit for this destruction?

Guillaume Blanc: If we talk about the global ecological crisis, whether we are from the right or the left, we can all agree that capitalism is destroying the planet in Africa, Europe, in America.

The people [local communities] being criminalized . We think by preventing them from cultivating the land, we will save the planet. [They are the ones] who walk barefoot, those who don’t have electricity. They do not buy new clothes. They do not have smartphones or computers.

Mongabay: Is there a place for international experts in conservation?

Guillaume Blanc: Yes, the problem is a global one. But the solution is also formulated by a global community. This is a problem because this community is not a global one, it is an expert one. They are convinced they have the universal truths. They’re convinced they can go above the limits of politics. But they need to know the societies they are dealing with.

International expertise is a business, and they do not do it well. Even if it’s not politically correct to say this, international experts don’t know anything about the society they’re working in. A professional expert, by definition, will give the same advice, the same recommendations in 10 countries. How can one person know 10 societies very well?

For example, even the most basic condition of speaking the same language. UNESCO will never send an Ethiopian expert to a French national park, saying even if you do not speak the same language, do not worry, it will work.

Mongabay: How are African governments navigating the international conservation landscape? Are they safeguarding the interests of the people they represent?

Guillaume Blanc: These states had no choice in dealing with the myth of the African Eden.

In Ethiopia, during the ’90s, the government refused to do what UNESCO told them to do in Simien National Park: move people out of the park and not build a road. Because UNESCO is a U.N. agency, UNESCO asked another U.N. agency, the United Nations Development Programme (UNDP), to stop funding to build other infrastructure in the region. So, they do not have a choice. To benefit from international aid, they must comply with international conservation criteria.

But, when appropriating this myth, they know how to deal with it and use it to serve their interests. The national parks haven’t been created where they [are] by chance. Omo National Park was created in Ethiopia near the Kenyan border to control the population during Emperor Haile Selassie’s reign. Simien National Park has also been created to control people resistant to central power. This is the case everywhere in Europe and also everywhere in Africa.

The point of my book is to say that there is a strong alliance between Western experts and African leaders. But usually, the loser is always the same: the African shepherd and farmer. 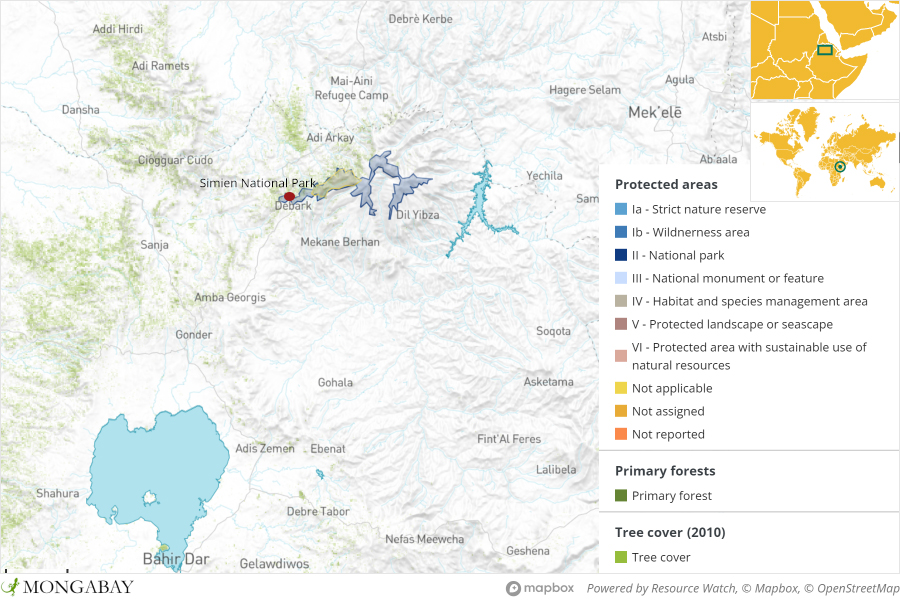 Mongabay: How can we reconcile these incongruences and move forward?

Guillaume Blanc: There are two ways of seeing this: sometimes, unfortunately, we see it in mainstream media and social media. They are saying: they [the companies and international nonprofits) are liars. It’s just about greenwashing.

I think there is a second way, which may be more relevant for us to see that the one who destroys is also the one who protects. You see that IUCN and WWF are funded by big oil corporations, Exxon, Nutella, and many companies that destroy nature. How can this work when the solution comes from the one who creates the problem?

If a tourist wants to protect a national park, the thing to do is stop taking the plane and buying all the hiking equipment. The very fact of going to a national park is the equivalent of destroying nature.

But it’s not something we are ready to hear. Because it means it’s our own way of life that must change. The IUCN, for me, is here to make us feel more comfortable thinking we are doing something about the ecological crisis.

Mongabay: Does the solution lie in turning inward? For example, should international organizations focus on countries where they are based or where the funding and “international experts” are coming from?

Guillaume Blanc: We should ask why UNESCO, IUCN and WWF fail to support farmers and shepherds in Africa, whom they protect in European national parks. The answer is that African global conservation is deeply rooted in the colonial id, according to which Africa is a pristine Eden threatened by its inhabitants.

As an ecologist, I would like UNESCO, IUCN and WWF to take the lead on this to say we made a mistake. They should first conduct localized studies about the environment and try understanding the interaction between biodiversity and local communities. Once we do this, we can understand how it works and identify local solutions.

Cleaning up our own backyard: Racism, speciesism and the environmental crises (commentary)

Banner image: A cattle herder in a cattle camp in South Sudan. Image by Rod Waddington via Flickr (CC BY-SA 2.0).