MEDAN, Indonesia — On a recent morning in Kampung Nelayan, a village on the northeastern coast of the island of Sumatra, fisherman Heri Gunawan returned home frustrated and dissatisfied.

Heri uses traditional gear, a flashlight, a bucket and a plank to hunt for octopus crawling along the shoreline. But the increasing severity of tidal flooding has made his job much more difficult.

“The catch of fish from the sea is very little nowadays,” Heri, 31, told Mongabay. “The impact of this tidal flooding has made my income drop drastically, as much as 30%.”

Heri isn’t alone. As climate change causes sea levels to rise, Indonesia, an archipelagic country of 270 million people, stands to be one of the worst affected by tidal flooding, which is when low-lying coastal areas are temporarily inundated with seawater. The phenomenon is exacerbated by erosion and the subsidence, or sinking, of coastal lands.

As many of 199 of Indonesia’s 514 cities and districts could be affected by tidal flooding by 2050, according to a recent analysis by Kompas, Indonesia’s biggest newspaper, based on data from the nonprofit Climate Central.

The Indonesian Traditional Fishermen’s Association, known as the KNTI, reported in March that 15,820 fishers across the country had been affected by tidal flooding in the past week.

Kampung Nelayan is a short boat ride from the port of Belawan in Medan, the biggest city in Sumatra. The island’s east coast, along with the north coast of Java Island, are the areas most vulnerable to tidal flooding, according to Widodo Pranowo, principal researcher at the Center for Climate and Atmospheric Research (PRIMA) at the National Research and Innovation Agency (BRIN).

The unique geological conditions in Belawan have made the problem particularly acute. The area’s land, the result of millions of years of alluvial deposits from ancient rivers and nearby Lake Toba, is still relatively young on a geological scale, Widodo said, so it hasn’t been completely compacted, rendering it vulnerable to subsidence.

“So when there is an increase in the load on the building above it, the land in the Belawan area slowly descends,” he said.

The clearing of mangrove forests to make way for oil palm plantations along the coast has also contributed to Belawan’s tidal flooding, according to Onrizal Onrizal, a forestry researcher from the University of North Sumatra.

Some 60% of the mangroves on the east coast of North Sumatra province were damaged between 1977 and 2006, according to Onrizal’s research, with the destruction continuing into the present day. As a result, two-thirds of the area’s fish species have become harder to catch.

“If the mangroves are damaged, it will have an impact on the loss of aquatic biota there,” he said. 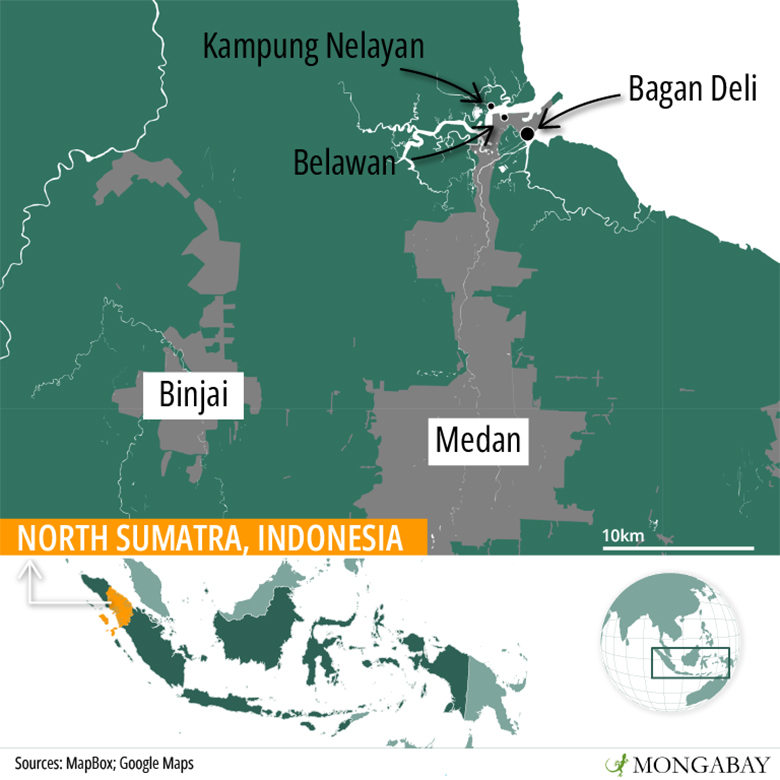 Belawan residents say the flooding is getting worse.

Tengku Ahmad Saman, 44, has lived in Bagan Deli, a village in Belawan, since he was a child. Back then, he said, the village would experience tidal flooding that was only 5 centimeters (2 inches) high roughly every five years.

“But since 2014,” he said, “the intensity has increased to up to five times a year, and now it happens almost every month with a height of up to 2.7 meters,” or nearly 9 feet.

Like other residents, Ahmad has built a low wall in front of his house to keep the seawater out, and installed a pipe to channel away the water when it does enter.

Heri, the traditional fisherman, said the tidal flooding is hurting his bottom line.

To make extra money, he teaches the children to read the Quran at the only school in the village.

“It’s getting more and more difficult to live as a fisherman, especially a traditional fisherman like me,” he said.

Heri sells his daily catch to Udin Limbong, 54, who buys cuttlefish, clams, shrimp and snails in Kampung Nelayan and sells them in Tanjung Balai, a port city and export hub farther down the coast.

Udin said he used to collect at least 700 kg (1,540 lbs) of cuttlefish twice a day, but now he gets no more than 150 kg (330 lbs) per day. He has had to stop selling to big exporters and prioritize the local market.

“Every day, fewer and fewer fishermen come to sell their catch, because the results are no longer sufficient for the needs of their families,” Udin told Mongabay.

Nurhidayah said that fewer fishers are going out to sea, saying their catch doesn’t justify the expenditure. Today, some report bringing in only a few ounces. In the past, fishers were delivering an average of 2-3 kg (4.4-6.6 lbs) of seafood to traders at a time, two times daily, she said. That would earn them 200,000-300,000 rupiah ($13.40-$20) in a day; now, on average, they only get tens of thousands of rupiah.

On a recent afternoon, about an hour before the tidal flood occurred, Udin transported the octopus he’d collected in the morning to Belawan. He was worried the tidal flood would hit, thus hampering the delivery of the fish to the collection point in Belawan.

Rahmad, 38, a fish collector at Bagan Deli in Belawan, has also felt the impact of tidal floods. He says it often results in delays in the distribution of the fish he collects from the fishers.

Ideally the catches from each fisher should be distributed no later than the afternoon. But because of the tidal flood, the transportation route becomes inundated and impassable. When distribution is late, collectors like Rahmad have to store the catch overnight, for which they have to buy ice to keep the fish fresh.

The seafood that Rahmad collects from the fishers, such as octopus, squid and crabs, gets sold on to big collectors and big fish agents from Medan. Any delay in distribution reduces the freshness of the fish and thus pushes the price down.

“The low price and the additional cost of ice sometimes result in me not getting any profit, even experiencing a loss when the fish is priced cheaper by buyers,” Rahmad said.

To keep his business afloat, Rahmad needs to stay ahead of the increasingly unpredictable climate. When he knows the tidal flood is expected to occur, he tries to deliver the fish he’s collected before it hits.

“I have to try to be faster than the tidal flood — if I go slower then I will lose,” he said.

“If the water rises first, I can’t do anything here, because the transportation route has been blocked by rising sea levels.”

Heri, the fisher, said he hopes the government can find a solution, and that efforts will be made to restore peatlands previously planted with mangroves.

Industrial waste and garbage are also carried by rising seas and pollute the coast.

“Traditional fishermen like me can only feel the impact, even if I protest, the government doesn’t necessarily want to listen,” Heri said.

Last October, hundreds of Belawan residents staged a protest demanding that the mayor of Medan address the tidal flooding. They blamed it on the conversion of mangroves into oil palm estates. The Medan government has responded and reportedly plans to build a seawall this year.

To overcome mangrove degradation nationally, in 2020 the Indonesian government established the Peat and Mangrove Restoration Agency, known as the BRGM. The agency targets the rehabilitation of 600,000 hectares (1.48 million acres) of mangrove forest in nine provinces, including 21,370 hectares (52,800 acres) in North Sumatra.

The program will not only be implemented in mangrove forest areas but also in other formerly forested areas that have been lost and damaged due to conversion, including for oil palms.

Heri said he hopes the government will pay attention to the continued loss of mangroves for oil palms in recent years. The problem of tidal flooding, he said, is getting more complicated because an increasing number of private companies are planting oil palms in coastal areas that were formerly mangrove forests.

“We can only live with a fate that gets worse day by day,” he said. “What else can we do?”

Banner image: Fishermen haul their catch from the boat. Image by Tonggo Simangunsong for Mongabay.