As it sets, the sun lights up the waters of Lake Catemaco before disappearing behind the shoulder of a rainforest-covered volcano in Mexico’s Los Tuxtlas region. The waterfront is filled with tourists enjoying the final rays of the day. Many of them might have come here to visit the “sorcerers” who perform cleansings and healings in what’s often called the country’s mythical land, tierra mitica. This southern part of the state of Veracruz is where Mesoamerica’s first advanced civilization, known as the Olmecs, emerged sometime around 1200 B.C.

“The name Olmec was given to these people much later by the Aztecs, who still considered the region sacred and relied on it for rubber and other goods,” says Julio Gómez Hernández, an anthropologist at Mexico’s National School of Anthropology and History (ENAH) who has worked in Los Tuxtlas for more than 25 years.

Los Tuxtlas, physically defined by a small but tight range of more than 300 volcanic peaks hugging Mexico’s Atlantic coast, with Lake Catemaco at its center, is also the northernmost limit of tropical rainforests in the Americas. It’s home to more than 2,600 species of plants and more than 800 species of vertebrates, and is a major winter migratory haven for waterfowl from across the continent. That makes it a place of high cultural and historical value and a natural area of great biological and hydrological importance, according to Hernández.

In 1998, the Mexican government declared Los Tuxtlas a protected national reserve, and in 2006 UNESCO designated the protected area a biosphere reserve, partly to stop the accelerated deforestation and destruction affecting it. But these measures only helped slow down the deforestation, not end it, according to a 2013 study by researchers at the National Autonomous University of Mexico (UNAM), which runs a research station and a 600-hectare (1,480-acre) forest reserve here. The study found the rate of forest loss remained high enough that, by 2011, the only intact pristine rainforests remained on the cones of Santa Maria and San Martin, the region’s largest volcanos.

“Today, only 1.5 to 10% of the original forest remains at most,” Hernández tells Mongabay. He adds that Los Tuxtlas Biosphere Reserve, which contains nine different ecosystems, including lowland jungle, cloud forests and old-growth mangroves, is experiencing an annual deforestation rate of 4.2% — more than double that of neighboring departments like Chiapas.

“Sadly, the destruction of the forest implies the near extinction of several species of fauna and flora, since they depend on each other,” Hernández says. Several rainforest species, including the scarlet macaw (Ara macao) and the white-lipped peccary (Tayassu pecari), both important for seed dispersal and forest health, had already gone extinct in Los Tuxtlas by the end of the 20th century. Geoffroy’s spider monkeys (Ateles geoffroyi), which thrive only in mature tropical forests, are now found only on one of the biosphere’s volcanic cones, unable to move to other areas because of the lack of wildlife corridors. According to the organization One Earth, if the current rates of deforestation continue, Los Tuxtlas will experience a complete loss of native biodiversity.

Hernández cites several factors as responsible for this fast-paced destruction, including large-scale cattle ranching, oil extraction, drug trafficking, migrant smuggling, which often leads to clearing forests for camps, and hunting of endangered species. Ultimately though, he says, the problem is a ”crisis of modernity” rooted in a lack of respect for the region from both politicians and businesses. This stands in stark contrast with the milpa-style agriculture systems used for millennia by the Indigenous people here, which promotes biodiversity and benefits nature.

“The Los Tuxtlas region was a kind of Garden of Eden for the early Mesoamerican societies,” says Edith Carrera, a biologist from the University of Veracruz who manages La Otra Opcion (The Other Option), a private reserve and regenerative agroforestry project that was founded in 2007 on a former cattle ranch spanning 136 hectares (336 acres), including 50 hectares (123 acres) of pristine old-growth rainforest.

Although the rest of the site had been cleared for pasture, La Otra Opcion reforested another 75 hectares (185 acres) with more than 100,000 trees of 55 different native species in an attempt to further extend the borders of the connected forest reserve.

“This is why we call it regeneration, since it is not a reforestation for commercial purposes, but rather for food and shelter for wildlife,” Carrera says. 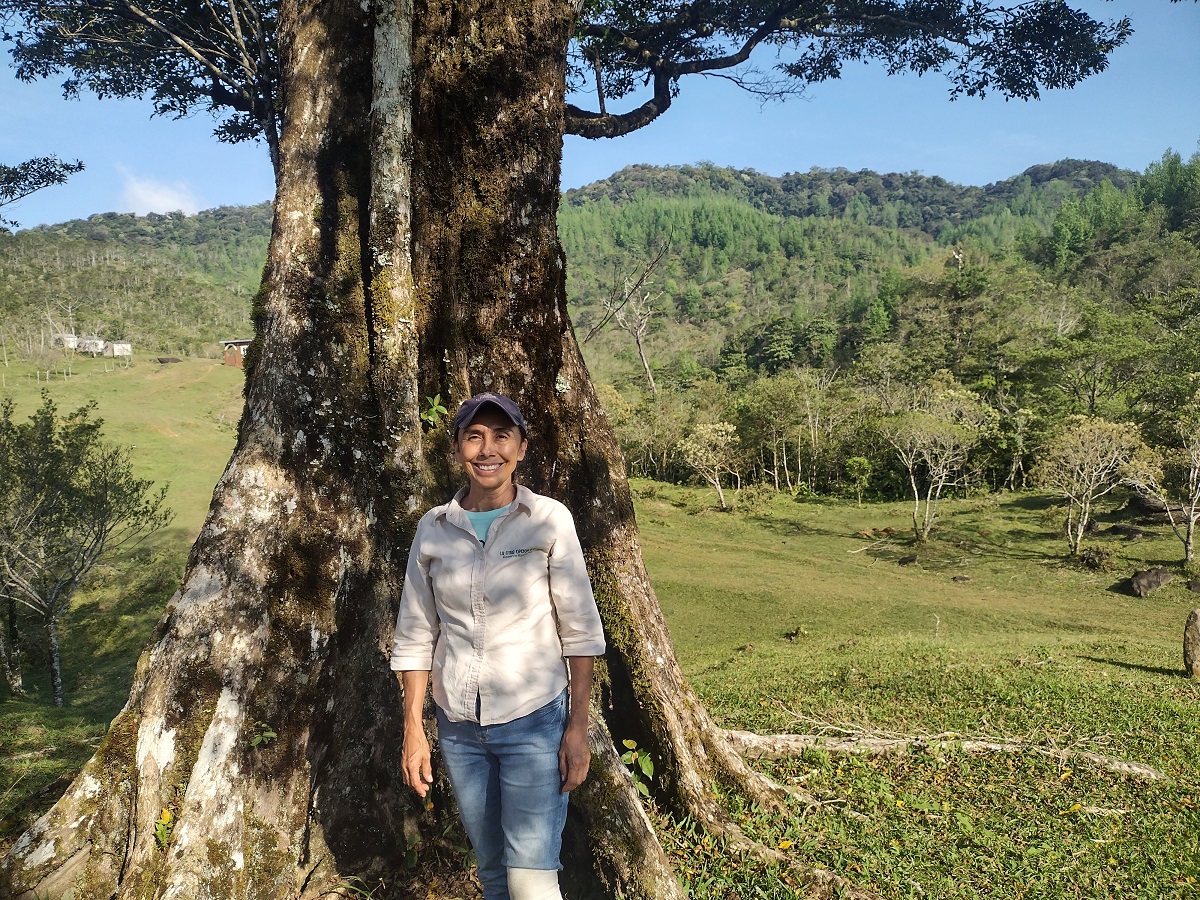 The regeneration efforts by La Otra Opcion go beyond just planting trees. In 2014, the reserve released back into the rainforest a group of scarlet macaws, reintroducing the species into the ecosystem of Los Tuxtlas. It’s currently raising for release white-lipped peccaries and hocofaisáns or great curassows (Crax rubra), a native rainforest pheasant species hunted almost to extinction in the area.

“Our goal with the hocofaisáns is to manage them in captivity so that communities see that as a legal alternative to poaching of wild specimens,” Carerra says, explaining that one of the core goals of La Otra Opcion, and the inspiration behind its name, is to pioneer new ways in which local farmers can move from destructive, extractive practices to regenerative, agroecological ones.

On what was previously cattle pasture, the reserve has planted 15 hectares (37 acres) of native pepper trees, Pimenta dioica, and started raising a Colombian cow breed, Romosinuano, to feed on the orchard’s weeds and fertilize the soils with manure in a regenerative agriculture model that locals can easily replicate.

Planting fishtail palm (Chamaedorea ernesti-augusti), a shade-loving species that thrives on the forest floor under the trees, is another agroforestry initiative at La Otra Opcion. Sought by the global floral arrangement industry, the palm provides farmers with an incentive to preserve the rainforest, as they can sell its leaves via a local company onto the international market.

“Cultivating plantation palm is already a major source of income for several communities living in the southern part of the biosphere reserve,” Carerra says. She adds that combining regenerative agriculture, agroforestry and ecotourism at the community level, and not just in private reserves, will be key to protecting the area from the threats of development and to create a sustainable future.

Restoring the forest and connections with nature

One example is the community-run rainforest preserve of the nearby pueblo or settlement of Benito Juarez. The preserve is a 42-hectare (104-acre) swath of virgin tropical rainforest dotted with waterfalls, home to numerous tropical bird species and mammals like jaguarundis, ocelots and armadillos, which has also become a tourist attraction.

“Fifty years ago, the Los Tuxtlas region was all deep jungle, and I have watched the deforestation with my own eyes since I was young,” says Arnulfo Ksa, leader of the Benito Juarez community and one of the reserve’s tour guides. Ksa says the pueblo’s preserve was set aside as common property after a 1994 town vote and was meant to protect the forest and several pristine water sources from encroaching coffee plantations and cattle ranching.

Ksa says the preserve now receives more than 3,000 visitors annually and is a significant source of income for the community, particularly as an alternative to raising cattle.

It has also motivated the community to preserve, and in some cases return to, ancestral knowledge.

“I and the other tour guides and caretakers of the preserve have had to learn about all the different birds, animals and plant species that live in the rainforest, so we can explain them to visitors,” Ksa says. 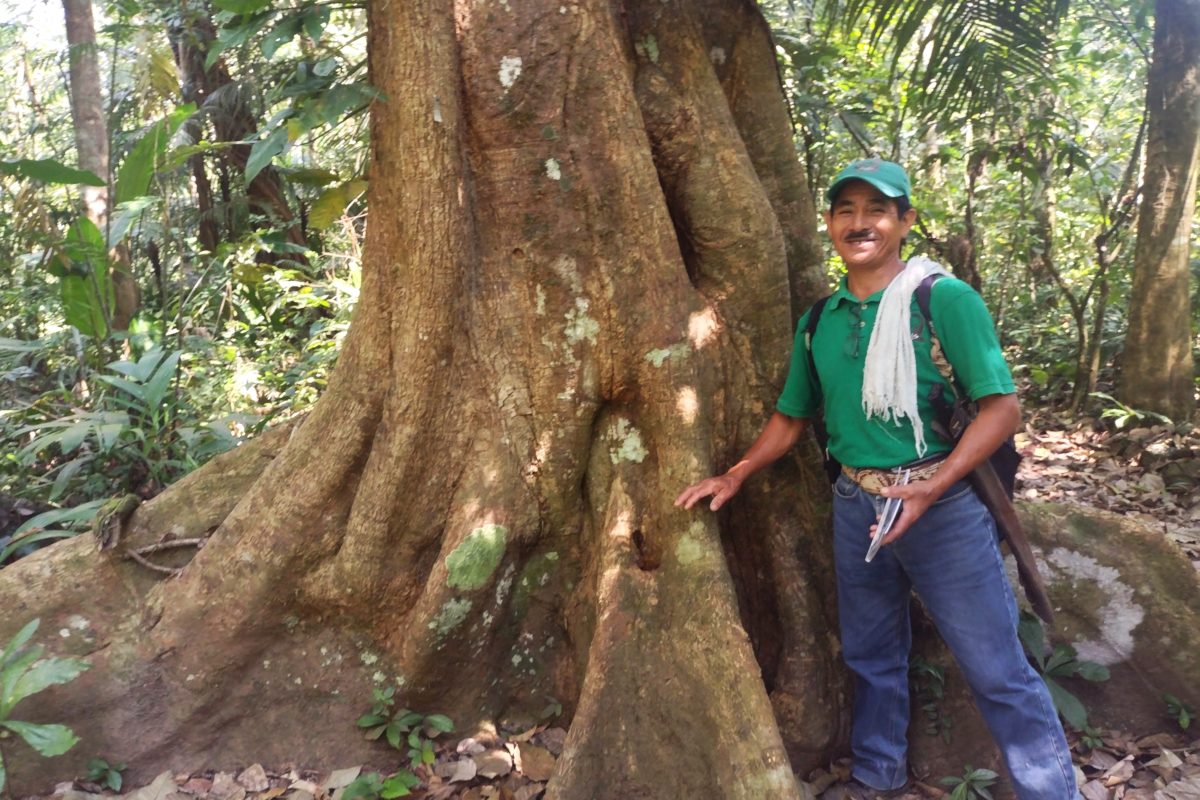 “So we ourselves have become more connected to the trees and the plants, and there has been a revival of traditional medicine based on our local plants. We are now hoping to pass on this traditional but almost forgotten knowledge to the younger generations so that they can live better lives, not just in looking where to make money but knowing what our natural environment provides as well.”

According to Ksa, the destruction of Los Tuxtlas often gets blamed on campesino Indigenous communities like Benito Juarez, overlooking the real problems.

“Yes, we need land to grow our food. But from my point of view the real issue, the big problem, are the politicians, and those with lots of money buying large tracts of land as investments” he says. He points out that larger cattle ranches tend to clear the land completely, which does much more damage than the small traditional lots that the campesinos cultivate, which maintain much of the tree cover and provide habitat for wildlife.

Hernández says the real ecological crisis facing Los Tuxtlas will not be solved only by technological or economic means, but by a change in our “conception of the world” as well.

“Traditional cultures, which are actually islands of pre-modernity in today’s world, contain many of the keys to overcoming the world’s crises and are like living alternatives to today’s modern destructive culture,” he says. He adds traditional cultures provide us with an actual model for “regenerating” not just the forest, but civilization itself — a process that goes far beyond just decolonization and that can result in “a better and fairer world.”

“It’s a matter of falling back in love with nature,” Ksa says. “That’s the real return to our roots.”  For anyone born and raised in an earthly paradise Los Tuxtlas, he says, there’s no other desire but to spend their life guarding and protecting it.

“The damage to the area has been fast and drastic, but at the same time there are people who are turning their attention fully to the protection of this natural wonder that we live in,” Ksa says. “We are creating more and more community organizations devoted to cultivating an environmentalist mentality, so that we can pass on this beautiful place as a living inheritance to future generations.”