PREK TABAEK, Cambodia — The roots of the forests surrounding Cambodia’s Tonle Sap lake spend half the year submerged in water. But in the past five years, they’ve been catching fire in the arid heat of the dry season. The government has rolled out plans to respond to these fires, as the weather in Cambodia’s rice bowl region is thwarting the usual pattern.

More recently, Cambodia has received an unusually high volume of rain since December, generally the start of the dry season, which spans from December to May. Ouk Vibol, director of the Agriculture Ministry’s Department of Fisheries Conservation, said that this prevented forest fires from spreading across the flooded forests.

Data from NASA visualized on Global Forest Watch showed there were only two high-confidence fire alerts reported in the forested area around Tonle Sap between April 1 and July 1, 2022. In comparison, NASA recorded 45 such alerts during the same period in 2021.

The fires hit the fields around Chum Van’s wooden house every year prior to 2022, according to the 56-year-old fisher who lives in a small village along the Sangker River in Battambang province’s Ek Phnom district.

“I’m not sure what causes the fires; it seems like villagers go through the forests, and they have cigarettes,” Van said.

He added that some of the community’s livelihood activities — clearing land, smoking bees out of hives to harvest honey — could also contribute. But he said that while the fires sometimes hit the forests, most tree loss is caused by people rather than fires.

“When there’s a fire, it can last for seven days on, until the rain starts,” he said. The biggest fires generally happened after the Cambodian New Year holiday in April, he added. 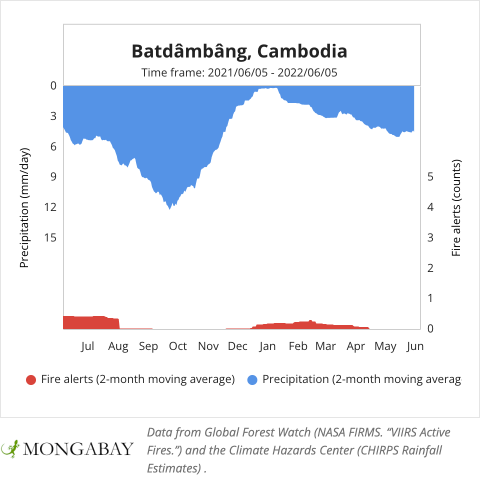 Cambodia’s biggest holiday is supposed to signal the end of the rice harvesting season, before the rainy season begins, but temperatures have escalated after the holiday in recent years. After the country recorded its hottest month on record in 2016, fires tore holes through some of the lake’s densest flooded forests inside Battambang’s Prek Toal Wildlife Sanctuary.

Residents in Siem Reap province, along the border with Battambang, also reportedly witnessed hectares of flooded forest in flames in 2019.

Rob Tizard, lead for the Tonle Sap project at the Wildlife Conservation Society’s Cambodia office, told Mongabay that flooded forests are by nature not likely to catch fire in the way that they do in drier forests, like in Cambodia’s northern plains landscape. But these are surrounded by grassland, which can go up like tinder, and by residents who have traditionally burned their fields to clear debris and regenerate their crop fields.

“While the flooded forest is usually moist and not a big issue for fires, the grasslands have always had a natural fire system that reduce grasses, and people have been burning that grass to make it better for their cows to get fresh sprouts to eat,” Tizard said. “When you move even further into the dry deciduous dipterocarp forest, that’s always on fire, or a lot more.”

This year’s heavy rain, while a welcome respite, isn’t expected to last; the United Nations Development Programme reports that temperatures are rising, and floods and droughts are expected to worsen due to climate change. To mitigate future threats, the Department of Fisheries Conservation is rolling out provincial-level plans to respond to forest fires in the floodplain. Vibol said three of the Tonle Sap province governors — in Battambang, Kampong Thom and Siem Reap — have signed onto fire management plans, and the other three provincial governors were expected to sign their own specific plans in the near future.

Much of the plan involves education, with Vibol saying the key to stopping fires is behavior change.

“Up to 90% of fires are from human activities and human actions,” Vibol said, naming agricultural burns and discarded cigarettes as common culprits. “Very little happens by the natural climate.”

The plan for Battambang involves recruiting volunteer firefighting teams in addition to general flooded forest patrols, and equipping them with pumps, hoses, first-aid kits and other technology. The province also plans to conduct training, build watchtowers over time, and restore lost flooded forest, with a budget of $886,205 over five years.

Residents in Pursat province’s Kandieng district told Mongabay that their village, Prek Trabaek, had a pump that the residents bought together to fight fires in the fields and grasslands. However, they haven’t needed the equipment so far in 2022.

In Battambang province, Sok Mom, a 50-year-old sundry shop owner, said her community wasn’t prepared for the fires she witnessed in the past, describing them as “out of control” in the rice fields around her shop in Bak Prea village.

When reporters met Mom, her home was one of two occupied buildings on her side of the narrow Sangker River that snakes into the Tonle Sap lake, with a few other residents reachable by boat on the opposite riverbank.

Dozens of families used to live in this area, farming rice and fishing in the peak seasons, before their newly built primary school closed shortly before the COVID-19 pandemic due to the lack of teachers. When the government cracked down on farming and fishing in the Tonle Sap protected area in 2021, most of the other families left.

But Mom said that even when the village was full of life, the authorities didn’t attempt to control the fires.

“They’re very scary,” she said. “In the past, sometimes they were like bomb explosions.”

Tonle Sap’s water level has been dropping for years, according to a dry-season report by the multicountry environmental agency the Mekong River Commission. The lake’s volume in January 2021 was a little over a third of the average volume charted over 22 years, while the seasonal reverse flow of the Tonle Sap river and lake system — caused by swelling of the Mekong River to the south, which forces the water to switch direction and flow northward into the lake — was just 44% of its average flow rate.

Despite this year’s unseasonable rain, Tizard from WCS noted that the lake has already been demonstrating a shortened flooding period — when Tonle Sap fills with ice melt from the mountainous regions in China along the Mekong/Lancang River — and lower water levels.

Because the Mekong River Delta system formed about 6,000 years ago, with water spilling into the lower-elevation area that became Tonle Sap, Tizard said this was a relatively young lake and could be prone to getting smaller as global temperatures continue to increase.

Tizard said he can’t predict the degree to which that could happen, but noted that the shrinking water levels would certainly impact the ecology of the Tonle Sap region, and also how humans react in response.

“Definitely a smaller lake means intensified agriculture,” he said. “I think the flooded forests will continue to be fine too, it’s not going to die and disappear. But the drier it is, the pressures from around the lake will close in, once it’s drier you have more fires.”