RINCON VITINA, Colombia — In this small Indigenous reserve, or resguardo, in the Colombian department of Guainía, people tend to their cassava, plantain and pineapple crops, raise ornamental fish, and weave objects from the chiqui chiqui palm. Agriculture makes up the core of their livelihood, and for centuries the Indigenous community here has governed and protected the land, although their status remained informal to the state. Now, Rincon Vitina and other communities in the neighboring Amazonian departments of Amazonas and Vaupés are at last getting closer to fully governing themselves.

Four years after Colombia’s government passed a law to formally recognize Indigenous governing structures in the three departments and give them financial autonomy, Guainía, Amazonas and Vaupés will soon be home to Indigenous territorial entities, or ITEs. In an area roughly three times the size of the Netherlands, the 14 proposed ITEs are home to 43 Indigenous peoples speaking 40 languages, representing some of the most culturally diverse parts of Colombia.  An ITE is an administrative unit similar to a municipality, but whose functioning is more aligned with how Indigenous communities govern and manage their land and the environment. As part of an ITE, Indigenous communities also receive direct funding from the national government, which allows them to govern themselves fully. 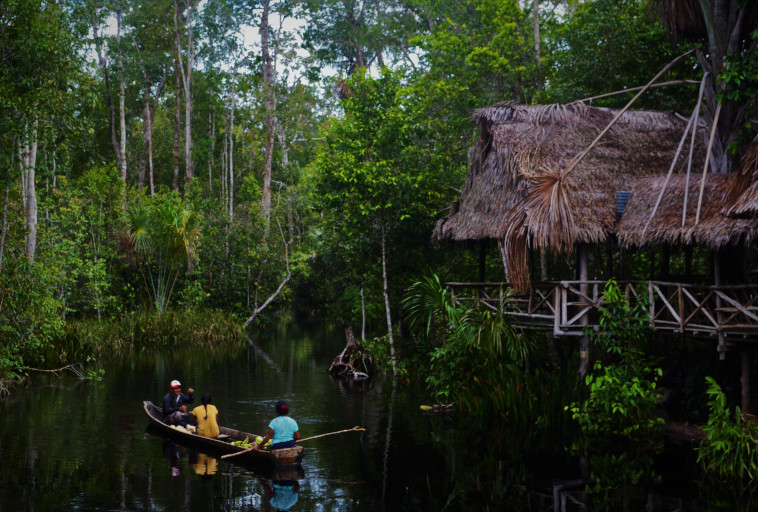 A man paddles down a waterway in the Rincon Vitina community in a traditional boat made from a single tree trunk. Photo: Dimitri Selibas

In 1991, Colombia revised its Constitution, recognizing for the first time the country’s ethnic and cultural diversity and the need to formalize Indigenous lands. But since then, about 37% of Colombia’s Amazon has stayed in a legal vacuum, with Indigenous lands lacking administrative status. Only in 2018 did the government pass regulation, Decree 632, which legally enabled Indigenous communities in the eastern Amazon to create ITEs on non-municipalized land.

Last year, a U.N. report recognized Indigenous and tribal communities in Latin America and the Caribbean as the best guardians of forests in the region. Implementing Decree 632 could mean an enormous boost for conserving the environment and Indigenous culture in these territories, which cover more than 10 million hectares (25 million acres) of almost entirely intact native forest.

“We have our own regulations, and our culture and way to preserve biodiversity are a bit different than the state’s, our politics are a bit different,” says Javier Gutierrez Camico, part of the Kankuamo people and legal representative for the Río Atabapo-Inírida Reserve in Guainía department. “So that is why it is important for us to govern ourselves as Indigenous peoples, according to our vision and our culture, thanks to which we have been protecting everything that we see today.”

The communities want tourism to make up an important part of their economies, Camico says, and being under an ITE would help. In Rincon Vitina, visitors can stay in a maloca, an ancestral long house used by many Indigenous peoples in the Amazon, and learn about the forest, fish, medicinal plants, and go bird-watching.
Yet so far, the national government has repeatedly blocked the creation of ITEs.

The battle to be registered

In September 2021, Colombia’s Constitutional Court made possible the first implementing phase of Decree 632, requiring the government to register the applications of the 14 territories.

Although the state complied, this process took almost two years instead of the 45 days prescribed by the law, says Juan Carlos Preciado, legal counsel for Gaia Amazonas, an NGO that has worked for more than 30 years with Indigenous communities in Colombia’s eastern Amazon for the recognition of their rights, territories and local governance systems.

Gaia Amazonas helped the Indigenous communities with the legal procedures that ultimately led to the Constitutional Court ruling, Preciado tells Mongabay. The court, according to Preciado, ruled that the government had created unnecessary administrative bottlenecks preventing communities from exercising their rights.

By contrast, the government has been much quicker to create new municipalities in the same three departments, such as Barrancominas, which in 2019 became Colombia’s newest municipality, after a two-day process fraught with irregularities. According to Preciado, interest in the departments’ rich natural resources such as gold is partly behind the government’s rush.

“This is pure colonialism, pure racism,” Preciado says, adding that creating municipalities serves the government’s idea of development, one revolving around resource exploitation and land use change, and going against Indigenous communities’ interests by giving more power to local politicians and their inner circles.

Javier Eliécer Zapata, the former governor of Guainía, who oversaw the establishment of Barrancominas as a municipality, was recently jailed alongside his predecessor, Óscar Rodríguez Sánchez, for mismanaging at least 45 supply and public works contracts worth about $23 million. They join a long list of former Guainía governors arrested or removed from office for corruption in the past 20 years.

“How many governors have gone to jail here? Several. And Indigenous people? None. So, then who are the ones managing our resources?” says Luis Andrés Tabaquen, an accountant and legal representative of the Medio Rio Guainía Resguardo, another territory pursuing ITE recognition.

“The government doesn’t want Indigenous people to govern themselves. It doesn’t accept that they know how to manage the resources,” Tabaquen says.

Javier Gutierrez Camico tells Mongabay that the Indigenous communities were already managing about $340,000 in state resources for community projects, as part of the national government’s deforestation reduction program, Amazon Vision, and of the school meals programs with Guainía’s Education Secretariat.

The current governor of Guainía, Juan Carlos Iral Gomez, says his administration is developing the economy through environmentally friendly tourism that supports the autonomy of each Indigenous community.

“The territory of the department of Guainía is 80% Indigenous and is practically theirs on an ancestral level,” Gomez tells Mongabay. “They are the owners of their territory, and they are autonomous to make decisions in their territory. So that’s what we have respected, and I will continue to respect them until I leave office.”

A long history of struggle

A local creation myth holds that the original inhabitants of the eastern Amazon arrived here after a giant anaconda pierced through the universe, carrying inside it the ancestors of all humanity. As the serpent journeyed on, those ancestors turned human and became responsible for protecting the territory on which they landed.

Francisco Ortiz, an anthropologist and co-founder of the NGO Etnollano, tells Mongabay that during certain ceremonies, communities trace the lineage of their great-great-grandfathers and ancient relatives, connecting their family histories to where the myth says they landed and reinforcing their mandate to live on and take care of that territory.

“A bureaucrat doesn’t understand that territorial planning,” says Ortiz, whose organization has worked with Indigenous communities in the Colombian Amazon and eastern plains regions since the 1980s, focused on capacity building.

According to the characterization of Guainía by Colombia’s Amazonian Scientific Research Institute (SINCHI), Indigenous peoples in the Amazon have long been considered an obstacle to Colombia’s economic development and have suffered violence, slavery, and the fallout of successive waves of resource exploitation, from rubber to timber to animal skins to coca. Many Indigenous peoples in Colombia’s Amazon only had the opportunity to have their recent histories recognized when the country’s Truth Commission began hearings in the region, following the signing of a peace deal in 2016 between the government and the now-disbanded FARC guerrilla group.

María Carlina Tez, an Indigenous Kamëntsá woman and coordinator for the Truth Commission for the Amazon, says that for many Indigenous peoples, that was the first time that state institutions had come to listen to them.

“They had a chance then to unburden themselves, to release that repressed pain they had in their hearts,” Tez tells Mongabay. “They said that we began to heal because someone listened to us.”

According to the U.N., Colombia’s Indigenous people were disproportionately affected by the civil war between the government and the FARC, a conflict that ran for more than 50 years, killing more than 260,000 people and leaving more than 7 million internally displaced.

Tez says the work of the Truth Commission, which interviewed more than 1,200 people across the Amazon, has allowed communities to move on with their lives, rebuild social interactions, and continue the cultural practices that have long sustained them as communities. The commission’s efforts also fit into a wider process of recognizing not just the histories of the region’s Indigenous peoples, but also their ability to govern themselves. The commission’s final report is due at the end of June.

With all 14 ITE applications registered, Gaia Amazonas expects to start formalizing the first three Indigenous territorial entities by early 2023, according to Preciado. This would also bolster Indigenous communities’ broader efforts within the region to connect their land rights to conservation outcomes, aimed at protecting 80% of the Amazon by 2025.

This June, at the U.N.’s Post-2020 Global Biodiversity Framework meeting in Nairobi, Kenya, the Coordinator of Indigenous Organizations of the Amazon Basin (COICA) and the North Amazonian Alliance (ANA) made several recommendations for guaranteeing the rights of Indigenous peoples and local communities, as well as for recovering and maintaining the structural and functional connection of the Amazon Rainforest. These included urgently defining Indigenous territories in the Amazon, which would ensure long-term compliance with the U.N. Convention on Biological Diversity, which Colombia has ratified.