In May 2022, the largest locust infestation in a quarter century descended on South Africa’s Eastern Cape, stripping five million hectares (19,305 square miles) of grazing land. With another swarm predicted for September, the arrival of spring in the Southern Hemisphere, farmers in the vast 168,966 km² (65,238 sq. mi.) province have joined with researchers to introduce a high-tech innovation — a software package to track locust swarms in real time in the hopes of targeting them for extermination before they cause severe damage.

This will mark the first time the cutting edge software is used to track locusts in South Africa, says Bruce Jones, the country representative for EarthRanger, a software product of the Allen Institute for Artificial Intelligence, a non-profit research institute. The software solution, developed by Vulcan Incorporated in partnership with several conservation and technology partners, combines real-time data from ranger patrols, remote imaging and various sensors to generate real time wildlife and/or pest reports covering vast swaths of land.

Previously, this tracking software had only been used in South Africa to monitor the movements of large game animals. It was introduced there in 2017 after 113 elephants died over a two year period at the hands of poachers in the country’s biggest nature reserve, the 19,485 km² (7,523 sq. mi.) Kruger National Park.

Jones noted that the locust tracking technology is widely used in East Africa where the insects swarmed at record levels in 2019 through Ethiopia, Somalia, Kenya, Uganda, South Sudan and Tanzania, only dwindling in numbers in 2021 after they were targeted by those countries.

Working in collaboration with the United Nations Food and Agriculture Organisation (FAO), EarthRanger has operated command centers in Kenya and Ethiopia to monitor locust swarm movements, while also tracking workers and aircraft in real time to coordinate their rapid deployment to exterminate swarms.

Gunther Pretorius, the manager of Eastern Cape’s agricultural association (AgriEC), says that before it invested in EarthRanger’s assistance, his association and the province’s agriculture department could only pinpoint a locust swarm if a farmer or member of the public telephoned their offices with the information. But often lacking GPS co-ordinates, such calls made it very difficult to precisely locate the swarms.

“Now, the farmers can send GPS pins and we can put this data into EarthRanger and see exactly where these locusts are, and whether they are at hopper stage [juvenile locusts that cannot yet get aloft] or already flyers,” said Pretorius. “It will make it very easy for our district locust officers to determine where to spray, which swarms are the biggest, and which swarms to spray first.”

The software is dependent on people on the ground to populate it with data via reports to the AgriEC office. While the technology is capable of interfacing with drones that could collect more data over a bigger area, that interface has not yet been set up in Eastern Cape.

However, Pretorius is confident the locust activity maps created by the software will go a long way toward helping farmers and the government wipe out infestations this September.

Locust swarms threaten up to 10% of the world’s food supply, the FAO says, and Jones points out that since the swarms are annual events, reducing their volume would go a long way toward minimizing locust reproductive rates and their yearly damage.

The tracking process works best when it locates locusts while they are still “hoppers,” juveniles unable to fly. Once they’re spotted, farmers and locust control officers can most easily exterminate them on the ground at night or in the early morning when it’s cold and insect energy levels are low.

However, there’s a hitch, Pretorius said: Most swarms affecting the Eastern Cape start as hoppers in the neighboring Western and Northern Cape provinces and then fly over to Eastern Cape in hundreds of swarms up to 15 kilometers (9.3 miles) wide.

“We are actually the province that has the biggest problem because they reach us in a flying stage where it is very difficult to control them,” Pretorius explained. That’s because a locust swarm made up of millions of insects can travel fast, flying 150 kilometers (more than 93 miles) daily, devouring crops, citrus tree leaves and grasslands in its path. And hitting that rapidly moving target with sufficient pesticides can be challenging.

Because locusts lay eggs once they start flying, early tracking of the swarms will enable farmers and district locust officers to follow their flight path and look for eggs that can be destroyed before they hatch. This will help minimize future damaging swarms.

“Locust eggs can lie dormant for 10 or 15 years and then when the conditions are just right, they will hatch. This is why it is so important to track the swarms,” said AgriEC Communications Manager Jason Kümm.

Another artificial intelligence program, known as Kuzi, is in use in Ethiopia, Somalia, Kenya and Uganda. The Kuzi software tracks locusts by collecting “satellite data for soil moisture, wind, humidity, surface temperatures, and the vegetation index” which is then used to calculate a locust breeding index, which can help alert farmers to the birth of swarms three months in advance, explained Kuzi Chief Executive Officer John Oroko. 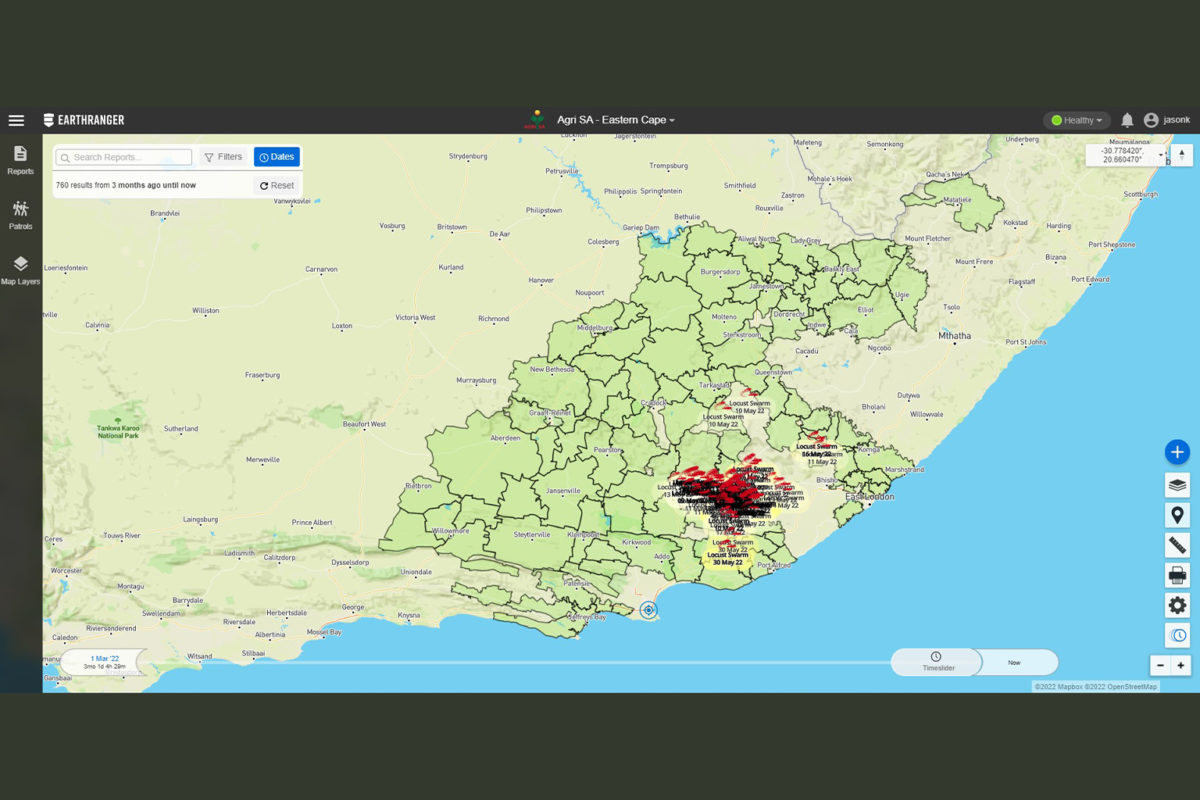 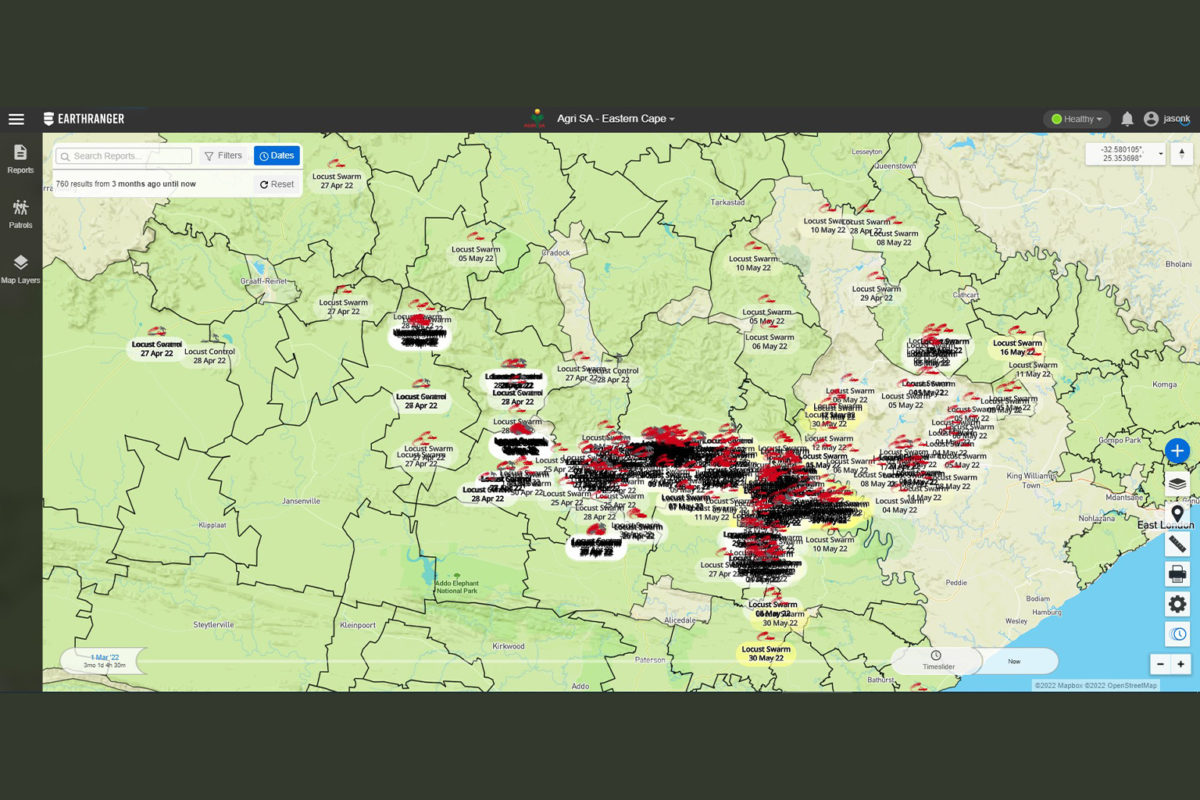 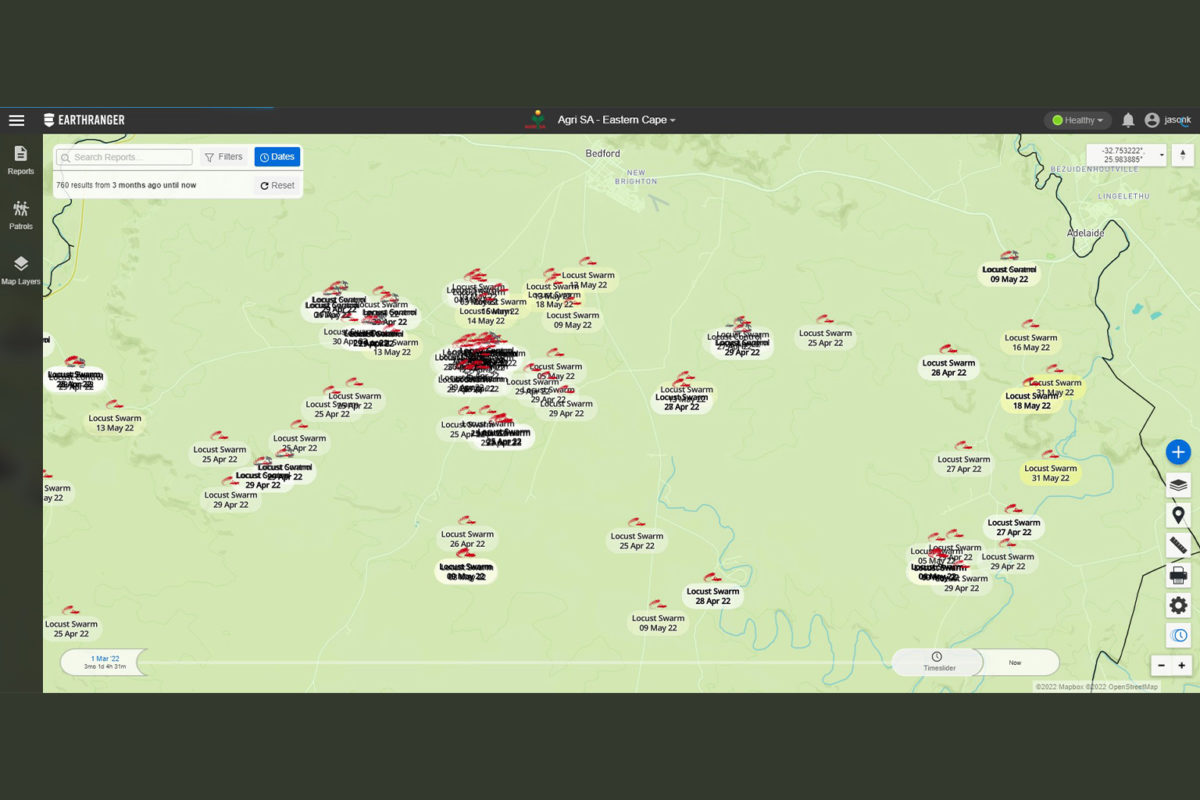 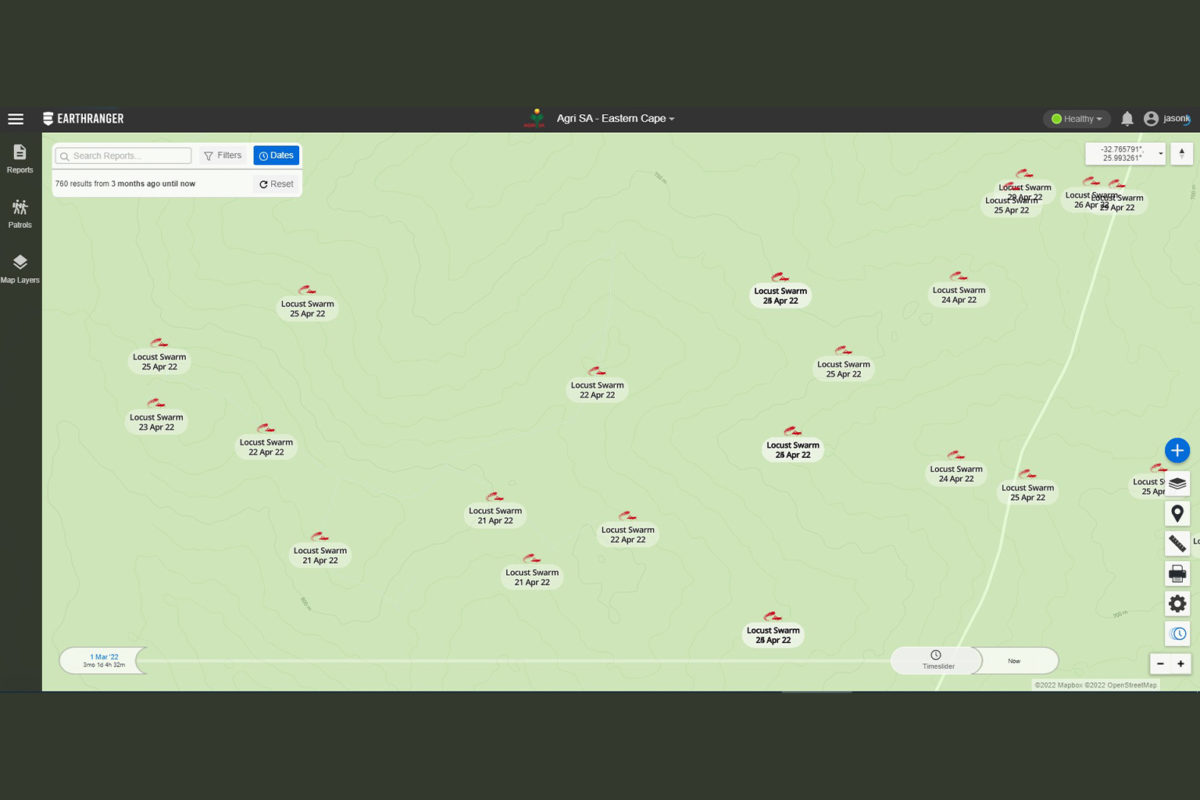 Worries over pesticide use

While South African farmers may now have the tools to locate swarms, conservationists have concerns about how the insects are destroyed in that country. Chemical pesticides, the continued mechanism for doing so, contrasts South Africa with the environmentally-sensitive pest control methods used in other African nations who now use biopesticides.

During the locust infestation earlier this year in Eastern Cape, the national government supplied AgriEC with two helicopters to treat the swarms with chemical pesticide, specifically Sumi-Alpha and Deltamethrin, and also provided 16 “blowers” (portable units that teams of workers carried on their backs to spray the insects).

“We had two situations where people used smoke instead, but it didn’t actually help a lot, so the main thing [used] was poison,” said Pretorius, noting that in some cases fires and smoke help repel locust swarms, though the insects then simply fly to another area.

The spraying of toxic pesticides on fruits or vegetables intended for human consumption is banned in South Africa, so farmers often utilize helicopter rotor downwash to corral flying swarms pushing them into unplanted spaces, where the insects can be sprayed, and their carcasses left to decompose on open ground.

One hope is that EarthRanger technology will allow farmers to quickly track down hoppers and spray them when “not so active,” said Pretorius, requiring less pesticide.

AgriEC believes that chemical pesticide, once sprayed, only contaminates the ground for two weeks. However, new research released in May 2022 recommends against chemical pesticides in favor of non-toxic biopesticides such as the fungus Metarhizium acridum to kill locusts.

Academics led by Samuel Kamga of Cameroon’s University of Yaoundé have found that once early warning software forecasts a locust invasion, experts can then calculate an optimal time when temperature and humidity are just right, so the applied M. acridum fungus will thrive. Ideally for prevention, fungus-based biopesticide should be sprayed across areas likely to be affected ahead of a swarm’s arrival.

Kenya-based Greenpeace Africa Campaign Officer Claire Nasike also supports the use of M. acridum-based biopesticides to control swarms. She says that, depending on their chemical properties, some pesticides currently in use last much longer than two weeks in soil, persisting and harming microorganisms that make soils fertile for crops.

She noted that toxic chemical pesticides can travel long distances via surface runoff and contaminate water sources they flow into. “Some can leach into groundwater sources, eventually contaminating them and reducing the available freshwater for use. Some, such as deltamethrin, which is frequently used, have the ability to harm bees (which are essential in food production), and fish.”

M. acridum, on the other hand, only kills locusts and doesn’t contaminate the environment. “It can be used to kill the locust swarms. This method has been proven to work in countries such as Tanzania and Madagascar, provided it is applied in good time. Toxic [chemical] pesticide use should not be a knee-jerk reaction to locust problems that can be solved with biopesticides and proper planning” says Nasike.

In South Africa, farmers eagerly await September to see how well their locust swarm early warning system works, and whether the insects can be effectively controlled.