A plan being pushed by the government of President Jair Bolsonaro to pave a long-abandoned road in the heart of the Brazilian Amazon has spurred a rash of land grabs by parties betting on a boost in land prices.

The BR-319 road, cutting through an 800-kilometer (500-mile) expanse of rainforest, was built in the 1970s to connect Manaus and Porto Velho, the respective capitals of the states of Amazonas and Rondônia. It deteriorated within just a few years, and by 1988 was impassable — effectively lost to the forest.

But the Bolsonaro administration’s plan to revive and upgrade it has coincided with a surge in deforestation and forest fires in the region: Deforestation in what’s known as the area of influence of the BR-319 road increased by 41% and forest fires by 9% in 2021 from the previous year. This is despite the fact that the area is home to 69 Indigenous territories and 42 conservation units — all of which are supposed to be protected areas. These figures are far higher than the 28% increase in deforestation and 32% decrease in fires experienced in the Brazilian Amazon as a whole.

“In fact, 2021 was the worst year for these indicators since 2010 [along the] BR-319 road,” says Paula Guarido, a public policy researcher at the Institute for Conservation and Sustainable Development of the Amazon (Idesam). Guarido coordinated the latest report by the BR-319 Observatory, a coalition of 11 organizations monitoring the forest around the road. 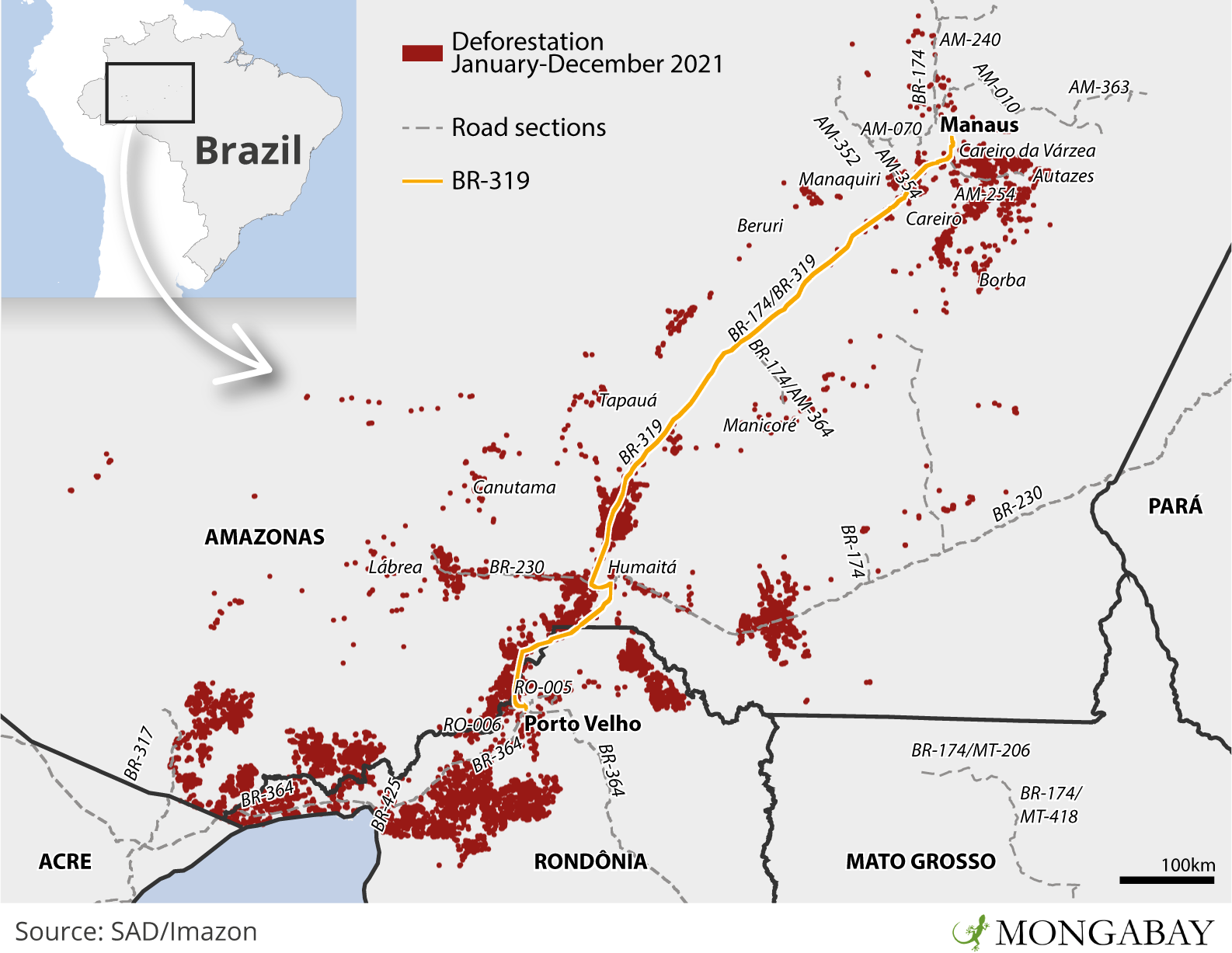 The surge in deforestation and fires has escalated alarms over the fate of the Amazon, which scientists warn is already losing its capacity for ecological regeneration. This has major repercussions for the rest of the planet, since the Amazon plays a central role in regulating Earth’s temperature.

“This is a very important region in terms of biodiversity,” says Fernanda Meirelles, public policy coordinator at IDESAM and executive secretary of the BR-319 Observatory. “It is located in the interfluvial region of two rivers and, in addition to the 69 Indigenous territories, it has several other unrecognized ones, including those of isolated tribes.”

This particular swath of the Amazon, bounded by the Purus and Madeira rivers, both of them tributaries of the Amazon River, is also home to dozens of subsistence forest communities. Known as extractivist communities, they live off the forest’s resources and have for generations helped to preserve it, but now find themselves forced to adopt the way of life of outsiders.

“The land grabber pays all the costs for the extractivist to clear the forest, and even gives him cows to raise and calves to take,” says Dione do Nascimento Torquato, secretary-general of the National Council of Extractivist Populations, or CNS. “He ends up cutting down Brazil nut trees to put cattle in their place, but in 10 or 20 years he won’t have the wealth of the forest to live on.”

The CNS has a proud extractivist history: It was founded in the 1980s by rubber tappers led by Chico Mendes, the labor leader and environmentalist whose efforts to protect the Amazon led to his assassination by cattle ranchers in 1988.

While 2021 marked peaks for both deforestation and fire hotspots in the forest surrounding BR-319, the signs of this impending destruction were apparent since 2017. That year, the Amazonas state government began debating a development plan for the region that would involve “the restoration of full trafficability conditions of the highway” — essentially paving the entire length of the road.

But the paving didn’t happen; several environmental impact studies were rejected by IBAMA, the federal environmental protection agency, and on several occasions courts had to intervene to ensure that any infrastructure projects did not violate the rights of the region’s traditional peoples. Yet the whole while, the indicators of destruction — forest loss and fires — kept rising.

“At that time we started to see an increase in deforestation, but not in such a pronounced way as it happened in the last three years, under the current government, which is breaking record after record, especially the south[ern section] of the highway,” says Idesam’s Guarido.

That section is the 200-km (124-mi) stretch of BR-319 starting in Porto Velho that has already been paved. In 2021, 94% of the deforestation around the road occurred in this southern stretch — a pattern that, according to the observers, is yet more confirmation that building infrastructure in the middle of the forest brings with it deforestation and other consequences.

“The paving increases occupation along the edges of the roads, forces the opening of trails into the forest, which we call fishbone roads, generates prostitution, including child prostitution, in the communities, and leads to land conflicts,” Meirelles says.

The other end of the highway, ending in Manaus, has also been paved. The focus of the current paving plan is the middle stretch that includes 400 km (250 mi) of dirt road between the Amazonas municipalities of Humaitá and Borba.

Yet even here in the unpaved middle section, deforestation is on the rise: in 2021, the municipality with the biggest increase in deforestation — up by 192% from the previous year — was Tapauá, is in the middle of BR-319.

The neighboring municipalities of Manicoré and Canutama also saw among the highest increases in deforestation last year. “Tapauá always had low rates of deforestation, but presents a change in pattern from 2018,” Guarido says.

When it was inaugurated by Brazil’s military dictatorship in 1973, BR-319 was fully paved all the way from Manaus to Porto Velho. Back then, the trip between the cities took 12 hours. But the heavy rainfall in the region, which has one of the highest precipitation rates in the entire Amazon, and competition from more established river routes for transporting cargo, left BR-319 degraded and forgotten.

In 1988, the last bus route plying BR-319 was suspended because the road was impassable. This left the hundreds of families who had settled along the length of the road isolated and in search of a better life.

“There has always been a popular call for this land connection between Amazonas and the rest of the country,” Meirelles says. “That’s why the debate about paving the BR-319 highway comes back every election year: it was part of various government plans, of Fernando Henrique Cardoso [Brazil’s president from 1995-2002], of Lula [2003-2010], and now, of Bolsonaro [since 2019].”

Despite the constancy with which governments have called for paving of the road, under Bolsonaro it seems more likely to happen: the environmental licensing process for the middle stretch is advancing with no regard for the necessary procedures to ensure an open, the observers say.

Public hearings, for example, took place in the middle of the COVID-19 pandemic, and without members of surrounding communities invited to participate. The Indigenous component study, a prerequisite to assess the impact of the project on Indigenous populations, hasn’t been completed; yet the environmental impact study that relies on its completion and is an important step for the continuation of the work, has already been issued.

Consultations with Indigenous communities hasn’t been carried out in accordance with Convention 169 of the International Labour Organization (ILO), to which Brazil is a signatory. “The Indigenous component study was restricted to some Indigenous territories that are located in the middle section, but we understand that a broad consultation should be done with all Indigenous peoples in the area of influence of the road,” Meirelles says.

Mongabay reached out to the National Department of Transportation Infrastructure (DNIT) for comment. The DNIT, which is coordinating the paving project, said it “will only begin work on the middle stretch after the permits are obtained.”

“The Federal Government believes in the viability of an undertaking with environmental governance, that recovers degraded areas and brings effectiveness to conservation units,” the department said in its response. “For this, extremely sophisticated environmental studies are being carried out.” The DNIT’s full response can be read here (in Portuguese).

The pressure on the forest isn’t just coming from Brazil’s capital. In Rondônia, the state legislature passed, and the governor signed, two bills to drastically reduce two local conservation units and eradicate another 11.

Both laws were struck down by a court as unconstitutional, but the damage was already done: deforestation inside the Jaci-Paraná Extractive Reserve, listed in both bills, was the highest among all conservation units and Indigenous territories in the BR-319’s area of influence. In this reserve alone, 7,818 hectares (19,319 acres) of forest were cleared in 2021, or double the size of Rio de Janeiro’s Tijuca National Park.

The Indigenous territory that suffered the most deforestation last year, according to the BR-319 Observatory, was the Karipuna reserve, which borders two of the conservation units affected by the Rondônia legislation. “Both the Jaci-Paraná Extractive Reserve and the Guajará-Mirim State Park, which had their areas reduced in 2021, are in the buffering area of the Karipuna Indigenous Territory,” Guarido says.

The new year hasn’t brought any relief, she adds: “The data from January 2022 are alarming. Deforestation was 339% greater in the area of influence of BR-319 than in January 2021.”

“It will keep getting worse,” says Torquato from the extractivist council. “Nobody needs to tell the land grabber to take land by force. He just needs to know that his fines will be forgiven, that the environmental law will be weakened. And this, the governments are doing very well.”

Banner image of a fire outbreak near the BR-319 road, by Orlando K. Jr./Fundação Amazonas Sustentável.

This story was reported by Mongabay’s Brazil team and first published here on our Brazil site on April 14, 2022.