Saving medicinal plants a village cause in Indonesia

MUARA JAMBI, Indonesia — In a wood-plank house on the banks of the Batang Hari River, a dukun, or traditional healer, named Siti Hawa, 62, handles a grass-like plant topped with white and purple flowers.

Its leaves can cure fever, she says, while the flowers can be boiled to soothe a cough. Outside, Siti grows more than 20 different kinds of medicinal plants, used to treat everything from stomach bloating and broken bones to malaria and even cancer.

“I was born a breech baby — a breech baby is sure to become a dukun,” she says with a laugh, referring to a condition where the fetus lies feet down in the womb. “So you see many medicines in my backyard.”

Indonesia is home to an estimated 10% of the world’s flowering plant species, more than half of which are found nowhere else on Earth. But unbridled human development is decimating that bounty. In few places is that as true as in Sumatra, where Jambi province is located, and where the expansion of oil palm plantations and coal mines has wiped out much of the island’s rainforests and biodiversity. 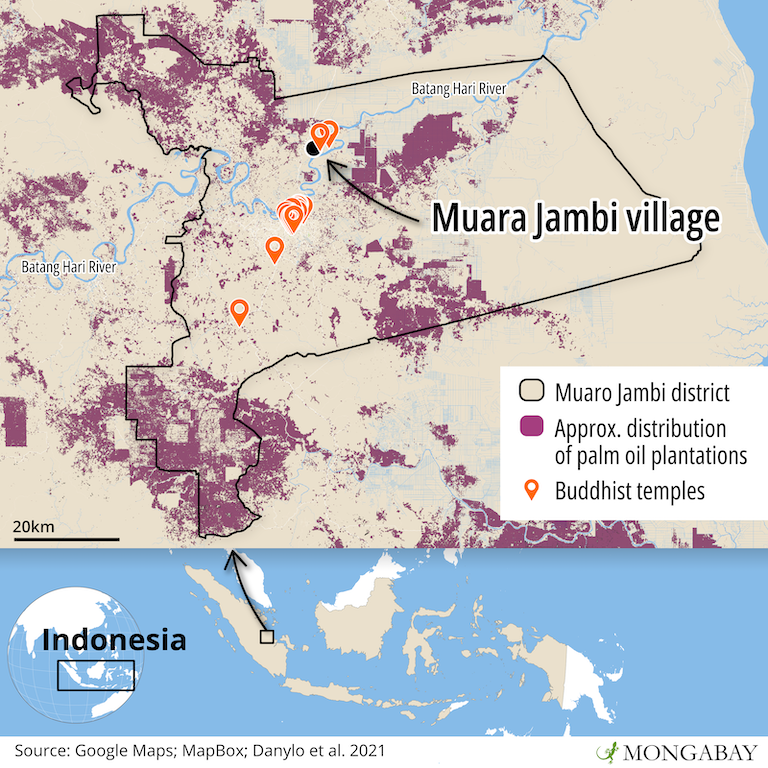 Besides medicinal plant cultivation, Muara Jambi is significant for another reason: it is home to dozens of ancient temples, most of them unexcavated. Some say the area once served as a “green university” for Mahayana Buddhism, an idea echoed by President Joko Widodo, who declared during a visit to the site in April that it had once been “the largest educational center in Asia in the seventh century.”

But when the president announced on the same occasion plans to conduct restoration work on the temples, it stoked fear among some locals that the program would actually harm the area’s medicinal plants, which grow not only in residents’ gardens but also freely amid the ruins of the archaeological sites.

The Gedong Temple, for example, is lush with kapung trees (Oroxylum indicum), also known as the Indian trumpet tree, whose seeds locals use to treat seasonal flu, and sungkai trees (Peronema canescens), whose leaves serve as an ingredient for a fever salve.

Some have turned to sungkai leaf as a tool against COVID-19. During the pandemic, Al Haris, the head of Merangin, another district in Jambi province, went so far as to distribute traditional sungkai medicine to coronavirus patients. In early 2021, he won the race for governor.

Madyawati Latief, head of the department of mathematics and natural sciences at the University of Jambi, said that while she wouldn’t go so far as to label sungkai leaf a cure for COVID-19, research has confirmed it has certain anti-inflammatory properties.

Hilmar Farid, director-general of culture at the Ministry of Education, Culture, Research, and Technology, said the restoration work on the temples would pay special attention to local medicinal plants. Jakarta is working with regional officials in the drafting of a master plan to develop the site, and coordinating with the Medicinal and Aromatic Crops Research Institute, a Ministry of Health agency, to ensure that important plants are conserved.

“The master plan includes the restoration of a number of temple sites still covered by earth,” Hilmar told Mongabay.

Mukhtar, the Menapo House Association founder, said medicinal plants in Muara Jambi have been part of the culture through the ages.

“What [President Widodo] has stated that here in the past was a learning center in medicine was correct,” he said. “That is reflected in the culture of the people of Muara Jambi.”

He said sand miners in the Batang Hari River had found tin scrolls with supposed mantras written in Sanskrit. The chant is “Sirih [betel leaf], sirih … help out in cutting gently, with a starch cloth, plant yourself by yourself, then pick sugarcane grass, palm sugar, and rootless shoots, protect, protect!”

The book Dreams from the Golden Island says this mantra is a curative one that invokes the names of medicinal plants. This 2018 book by Elizabeth Inandiak is an account of Sumatra’s historical role at the crossroad of the Buddhist Sea Route in the seventh century.

“The betel plant we know it as a medicinal plant. Its leaves are red, green and black and can cure 99 kinds of ailment,” Mukhtar said.

Yadi called on authorities to pay more attention to medicinal plants growing in the flood-free areas of the district.

“These are the patches where the living pharmacies can be found and can be set up as centers for education and plant tourism,” Yadi said.

However, oil palm plantations and coal mines near the temples can also destroy the medicinal plant habitat in Muara Jambi.

Yadi counted 12 companies that have stockpiles of coal not far from the temple complex.

The Menapo House Association says that of the 3,981 hectares (9,837 acres) that make up the temple complex, 1,000 hectares are under the control of oil palm and coal mining firms.

What’s more upsetting for the villagers is that the Muaro Jambi district authorities have zoned seven villages around the temple complex, including Muara Jambi village, as lying within an industrial zone, which allows the mining companies to put coal stockpiles there.

Meanwhile, the operations of the water-intensive oil palm plantations have disrupted the local water catchment area. “Now floods can easily occur as the catchment area has shrunk,” said Ridho Saputra, chair of a youth environmental organization in Muaro Jambi district.

The frequency of floods makes the medicinal plants in lowland areas vulnerable to extinction.

“All must return to harmony so that the human romance with nature endures,” Ridho said.

A version of this story was reported by Mongabay’s Indonesian team and published here on our Indonesian site on April 22, 2022.