Drastic declines in Neotropical birds in a protected Panamanian forest

Tropical forests harbor around two-thirds of the world’s biodiversity. The Neotropics—comprising Central America, the Caribbean and South America—are home to a third of the world’s known bird species, the highest among all biogeographical realms. Some families of birds such as toucans, manakins and antbirds are only found in the Neotropics. With its rich bird diversity, ornithologists and bird enthusiasts often flock to the region for birdwatching.

Deforestation and other human disturbances are known to have adverse impacts on bird populations. Large, intact forests are considered to be rich in biodiversity. However, a new study has found widespread and drastic declines in Neotropical understory bird populations in a large, protected forest reserve in central Panama over a period of 44 years. Published last month in the Proceedings of the National Academy of Sciences, the study revealed a decline in 70% of the bird species studied, spanning a diverse range of birds.

Few long-term studies have been conducted in the tropics; this is one of the longest studies of its kind in the Neotropics. While the researchers did not examine the causes, they believe indirect effects of climate change may be playing a role. Experts are concerned, saying the results are surprising and perplexing. Apart from protecting habitat, climate change must be minimized to stem the loss of tropical biodiversity, stressed experts.

“What was disturbing about this study is that there’s plenty of habitat there and the birds are decreasing within a protected area and that’s very concerning,” said senior author of the study, Jeffrey Brawn, professor at the University of Illinois.

The findings suggest that “protected areas, which are often considered reservoirs and safe havens of biodiversity, may not be as safe as we thought,” noted Henry Pollock, lead author of the study and postdoctoral researcher at the University of Illinois.

“The dataset is detailed and spans an unusually long time period; it’s hard to argue with,” said Douglas Levey, an evolutionary ecologist of the National Science Foundation, who was not involved in the study. “Most surprising is the overriding pattern of population declines in a large, protected area. Most—perhaps all—ecologists would not have predicted this. The implication is sobering: protecting large areas of critical habitat may not be enough to save species from extinction.”

The study was carried out in a 22,000-hectare (54,363 acres) protected reserve in the Republic of Panama. Established in 1980, Soberanía National Park is located about 25 kilometers (about 15.5 miles) from Panama City and consists of lowland tropical moist forest. As it is a National Park, there are no concessions or other types of mining activities—it’s totally protected, says Pollock.

From 1977 to 2020, mist nets were set up twice a year in the rainy and dry seasons. Birds that become entangled in mist nets, a common tool used by ornithologists, are carefully removed. The researcher notes the species, size and other details before releasing the bird back into the forest. Using the number of unique birds captured in the nets, the team modeled the populations for a diverse range of 57 resident species.

Over the study period, which consisted of more than 80,000 net hours of sampling time, the researchers captured over 14,000 unique birds. Irrespective of their body mass, foraging groups or initial local abundance, 40 out of 57 bird resident species (70%) declined in abundance over 44 years. Declines were severe for 35 species that lost more than 50% of their initial abundances.

“The loss of common species, and especially in fairly large numbers, I think, is really concerning in terms of ecosystem integrity because when you don’t have these ecosystem services occurring, you’re going to have a degradation of the entire ecosystem altogether,” warned Pollock. 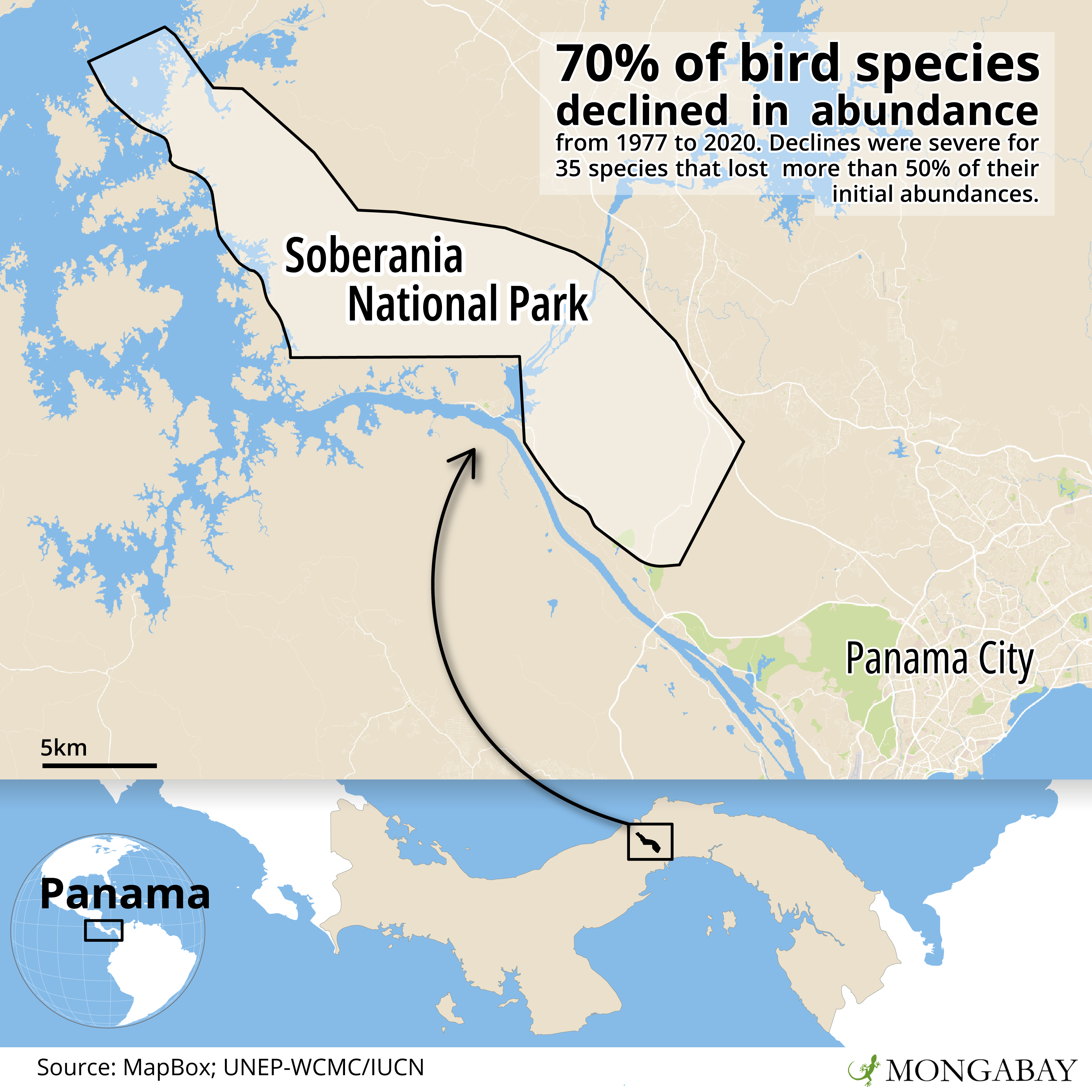 These findings add to a “small but growing body of evidence for significant long-term declines in biodiversity in undisturbed tropical forests—replicating previous findings from the Ecuadorian and Brazilian Amazon,” said Alexander Lees, senior lecturer at Manchester Metropolitan University in the United Kingdom, who was not connected to the research. According to a new report co-authored by Lees, entitled “State of the World’s Birds”, around 48% of bird species worldwide are known or suspected to be undergoing population declines.

Birds are often grouped into “foraging guilds” depending on the type of foods they forage on, such as insects or fruits. Previous studies from undisturbed forests found that understory insectivores (insect-eating birds) declined the most.

“We found that not only are understory insectivores declining, but also all the other guilds, except for maybe the hummingbirds that seemed to be doing a little bit better, but everything was declining,” Pollock said. “And that to us is really scary and suggests some sort of broader ecosystem-level process related to climate change,” he added.

A couple of species that suffered 90% losses in populations may be explained by a loss of regional connectivity to forests outside of the reserve. Some species migrate seasonally to higher elevation forests to the east of the Isthmus of Panama while others are connected to wetter forests on the Caribbean side of the Isthmus. From 1950 to the 1980s, large swathes of forests around the Isthmus were cleared. As a result, regional connectivity between the study site and these forests was lost since the study began, explained Brawn. “So, the park as a whole has become more isolated.”

The mechanisms behind why so many species are declining are unknown, say the researchers. “For the majority of the species, we’re scratching our heads on why they’re decreasing,” says Brawn. To pinpoint the causes, the authors state that long-term studies are needed for each species.

Since birds from a lot of foraging guilds declined, Pollock hypothesizes that “it could be some systemic change in food across the board.” Lees also says that changes in food resources as an indirect effect of climate change might be a contributor. “Warmer temperatures, often exacerbated by El Niño events, may extend dry season lengths leading to desiccation of normally humid forest microhabitats like the leaf litter, resulting in a drop in the abundance of key food resources such as insects,” he explains.

How to maintain bird populations?

One of the responses of populations to climate change is to move to another, more favorable area, explained Pollock. He suggests creating more corridors on a regional level to maintain forest connectivity. “Giving birds the ability to move—and birds are quite mobile—I think that would be one step in the right direction, at least for some species.”

The findings raise concerns that protected areas in the tropics may not be sufficient to preserve bird populations.

“We should always protect more habitat at the very least,” Brawn stressed. “That’s the first thing that needs to be done, but if other studies and other areas start to find what we found then we need to start looking at more of what might be going on at the ecosystem level within habitats that might be affecting the viability of these populations.”

Both Brawn and Lees underscore the importance of minimizing climate change. “Many tropical forest systems may be approaching their thermal limits and hence run the risk of breaching tipping points” that may “drive major loss of biodiversity and ecosystem services,” warned Lees. “It is imperative that we do everything possible to limit this change.”

“Indigenous reserves are often more resilient to external pressures on other types of protected areas,” noted Lees. “In this case, however, the threat from climate change is global in scope and the protected area type will likely make little difference—although Indigenous peoples themselves have been very vocal in protesting relative global inaction on the threat of climate change.”

Banner image: The Ruddy-tailed Flycatcher (Terenotriccus erythrurus) is a common species that forages on insects in the forest understory (an understory insectivore). Image courtesy of Dr. John Whitelaw.

Related listening from Mongabay’s podcast: We speak with Sy Montgomery about his two most recent books about our avian comrades and Mongabay staff writer Abhaya Joshi about a new bird-counting app in Nepal. Listen here: