“When I was a kid, it was easy to find and catch fish and to see hatchlings of turtles walking around the beach on my way to school,” says Matla’ah, a resident of Gili Indah village on Gili Trawangan, a sun-kissed island popular with divers between the better-known Indonesian islands of Bali and Lombok. For the current generation of Gili Trawangan children, these experiences are less common, as many of the island’s coastal ecosystems have been severely damaged by natural and human-related disturbances.

In August 2018, a 6.9-magnitude earthquake hit northern Lombok, leaving 563 people dead, more than 1,000 injured, and 417,000 people displaced from their homes. Gili Trawangan, just 42 kilometers (26 miles) from the epicenter of the quake, also experienced widespread damage, though not as much destruction as the more built-up and densely populated Lombok mainland.

That event was followed less than two years later by the COVID-19 pandemic, which shut down the tourism industry that has always been Gili Trawangan’s main earner. While for many on the island it meant a massive disruption to their livelihood, for others it presented an opportunity to restore their damaged coral reefs.

Matla’ah was among 20 local community members from her village who helped establish the Pokdarwis Tramena tourism awareness group and the Pokmaswas Gili Matra community monitoring group. Together, they self-funded a reef restoration project that focuses on building and maintaining small coral reef gardens around Gili Trawangan.

“First, we tried to make our small reef gardens using discarded steel poles and unused concrete blocks that we found in the former earthquake ruins,” Matla’ah says. “We made 100 steel units and 30 units of concrete blocks which we then planted baby coral onto to see if it worked or not.”

While this first method worked, the group also tested a second method they learned from the internet: they collected leftover structures from previously abandoned reef restoration projects and placed them in the sea near their village.

Tries Blandine Razak, a scientist researching coral reef restoration from the Bogor Institute of Agriculture (IPB) near Jakarta, first learned about the project when visiting the island for work. She tells Mongabay that she’d “never seen anything like it.” These self-funded groups, consisting entirely of volunteers, served to demonstrate the power of community-led action.

According to the World Resources Institute (WRI), more than 85% of Indonesia’s reefs are under threat due to human activity. The main impacts come from overfishing and destructive fishing, as well as intensified coastal developments and pollution. And this doesn’t yet include climate change. To address the threats, government agencies, NGOs and local communities have initiated a massive number of coral restoration projects using a diverse set of methods throughout Indonesia’s coastal waters. However, experts say the failure rate of these restoration projects is remarkably high. 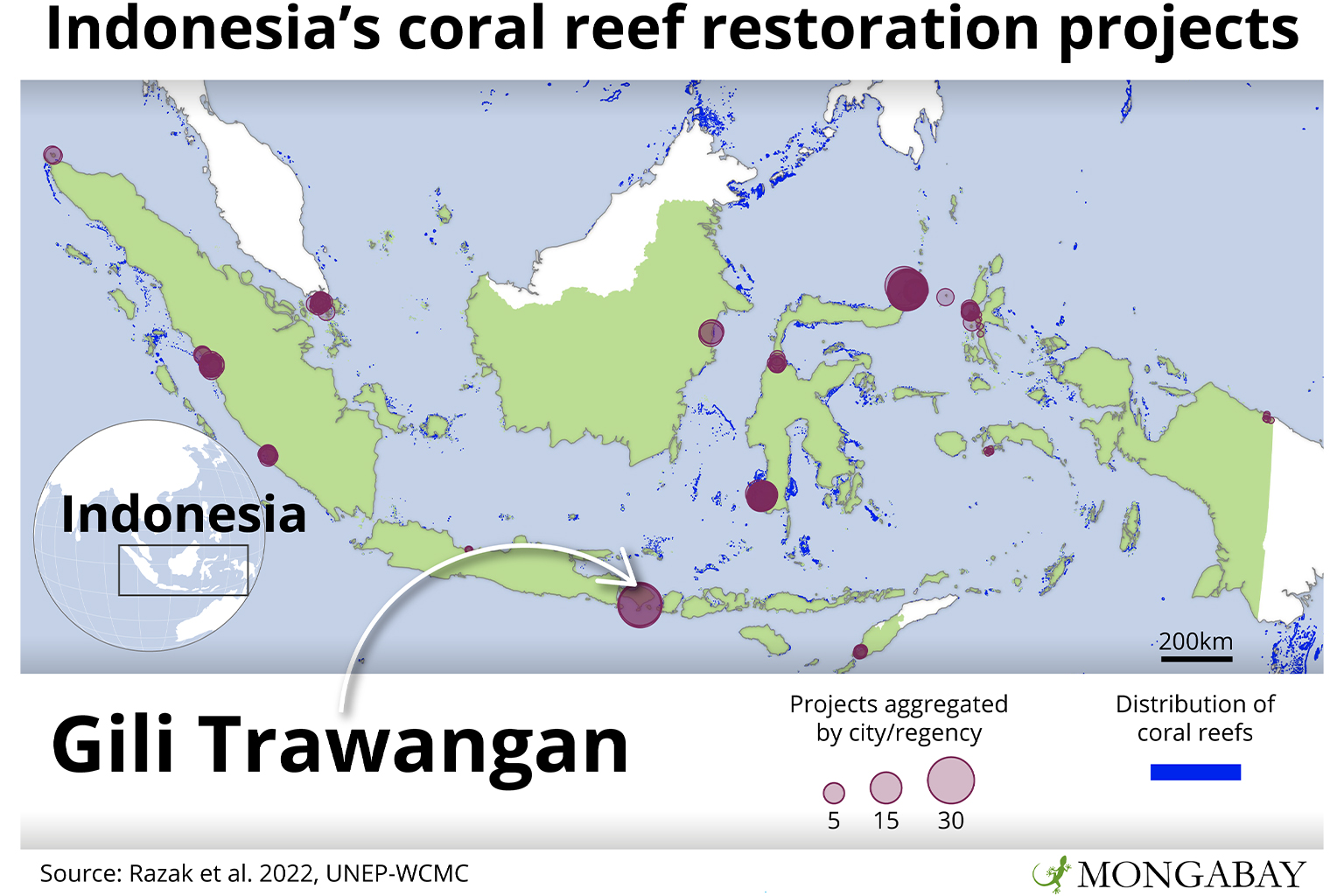 But these high numbers haven’t always translated into positive results. According to the recent review, many projects are established without clear objectives, which reduces their chance of success. Additionally, only 16% of the 533 projects included a monitoring program, which researchers say is key to the long-term success of restoration interventions.

“The growing popularity of reef restoration has made people think they can have a go at it with little scientific guidance and preparation, only to find out later that the location, methodology, or coral species used are not suitable,” Rili Djohani, executive director of the Coral Triangle Center (CTC), a training center that specializes in marine conservation work, tells Mongabay.

These rehabilitation efforts include both corals grown in labs and those taken from the wild and moved to a new home, known as coral transplantation. These new homes are often crafted using man-made concretes structures, onto which the corals are grafted. Sometimes coral larvae will settle on the surface of these artificial reefs naturally. Another method is to directly fix coral fragments onto the seabed.

The community project in Gili Trawangan used the latter method, cutting pieces from reefs in existing colonies and planting these directly onto the artificial structures.

Nearly a quarter of Indonesia’s 270 million inhabitants live within 30 kilometers (19 miles) of a coral reef. These waters are therefore important in providing a myriad of benefits, such as food, shoreline protection, and a source of tourism revenue.

Need to sweat the details

“Reef restoration is a complex matter, and a lot of factors need to be considered for it to be successful,” Djohani says. Such factors include water quality and environmental suitability, which should be identified before any restoration work begins.

“A lot of organizations or projects do not identify the cause of damage in an area, and they don’t measure the quality of the environment there,” Rifat Muharam, a marine biologist at the Misool Foundation, tells Mongabay. “The effects of tourism and other impacts might still exist, but they don’t deal with these problems beforehand.”

This leaves some reseeded reefs trying to survive under still impossible conditions.

Razak, the coral expert and lead author of the recent review paper, says many artificial units — underwater structures that are meant to provide a stable growing area for corals — often fail to regenerate coral populations due to a lack of post-installation monitoring, with many groups abandoning structures they no longer consider active.

Without monitoring, it’s difficult to understand how coral, fish and invertebrate populations respond to restoration efforts.

In their paper, the researchers wrote that only 85 of the 533 projects incorporated a post-installation monitoring program. Fifty-five percent of these monitoring studies revisited the restoration site only once. Others visited the sites between two and 16 times throughout the study period.

One reason for the lack of follow-up is that reef restoration budgets rarely cover the cost of the long-term evaluation.

“Maintenance and monitoring are rarely included in the proposal,” Razak says.

Researchers like Razak say reef restoration budgets need to include funding for post-installation monitoring to care for the corals, as well as funding to evaluate the success of a project over time. The successful project in Gili Trawangan serves as an example on how to do this, she says.

“Whenever they see the coral overgrown by algae, they remove it [and] rearrange [the corals] when needed,” Razak says of the restorers, adding that now “the corals are flourishing.” Algae, if left unattended, can smother coral — another reason why monitoring and ongoing restoration remain vital.

Many other projects have harnessed the power of community-led approaches. For instance, the Misool Foundation, based in the Raja Ampat Islands in Indonesia’s Papua region, employs locals as rangers to conduct surveillance patrols against any illegal activity that could harm the reefs. Similarly, the Yaf Keru community-based reef restoration project, also in Raja Ampat, views community involvement as the “cornerstone of the project,” says Arnaud Brival, the project’s co-founder.

“By involving the [local] people, you can also greatly reduce the logistical costs of the monitoring,” he says. “If someone from France comes to do the monitoring every year it’s already going to be more expensive than if you have someone in the village capable of doing the work for you.”

To address the issues associated with reef restoration project failure in Indonesia, the review’s authors recommend that projects set out explicit objectives from the start. These should include examinations before any restoration work begins and, of course, long-term monitoring.

“It’s very important to increase awareness and understanding about where coral restoration could be useful,” Brival says, “and, conversely, where it is absolutely pointless.”