KATHMANDU — Nine lakes listed as Ramsar sites, perennial rivers that start from the Himalayas and beyond, and lush green fields in the foothills of the mountains: these features make Pokhara, a tourist town in western Nepal, a paradise for birds.

But the paradise, home to 470 species of birds, could soon be abuzz with aircraft flying in and out of the city, which relies on tourism dollars to keep itself afloat. Every year, thousands of people from around the world visit Pokhara, also the gateway to the famous Annapurna Circuit trek, to enjoy its natural beauty and partake in adventure sports such as paragliding, mountain biking, boating, and canyoning.

A regional international airport, spread over 200 hectares (nearly 500 acres) is being built 3 kilometers, or less than 2 miles, east of the city’s existing domestic airport. The facility will serve as Nepal’s third international hub, after Kathmandu and Bhairahawa. Once operational, the airport is expected to host flights to neighboring India and China and to Southeast Asia, seen as a potential tourism market.

“The contractor has been given a July deadline to complete construction work,” said Bikram Raj Gautam, head of the Pokhara office of the Civil Aviation Authority of Nepal. “We will soon start flights after the government gives us a date to do so,” he added.

Chinese Foreign Minister Wang Yi, during his visit to Nepal in late March, handed over the symbolic key to the airport to his Nepali counterpart, signaling that the airport will be ready for operations soon.

Residents of the city had long been demanding that an international airport be built in Pokhara so that tourists who want to come to the town directly can do so without having to transit through the capital, Kathmandu, which until recently was the lone international airport in the country. Work on the new regional airport, which had been planned in the 1970s, only began in 2016 following sit-ins and protest rallies by residents. The federal government signed a $216 million soft loan agreement with China Exim Bank to finance the airport. 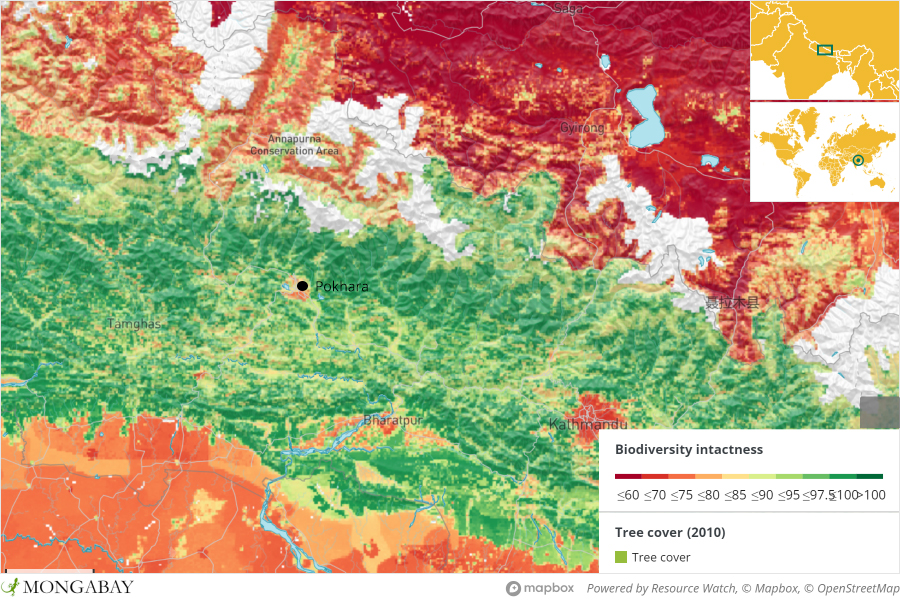 As the date for its launch draws closer, conservationists are concerned about threatened birds of prey roaming the skies of Pokhara. They warn that the birds could collide with aircraft, risking their own lives as well as those of the people on board. Bird hits are common at Kathmandu’s Tribhuvan International Airport, more than six decades after the first flights landed there.

“Our major concern with the airport is the Bachchebaduwa landfill site located close to the new airport,” said ornithologist Krishna Prasad Bhushal, also a member of the Vulture Specialist Group at the IUCN, the global conservation authority. “Landfill sites attract birds of prey such as vultures and eagles as they are filled with carcasses of animals and other organic waste.”

As the valley’s landscape is ideal for vultures, Pokhara is home to all nine species of vulture found in South Asia, where their numbers have been declining, especially in the plains. The birds can be seen circling the valley scouring for food on the ground, especially near the city’s landfill area, which is only a few kilometers away from the new airport. Critically endangered species such as the slender-billed vulture (Gyps tenuirostris) and white-rumped vulture (Gyps bengalensis) have also been found nesting in the valley for years. “Similarly, the area falls on the migration route of the endangered steppe eagle [Aquila nipalensis],” Bhushal said.

Although more than 50 other migratory birds, most of them waterbirds, have been recorded in Pokhara during the winter, they’re less likely to hit an aircraft as they mostly remain in the waters of the wetlands during their stay and don’t soar in the sky the way vultures and eagles do, Bhushal told Mongabay.

Another problem, according to Hemanta Dhakal, secretary of the Pokhara Bird Society, an NGO working on the conservation of birds and their habitats, is the Bijaypur rivulet that flows west of the airport. The river brings with it carcasses of animals from upstream, especially during the monsoon, attracting birds of prey, he said. “The major concern is that of bird collisions during takeoff and landing,” Dhakal said. He was among the residents who pressed the government to revise the initial environment impact assessment of the project, which did not incorporate the threat posed to and by endangered birds.

Following lobbying from conservationists, the federal government recently commissioned a supplementary EIA of the project. The draft report, available on the Ministry of Forests and Environment website, identifies key species of birds that would be affected by the airport and those that would affect traffic at the airport. It also points out the landfill and the river as the main areas of concern. It suggests that the landfill site be moved elsewhere and the river be monitored regularly.

Gautam from the Civil Aviation Authority agreed that the landfill site needs to be cleared at the earliest. “We understand that if we keep feeding the pigeons on our rooftop for 10 days and stop on the 11th, they will continue to come to us even when there is no food,” he said.

To that end, the office of the provincial chief minister recently organized a meeting of stakeholders to speed up the process. The Pokhara-Lekhnath Metropolitan City Office, responsible for managing the landfill sites for the city, was criticized for not shifting the landfill site in time.

The city office said it has already identified a location for the new landfill site and is working on acquiring the land. “The new site is around 10 km [6 mi] away from the airport and the Civil Aviation Authority has also given its nod to it,” said Bharat Raj Paudel, information officer at the Pokhara-Lekhnath Metropolitan City office.

Gautam told Mongabay that the Civil Aviation Authority understands the value of critically endangered species such as vultures and can’t imagine killing them.

“Instead, we are thinking of deploying light reflectors and other technology available to keep the birds away from harm’s way,” he said. “It is important to understand that the air also belongs to the birds, and we can’t hope to fly in the sky devoid of birds. We need to be able to share the air with them and ensure their as well as our safety.”