‘No’ to corporate-driven tourism development in Komodo National Park (commentary)

Commentary by Venansius Haryanto on 19 April 2022

In early 2022, the public in Labuan Bajo, the gateway to Indonesia’s popular Komodo National Park, was both pleased and dissatisfied with the Indonesian Ministry of Environment and Forestry’s decision to evaluate permits belonging to two private companies planning to invest in the park. The companies, PT Sagara Komodo Lestari (SKL) and PT Komodo Wildlife Ecotourism (KWE), had obtained permits to build tourism business facilities inside the park, a unique conservation area home to the world’s largest lizard, the Komodo dragon (Varanus komodoensis). Despite the announcement, however, there is no guarantee the government will actually revoke these licenses.

These corporate land concessions are a long-standing concern for the public in Labuan Bajo and elsewhere. In contrast to the government’s claim that these programs will boost tourism development in and around the island of Flores, where Labuan Bajo is located, various civil society elements have rejected plans to build exclusive resorts inside the park for fear it will result in ecological and social crises. A coalition of civil society groups even sent a letter to UNESCO in 2020 while continuing to consolidate themselves through the wave of public protest in the past three years. In the letter, the public asked UNESCO, which recognizes Komodo National Park as a World Heritage Site, to urge the Indonesian government to review the tourism master plan for the park and to revoke the companies’ concessions.

Luxury resorts in the land of the Komodo

Under the umbrella of this regulation, the forestry ministry in 2013 granted permits to SKL and KWE. The former received an IUPSWA permit covering 22.1 hectares (54.6 acres) in the Loh Buaya area of Rinca Island, one of the main islands that comprise the national park. Meanwhile, KWE received an IUPSWA to invest in two islands: 274.8 hectares (679.1 acres) on Padar Island, and 154.6 hectares (382 acres) in Loh Liang, Komodo Island.

Besides these two companies, the government also issued permits to PT Synergindo Niagatama (SN) to invest in Tatawa Island, an islet near Komodo Island. Between 2014 and 2020, the environment ministry placed nearly half of the island under the control of this company. 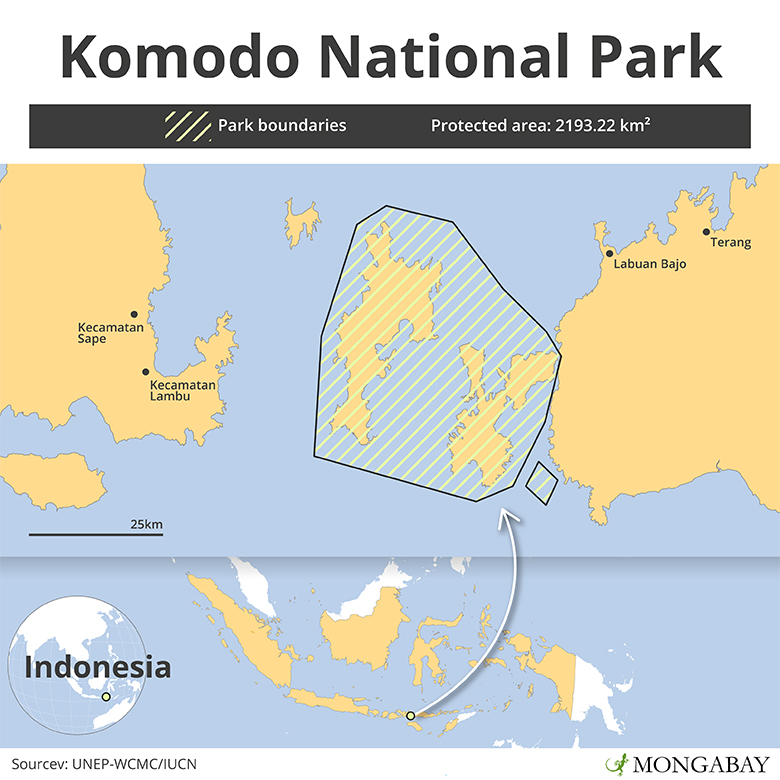 The issuance of these permits has sparked public protest, on the grounds that they are inconsistent with conservation principles. In August 2018, as the public learned about SKL’s plan to begin construction of its resorts on Rinca Island, various civil elements in Labuan Bajo, consisting of environmental activists, local NGOs, and local tourism actors, came together to protest the plan. They took to the streets at the beginning of the month in protest. A group of people went to Rinca Island, destroying the fence erected around SKL’s concession. In mid-August, representatives of the movement met for discussion with environment ministry officials in Jakarta.

Furthermore, what makes people stand their ground to refuse the companies’ gigantic constructions inside the park are research findings on the vulnerability of Komodo dragons to extinction when affected by global warming. Research conducted by a group of scholars shows that Komodo and Rinca islands are the last safe havens for the species under the effects of global warming. Henceforth, attention should be paid to the islands of Komodo and Rinca, as those are important refuges for Komodo dragon.

Separately, in 2021, the IUCN updated the Komodo dragon’s conservation status from vulnerable to the more severe category of endangered. According to the IUCN, the Komodo dragon is threatened by the impact of climate change, with rising global temperatures and sea levels set to reduce the ancient lizard’s habitat in Komodo National Park by more than 30% over the next 45 years.

Besides endangering the future of conservation in the national park, this policy also neglects the local community’s struggle for their agrarian rights inside the park.

Soon after the designation of Komodo National Park in the early 1980s, the Ata Modo people, an Indigenous community living on Komodo Island, lost their agrarian rights both for settlement and livelihood land. Since then, the community has had less than 17 hectares (42 acres) of the residential zone under the environment ministry’s authority. Related to this, researchers on agrarian issues in Komodo village, Dale & Afioma (2020) coined the term “park and parked community” to describe the life of Komodo people who “live in an enclave inside the national park with no legal/agrarian rights and with limited access to land and marine utilization zones for their livelihoods.”

Positioned as a group that is very vulnerable to being affected by exploitative development, the Ata Modo have struggled to secure their agrarian rights in the past decade. First, they want agrarian recognition over the residential area in Komodo village. The area would include residential lands, home yards, and the community’s farm estate. Secondly, they want to take back their former customary lands in some parts of the island, particularly in Loh Liang. The area is very important as a community tourism development area.

On behalf of regulation

Regarding the companies’ concessions in Komodo National Park, the government argues that such developments are in line with existing regulations. But the fact is that such a process has been legitimized by producing several regulations to pave the way for the investors’ path into the park.

The zoning review for Padar and Tatawa islands is a clear example of how the government changed existing regulations to accommodate PT Komodo Wildlife Ecotourism and PT Synergindo Niagatama. KWE’s concession on Padar Island was preceded by a zoning review policy, the conversion of the wilderness zone of Padar into a utilization zone. In 2012, the environment ministry converted 303.9 hectares (751 acres) of land on Padar Island into a land tourism utilization zone. This utilization zone then was divided into 275 hectares (680 acres) of business space and 28.9 hectares (71.4 acres) of public tourism space. In 2014, 274.13 hectares (677.39 acres) of the total 275 hectares of business space were handed over to KWE.

The case on Tatawa Island is even more interesting. The government has twice made zoning changes on the island to smooth out SN’s investment. In 2001, Tatawa Island was classified as forest area. Zoning changes began to occur in 2012, when the forestry ministry converted 20.94 hectares (51.75 acres) of land on the island into a land tourism utilization zone. Then, based on the site design, this utilization zone was divided into 14.45 hectares (35.72 acres) of public space and 6.49 hectares (16.04 acres) of business space. In 2014, SN received a concession on Tatawa Island with the right to build a tourism business on an area of ​6.49 hectares. This means the entire business space in the utilization zone on this island was controlled by SN.

Four years later, in 2018, the government revised the site design of the utilization zone. This revision significantly reduced the public space to only 3.45 hectares (8.52 acres) and expanded the business space to 17.50 hectares (43.24 acres). In April 2020, the ministry reissued SN’s business license. A total of 15.32 hectares (37.86 acres) of the total business space is now controlled by PT Synergindo Niagatama.

What should the government do?

As someone who has engaged intensively with the issues of conservation and tourism in Komodo National Park over the past four years, I have found at least three fundamental reasons behind the public’s rejection to the tourism investment inside the park.

First, as explained above, the national park is home to the endangered Komodo dragon. Komodo and Rinca islands are the two islands with the highest populations of Komodo dragons. The second is the living space (settlement and livelihood area) of Indigenous people inside and around the park. Third, this area is an undeniable epicenter of Indonesian tourism. The park’s nature preservation is the key reason behind the rapid progress of tourism in East Nusa Tenggara province and Indonesia in general.

Therefore, in their movement, the public always conveys the two following demands: First, the government should cancel all the companies’ concessions. Any resorts should be built outside the park to keep it a safe place for the dragon and its companion species and a living space for Indigenous communities.

Second, the government should pay more attention to improving coherent conservation programs for both land and sea areas for short- and long-term periods. This can be carried out by encouraging collaboration with communities within and around the area. It is very important to position them as active conservation and community-based tourism practitioners.

Venansius Haryanto is a researcher at Sunspirit for Justice and Peace, a research-based advocacy NGO based in Labuan Bajo, on the island of Flores.