by Suryadi on 5 April 2022 | Translated by Julia Winterflood

PEKANBARU, Indonesia — Upon his inauguration as governor of Riau in early 2019, Syamsuar promised to “protect the dignity of Indonesia” by ensuring that the vast Sumatran province, home to rivers, forests, peatlands and oil palm plantations, did not experience another wave of forest and land fires.

Three years on, Syamsuar has declared an emergency alert status for forest and land fires in Riau, spanning late March to the end of November 2022. This follows an emergency status declared by the Riau districts of the Meranti Islands and Bengkalis for similar periods. The fires are exacerbated by drought, and most of Riau is predicted to experience peak dry season between May and June.

Even before the onset of the dry season — since the beginning of the year, in fact — fire hotspots and incidents have spread in the province, according to the provincial office of Indonesia’s weather and climatology agency, the BMKG. Riau’s coastal regions are most vulnerable; their proximity to the sea means the weather can change rapidly. 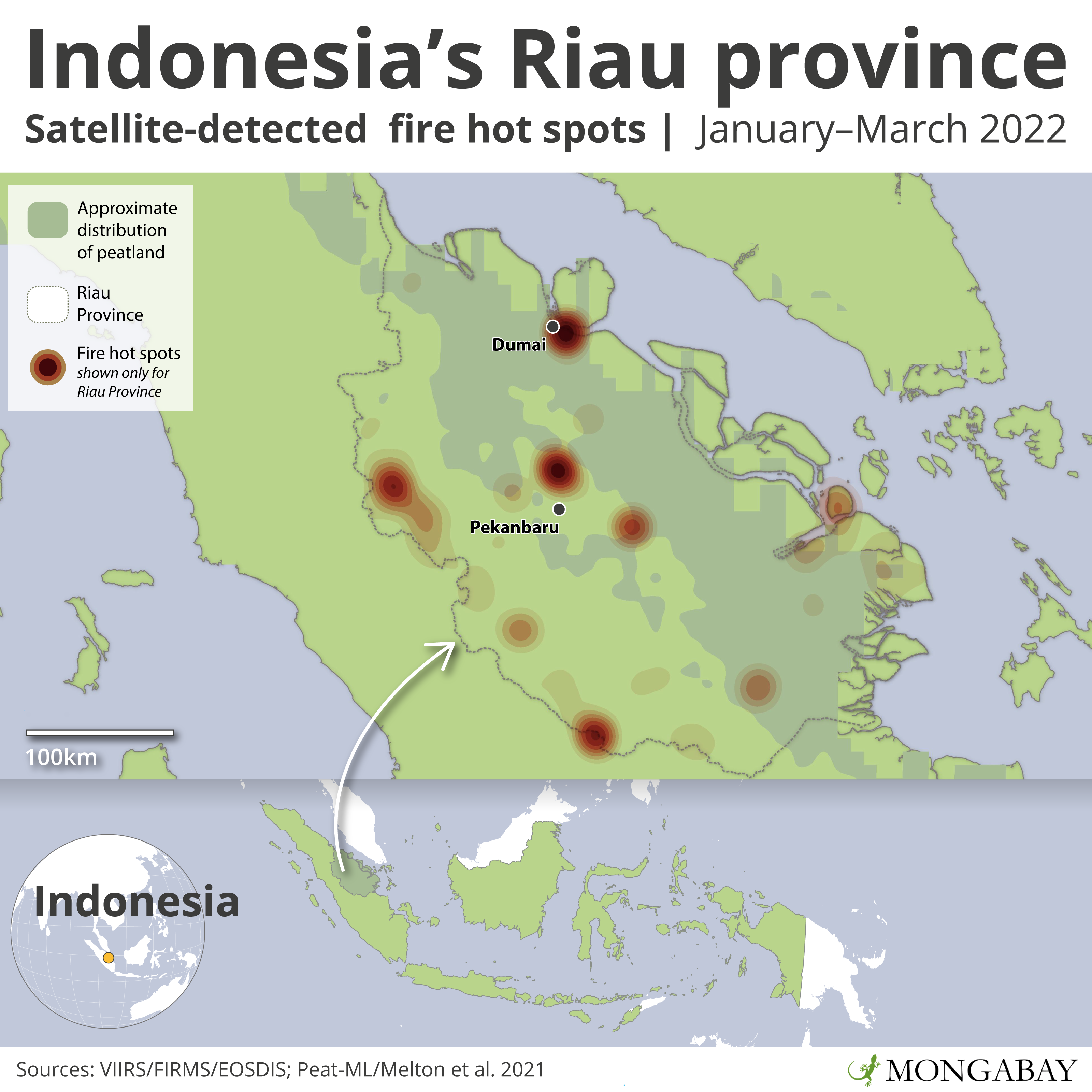 As of March 22, fires have burned across nearly 167 hectares (417 acres) of forest and land in Riau so far this year, according to the BMKG’s climatology station in Riau’s Kampar district. However, data from Indonesia’s environment and forestry ministry, which incorporate data from the BMKG as well as other government agencies, show a much larger burned area in Riau, at 421 hectares (1,040 acres).

To mitigate drought, the province’s disaster management agency, the BPBD, has requested cloud-seeding efforts to induce rainfall, as well as patrol helicopters and water bombing to fight the fires. The agency has also prepared fire engine pumps in each city and district, while citizens are trained annually on how to operate fire-extinguishing tools.

The key to handling forest and land fires is speed of information and fast and precise responses, said BPBD head K.M. Edy Afrizal. “Peatlands are difficult to extinguish when the fire is big. Not to mention if there are water source constraints.” When the fires are small they are immediately extinguished without awaiting orders, he said. “That’s our collective responsibility.”

Even Sembiring, executive director of the Riau chapter of the Indonesian environmental NGO Walhi, said the government has fallen into a similar hole as in previous years.

From a social aspect, the emergency status is positive, he said. On the other hand, it shows that the central and regional governments’ fire prevention efforts are weak, and that problems with environmental restoration policies persist. “This does not solve the basic problem of forest and land fires,” he said.

Even pointed to the cloud-seeding efforts as one example. This method, he said, protects people from the threat of air pollution but costs a lot each year. He said it would be more beneficial if the funding that went into it was instead was allocated to addressing the root of the fire problem, such as evaluating and revoking the licenses of corporations that fail to comply with environmental standards.

“It’s very strange that the budget is wasted on this type of technology,” he said. “Especially if a fire in a company’s concession area is handled by the state, even though the company is responsible.”

He said he hopes the Indonesian government will encourage neighboring countries bound by the multilateral ASEAN Agreement on Transboundary Haze Pollution to impose economic sanctions on companies that damage Indonesia’s environment.

The Indonesian Forum for Budget Transparency (Fitra) in Riau has also proposed that the management of forest and land fires be evaluated. Deputy coordinator Tarmizi said the routine budget for handling forest and land fires is quite high, but can’t be deemed effective as long as Riau fails to achieve its target of zero fires.

This story was first reported by Mongabay’s Indonesia team and published here on our Indonesian site on March 27, 2022.