JAKARTA — A court in Jakarta has rejected a lawsuit by a remote island community against a gold-mining operation that overlaps onto their villages, in a ruling deemed “problematic” by anti-mining activists.

In its April 20 ruling, the Jakarta State Administrative Court said it had no jurisdiction to decide the case, which it characterized as a civil matter rather than a state administrative one. Yet in the months since the lawsuit was filed in August 2021, the court held several hearings, and the judges even traveled to the Sangihe Islands for what was supposed to be a field visit.

“Why did they have to bother with proceeding to the evidence verification stage and field visit if in the end they’re just going to say that they don’t have the authority?” said Muhammad Jamil from the Mining Advocacy Network (Jatam), one of the lawyers for the Sangihe villagers. “The process is very problematic.”

By dismissing the lawsuit on a technicality, the judges failed to see the substance of the locals’ plea, Jamil said. He added that if the judges had bothered to look, it was very clear there was a litany of violations in how the Ministry of Energy and Mineral Resources issued a mining contract to gold miner PT Tambang Mas Sangihe (TMS). 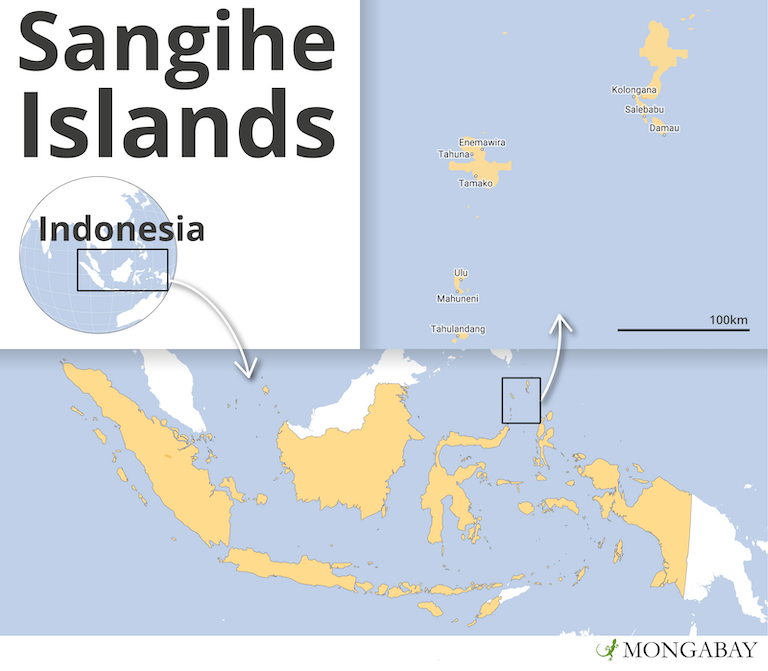 The case centers on planned operations by TMS on Sangihe, the main island in the archipelago of the same name that sits midway between the northeastern tip of Indonesia’s Sulawesi Island and the southern point of Mindanao in the Philippines.

The mining site — at 42,000 hectares (104,000 acres), an area more than half the size of New York City — covers the southern half of Sangihe Island, overlapping with 80 villages. Villagers say they’re worried that the mine will cause widespread destruction once it commences operation.

“We don’t want Sangihe to be mined because this is where we live,” Venetsia Violita Andemora, one of the villagers, said during a recent online press conference. “When our lands are permitted to be exploited, [our] agricultural lands will be destroyed.”

Even when TMS was still in the exploration stage, its activities were already proving disruptive, according to Venetsia. She said the villagers recently had their access to clean water cut off for four days because of road construction by the company.

Fears of more severe impacts prompted several of the villagers, including Venetsia, to file a lawsuit at the state administrative court in August 2021 against the mining ministry. The suit sought the revocation of the mining contract issued to TMS by the mining minister, Arifin Tasrif.

In their lawsuit, the Sangihe villagers listed what they said were clear violations that should have nullified the contract.

Third, the mining contract was issued without the company having obtained certain permits that are a prerequisite for mining to proceed. Among the missing permits is one from the Ministry of Maritime Affairs and Fisheries allowing mining on a small island. Another is what’s known as a borrow-to-use permit from the Ministry of Environment and Forestry, which is needed to allow mining inside a forest area.

The lawsuit noted that there’s a forest area called Sahendarumang located at the center of the mining concession, which also serves as a water source for locals. The Sahendarumang forest is also the habitat of 10 bird species, including the critically-endangered cerulean flycatcher (Eutrichomyias rowleyi), endemic to the island.

A fourth point raised in the lawsuit is that, because Sangihe is a small island, there’s no way TMS would be able to carry out underground mining. Instead, they villagers say, it would have to do open-pit mining, which is prohibited in forest areas.

“Technically speaking, there’s no way to dig for gold through open-pit mining in a forest area without altering the core function of that forest area,” the villagers said in their lawsuit. “Therefore, in order to mine gold from 42,000 hectares of area in Sangihe Island, all the trees would have to be cleared first.”

A final concern they noted is that Sangihe is administratively categorized as small island, and a 2014 law on the management of coastal areas and small islands expressly prohibits mining on small islands.

“The energy ministry’s decision [to issue the mining contract] is like a plan to murder and destroy [Sangihe],” Venetsia said. “The government surely knows that Sangihe is a small island. Then why does it still allow [Sangihe] to be mined?”

Jamil said he and the plaintiffs weren’t surprised by the court’s dismissal of their lawsuit because there were signs that the judges would rule against the villagers.

Alfred Pontolondo, an activist with the anti-mining movement Save Sangihe Island, agreed, pointing to several irregularities in the judges’ arguments during the trial.

He said during their visit to the island to inspect the damage done by the prospecting activities, the judges downplayed the impact. On the water pipe damaged by road construction, which left the community without clean water for four days, the judges said “let it be, because it has been fixed anyway,” Alfred said.

“So they ignored the existence of Sangihe as a small island,” Alfred said.

Jamil, the lawyer, also said the judges’ dismissal of the lawsuit, on the grounds that the policy being challenged was a mining contract and not a permit, made no sense.

“[The contract] is an agreement for the company to do something that’s actually not permitted [mining],” he told Mongabay. “If that’s not a permit, then what it is?”

The mining ministry said separately that the villagers should have exhausted all other administrative avenues of redress first, including writing to the president, before filing the lawsuit.

The villagers had sent a protest letter to the mining ministry in June 2021, but the ministry rejected their complaint, saying its decision to issue the contract complied with all the relevant laws and regulations.

Precedent for an appeal

Jamil said the Sangihe villagers would appeal the court’s ruling, “because we believe that the state administrative court had the authority to hear this case” based on the precedent set by another mining company, PT Mantimin Coal Mining (MCM).

In that case, residents of South Kalimantan province in Indonesian Borneo sued to have the permit issued to MCM rescinded. They argued that the coal permit bypassed a critical step: the environmental impact assessment, which requires local approval.

When the residents first took the case to the same state administrative court in Jakarta, the judges refused to hear the lawsuit, again citing a lack of jurisdiction. The residents then appealed the case all the way to the Supreme Court in 2019.

That court ruled in favor of the residents, ordering MCM’s permit to be revoked.

Given that precedent, Jamil said he’s optimistic the Sangihe islanders still have a fighting chance.

“There’s no statement [in the court’s verdict] that said the plaintiffs had lost [the lawsuit],” he said. “Instead, the judges only said the state administrative court had no authority to handle the lawsuit.”

Jull Takaliuang, an activist with Save Sangihe Island, told local media that the court never touched on the issue of whether TMS’s operation is illegal. Pending a definitive ruling, she said, the company should cease its operations.

Venetsia said the government should remember that Sangihe isn’t an empty island.

“It’s filled with locals and wildlife that are protected,” she said. “And Sangihe is an island that’s worth being preserved and handed down to our children and grandchildren. Let the mineral reserve stay [in the ground]. It’s not for foreigners, but for Indonesia and the children and grandchildren of Sangihe. Just let Sangihe [islanders] manage [the mineral reserves]. If Sangihe is still perceived as a part of Indonesia and North Sulawesi, then the government should side with us.”