by Elizabeth Claire Alberts on 13 April 2022

The world still has a fighting chance to keep temperatures below 2° Celsius over pre-industrial levels, if all countries meet their commitments to curb global warming, scientists say.

In a paper published April 13 in Nature, eight researchers analyzed inventory data and climate targets made by every country between December 2015, when the Paris Agreement was adopted, and November 2021, when COP26 took place in Glasgow. They suggest that peak warming can be limited to 1.9-2.0°C (3.4-3.6° Fahrenheit) if all pledges are met in full and on time. On the other hand, the authors found that revised climate pledges only have a 6-10% chance of meeting the more ambitious goal of keeping global temperatures below 1.5°C (2.7°F) as set out in the Paris Agreement.

The Paris Agreement may be slipping out of reach, but Christophe McGlade, study co-author and head of the energy supply unit of the International Energy Agency, said the results of this new study are a “cause for optimism.”

“What our paper shows is that the combined effect of achieving all of these net-zero pledges would lead to a temperature rise of around 1.8° [3.2°F] to 2° by the end of the century,” McGlade said in a press call. “This is big news, because it’s the first time that governments have come forward with specific targets that can hold global warming to below the symbolic 2° level.” 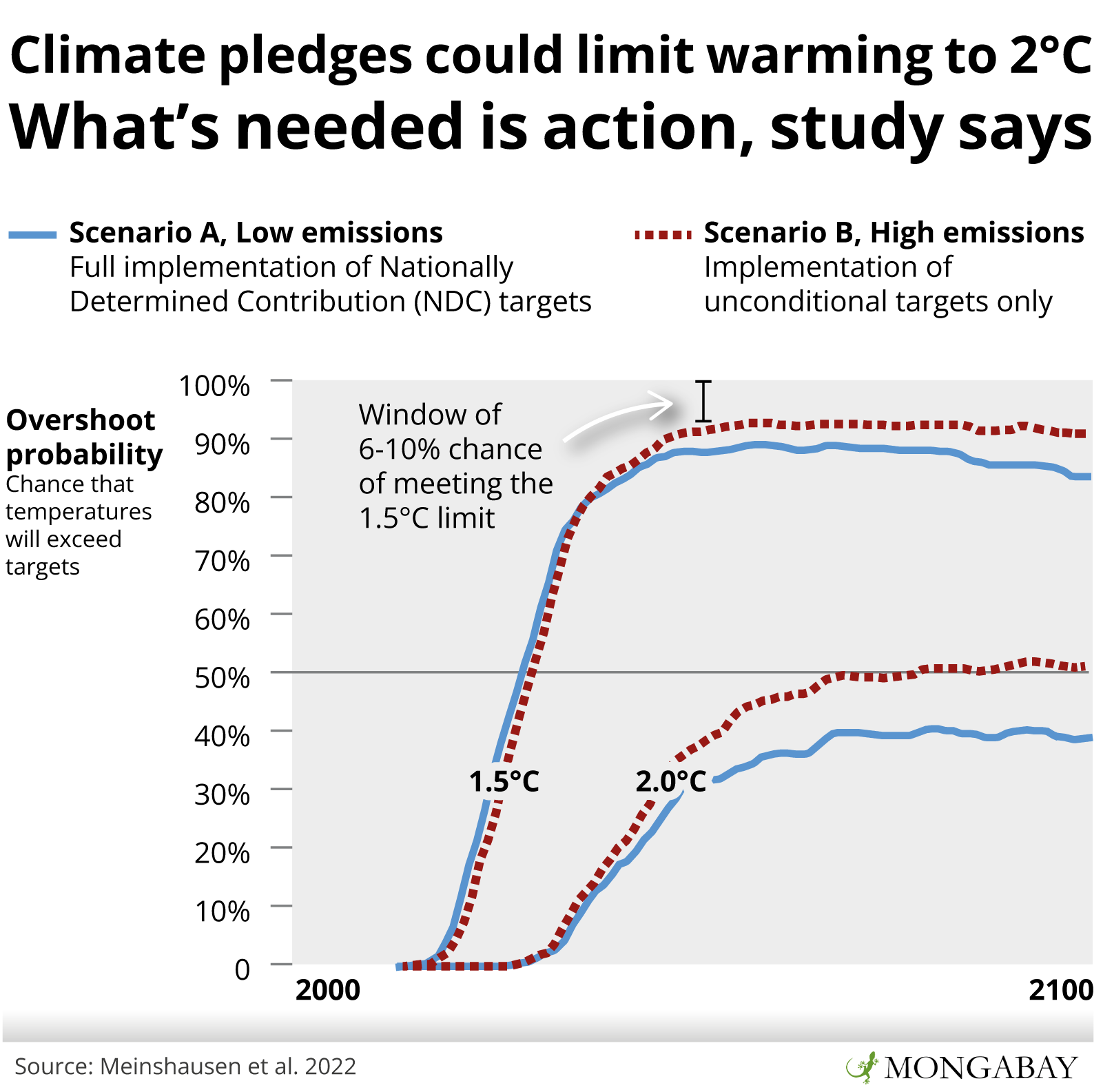 “In order to get closer to that we have to increase the ambition up to 2030,” Malte Meinshausen, assistant professor of climate and energy at the University of Melbourne, said in the same press call. “Otherwise, we’re going to blast through the remaining emission carbon budget for 1.5° just this decade.”

“Is our study an overly optimistic story?” Meinshausen said. “No, it is a quantification of the targets and pledges. But some people mistake it as a statement that the required policies are already implemented. Of course not. The sequential nature of policymaking is that countries analyze the options, then put targets forward that go beyond existing policies, and then underpin the new targets with new policies … but the targets must be followed by effective policy.”

But even as countries work to lower CO2 emissions, McGlade says it will be difficult to fully decarbonize sectors like aviation. If governments want to achieve net-zero emissions, he said, it might be necessary to remove carbon dioxide through various removal technologies. However, he added that the “availability of carbon dioxide removal and net negative emission technologies shouldn’t distract us from the importance of emission reductions over the period to 2030.”

The most recent report released by the United Nations’ Intergovernmental Panel on Climate Change (IPCC) said that greenhouse gas emissions must peak by 2025 and be reduced by 43% by 2030 to try and meet the 1.5°C target as closely as possible, with the ultimate goal of countries reaching net-zero carbon emissions by the 2050s. But achieving these goals would require rapid and large-scale action by countries worldwide, according to the report.

Owen Gaffney, a global sustainability analyst at the Stockholm Resilience Centre, who was not involved in the new study in Nature, said the paper indicated that a “real milestone was reached” at the COP26 climate summit that took place in Glasgow.

“[O]n paper at least, commitments may be enough to keep global average temperature just below 2°C,” Gaffney told Mongabay in an email. “There remain substantial uncertainties about how the carbon cycle and the climate respond to greenhouse gas emissions, and the authors are careful to point these out, so deeper cuts are needed to have a higher chance of keeping temperatures below 2°C. And of course, even this level of climate change carries with it substantial risks to all societies, including raising the risks of crossing abrupt or irreversible tipping points.”

Like the authors of the paper, Gaffney says that swift action on a global scale is needed to curb the worst impacts of climate change.

Banner image caption: Damselfish on the coral reef in Komodo National Park in Indonesia. Image by Rhett A. Butler.